Hello again everyone, today we’re taking a look at The Ribman’s sauces. All of them.

Because he doesn’t really make three different sauces, just the same one with slightly differing chilli content. And that chilli content doesn’t change the flavour anywhere near as massively as it did for the Melliculus Popping Candy.

But, while it is just three heats of one sauce, it’s a very interesting one that showcases a recent trend, allows me to explain some flavour science and provides an experience like little else.

If you don’t mind a bit of strong language, click that Continue Reading button and I’ll show you what I’m talking about. 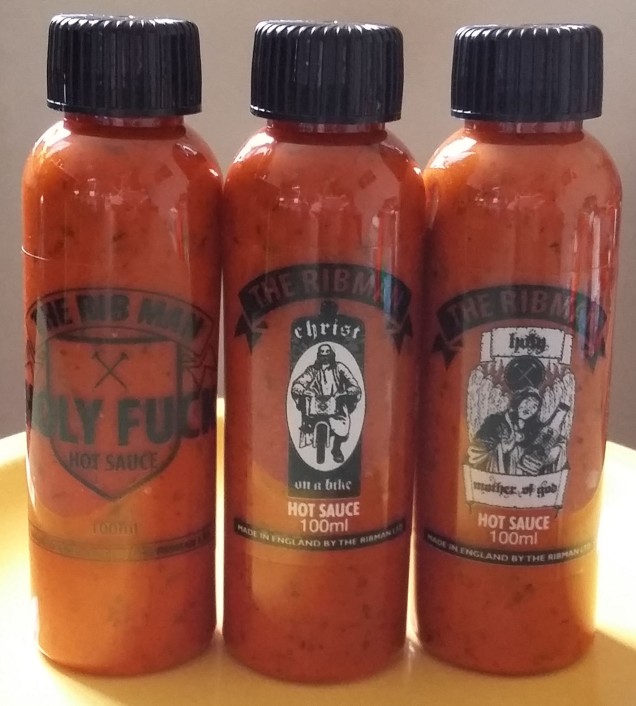 This is what he calls his “Holy Trinity”, three bottles of sauce labelled “Holy Fuck”, “Christ on a Bike” and, the max heat, “Holy Mother of God”.

They’re all scotch bonnet and dorset naga sauces and they all technically contain extract but not the sort you’re thinking of. The Ribman doesn’t use chemically concentrated heat but rather the purified juice of green jalapeños. For extra flavour.

In terms of their packaging, they’ve come to me in what he calls a travel pack of 100ml plastic containers. The full sized versions look to be in glass bottles but I prefer what I got, for reasons I’ll explain later. For now, let’s look at the labels.

These are made from clear plastic too, really allowing the look of the sauce to take the spotlight but still having enough print on them to easily distinguish the three.

Holy Fuck goes for the look of an old family crest with its shield outline and “The Rib Man” banner but the name of the sauce extends well past the edges of this, making it stand out even more than its bold text otherwise would.

There’s a heat scale on the side and tiny twin hammers crossing each other above the name but that’s otherwise it. It’s simple and it’s elegant but it doesn’t tell us much about the contents. It also doesn’t do much visually to compliment the name, though I think we can all guess why that might be.

Unlike Holy Mother of God, which embraces its name fully. It takes the exclamation and runs with it, placing an image of Saint Mary front and centre, between two banners that together form the product title.

But between her and the topmost banner, we see those hammers again, this time within a black circle that acts as Mary’s halo. And this clues us in to the fact that there’s more to this label than initially meets the eye.

That’s not Jesus she’s carrying, for one. It’s not even a swaddled baby but rather a disproportionately large bottle of sauce. And her wings? They’re the ribs she’s meant to go on.

It’s a clever little design but one that sadly comes out rather pixilated when forced into black and white with no mid shades.

And then we have my favourite design, the mid heat, Christ on a Bike. It’s not so cleverly done or anything, it is just literally Christ, on a bike, driving towards the viewer out of a white oval. All contained within a black rectangle that holds the sauce’s name and, when the same hammer circle is placed on the top, is oddly reminiscent of a phone booth.

It’s nothing fancy and, at this size, the hammers don’t even print properly but it’s whimsical. It’s just so silly and I love it for that.

Of the range, only the hottest tells us anything about the sauce from its artwork and even that is no more than we could get from the company name. They do, however, show us exactly what the sauce looks like with their clear bottles and heavy use of transparency.

They’re a wonderful bright orange from the combination of red chillies, dried tomatoes and yellowy olive oil. And we can see the herbs in them, making it oh so clear how thick these sauces are.

In fact, if they weren’t in squeezable plastic containers, I would have had a lot of trouble getting these onto my spoons. 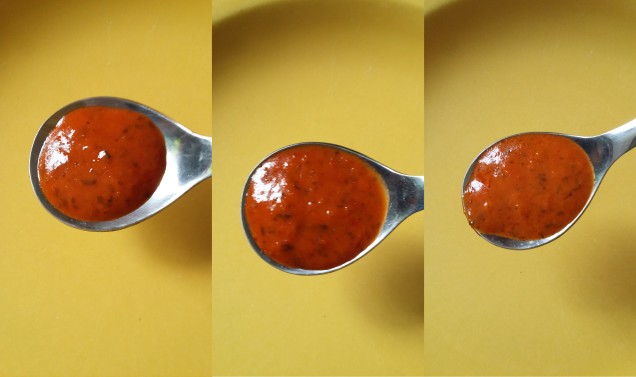 From left to right, we see them in heat order. First Holy Fuck, then Christ on a Bike and finally Holy Mother of God. The difference is quite interesting.

While they are all smooth, thick sauces, Christ on a Bike is just a little bit chunkier than the rest due to its extra chillies and, curiously, Holy Mother of God, despite having still more, is smooth again. It does, however, have a touch of red oil that the others don’t possess, hinting at a greater quantity of chilli juices within.

But, before I sit down and try these, it’s time for that science I promised you. These sauces, unlike the vast majority made in the UK, contain a good deal of olive oil. An ingredient that has recently started becoming popular in America but has, so far, hardly popped up on our shores.

What’s the significance of it? Well, it changes the texture. Completely.

You see, while we talk about layered “tastes” all the time, there are in fact only five that our tongue can detect: sweet, sour, salty, bitter and china’s favourite, the savoury meaty “umami”. Everything else comes from our sense of smell. Nearly everything, anyway.

Spiciness comes from natural chemicals that trigger the tongue’s heat sensors and creaminess comes into play when the tongue is coated with something so fine it can’t pick out the individual particles.

Usually, this would be some kind of melt in the mouth fat like cocoa butter or actual cream but, by adding oil to a chilli sauce, you end up with the resulting product blending down into a fine emulsion. A mix of ever so tiny particles that stay together not because they are bound to each other but because they are too closely surrounded by the particles that repel them to escape in any particular direction.

It’s the same trick that gives mayonnaise its creaminess and it works just as well here.

While I find the shear thickness of The Ribman’s sauces makes it a touch harder to appreciate, they do indeed both feel and even “taste” creamy. But that’s not even close to the extent of their flavour.

No, their flavour is intense, with the scotch bonnet coming through very strongly and some interesting olive notes coming from the oil but supported by their green jalapeño extract. And the scotch bonnets themselves are supported in flavour slightly by the nagas but also by the umami-rich dried tomato.

Yet it isn’t just the tomato that brings umami to the table as they all include some yeast extract to further boost its prominence, without going overboard and giving us that dark, salty flavour. And, while that’s the most prominent here out of the five things our tastebuds are set to pick up, all but sour are technically present in these sauces, though the bitterness of the dorset nagas is easily offset by the addition of sugar.

The maker hasn’t put enough in here to turn the sauces truly sweet but you can see its effects by comparing the range. Holy Fuck does have some slight sweetness going on, while the extra nagas in Holy Mother of God bring it down so much that the sauce becomes properly savoury and the herbs become a bit more noticeable.

Not that I could tell you exactly what those herbs are because their leafiness blends rather well into the olive-like aspects of the sauces. At a guess, however, I would say that one of them is probably bay or curry leaf.

Likewise, the garlic and onions feel a little hidden beneath the rich, heavy, creamy chilli and umami overtones but they are certainly there, rounding the sauces out.

Yet there’s one thing I’m definitely not getting from this sauce, even in the slightest, and it’s usually a main ingredient. Vinegar. These sauces are entirely vinegar free and not only that but free from any major acids.

It’s a pleasant change but, without any other preservatives, these are going to have a short usage time once opened. Perhaps the three weeks and mandatory refrigeration mentioned on the bottles is actually true this time.

Regardless, these are good sauces that combine chilli flavour and heat with strong, rich dried notes and a thick, creamy texture. They are more spreadable than pourable but definitely worth the effort. However, despite them being completely vegan, they are clearly meant for strong flavoured meats.

They will go on ribs, they will go on burgers, they will go amazingly well on hog roast and they may well even find a home on ham sandwiches or peperoni pizza but I simply cannot imagine using them for any vegetarian purpose besides adding flavour to a creamy pasta sauce.

Not to belittle that particular use, mind you. Just some of one of these and a good helping of double cream will simmer down into an excellent linguine sauce that can, if you’re not veggie, be improved yet further by some small crab or bacon pieces.

And, should you want to go the other way and avoid all animal products, The Ribman’s range have enough creaminess of their own that you could easily achieve similar results with another thickish liquid like coconut milk.

In terms of heat, they’re not the strongest naga sauces I’ve tried but the way the scotch bonnet hits first and the dorset nagas follow up as they’re beginning to die down does produce a very pleasant two stage burn which, for the Holy Fuck, peaks at the very top of a

that transitions from a slightly weaker mid tongue flame to that classic naga back of the throat burn.

Christ on a Bike then ups this to a mid

that, just as you think it’s over, has one final punch left in it. A blast of hard and fierce naga throat burn that really pushes the upper limit of that number.

And The Ribman’s hottest, the Holy Mother of God, tingles the tongue a bit more before blazing its way backwards and growing to a fairly serious

that makes the nagas known.

All of these sauces are a little slow to peak and have a similarly slow fade afterwards but, while the other two are a nice lingering glow, Holy Mother of God still feels like it’s raging away for a good minute or so after the hottest point. They’re not the longest lasting burn I’ve ever had but they’re definitely not fleeting, either.

All three qualify as hot but they go from a supermarket’s top end but tastier to ghost pepper levels that truly reflect their specialist chilli content.

Realistically, I would say that there’s very little reason to get them all if you know your heat tolerance. They’re so very similar to each other that, if you’ve tried one, you’ve practically tried them all.

If you want something rich, strong flavoured and quite clearly scotch bonnet to slather on meat, though, any one of these will tick every box and do it with a uniquely creamy texture.

I would certainly recommend one of them but, while Christ on a Bike is my personal favourite for both flavour and label design, there’s so little in it that it’d be better to just get the heat that most suits your palate.