Happy tuesday again people, it’s time for us to return to wales and experience a second sauce from Chilli of the Valley. One with the same pineapple and coconut flavours that ruined Saucey Lady’s Fireman’s Watch for me but one that gives them the centre stage, instead of pairing them badly with other, more savoury fruit.

This one is their Calypso – A sauce designed to mimic the classic piña colada cocktail’s flavours, with pineapple, coconut and rum.

And this time, I see no reason why they won’t work.

To be truly sure, though, I’m going to have to put this sauce to the test. 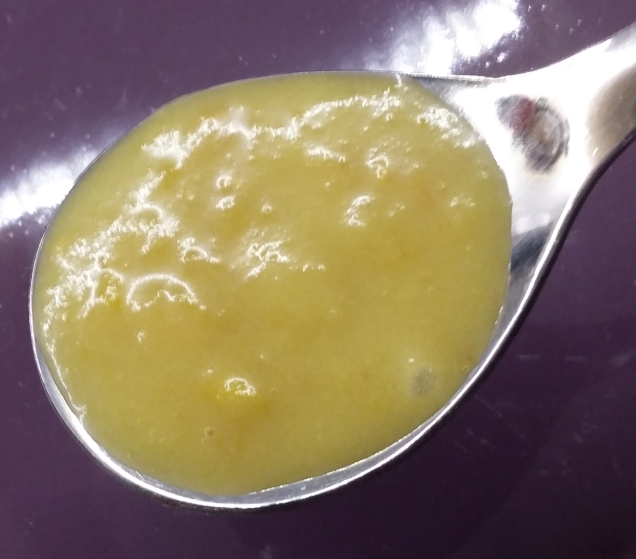 It pours well, proving neither too thick nor too thin, but it is on the thinner and quicker flowing end of just right.

To make up for this, however, it’s filled with chunks of yellow chilli, suspended perfectly within. To the point where I’m not even sure I needed to shake the bottle.

I did anyway, of course, to ensure the perfect mix and most accurate review, but I’m definitely impressed by the sauce’s consistency. Especially after tasting it.

Calypso doesn’t just gain a glossy, milky appearance or coconut flavour from its coconut milk. It’s been made downright creamy by it.

The powder may only account for 4% of the bottle’s contents but it seems it still provides enough of the fruit’s healthy, saturated fat to form an emulsion. The kind that I explained all the way back in my review of 🔥 The Ribman 🔥.

It’s so smooth, silky and delightful that the crunch of its thick-walled peppers comes as a surprise every time. One that lends extra depth to the experience, before we even start talking about the taste.

Which is good because their taste is actually pretty minimal. A mild yellow chilli one, with a very tiny touch of oakiness to compliment the rum. I can say with reasonable certainty that they’re shredded golden cayennes but I’m not sure I’d be so confident if they didn’t have such a distinctive feel.

No, the vast majority of what they do for this sauce is to add texture and a sharp, high

with the same stinging feel as a fresh jalapeño or other annuum-type chilli.

Which is ridiculous because the company’s 🔥📽️ Hulk juice 📽️🔥 was rated one chilli higher on their scale and had almost no heat at all.

Yet, again, it adds contrast to the smooth, rich, creamy feel and flavour of the sauce. A flavour that, while mostly coconut, does also have mild elements of tropical pineapple and even milder ones of its yellow chilli and white rum.

I would personally prefer if the rum was darker, to add a little extra depth, but it’s a wonderful blend all the same. Albeit one that, sadly, fails at the last hurdle.

It picks spirit vinegar, the sharpest of all common vinegar varieties, as its preservative. A vinegar that makes sense with its sharp burn but not with its smooth flavour. And it really detracts from the whole as a result.

Between that and their terrible heat rating, it seems to me as if this company have stumbled into something almost perfect, rather than having had any idea that they’d create something so creamy and well textured ahead of time.

It’s a very special sauce in some ways and a disappointment in others. I can’t say that I’d recommend it but I can say that I’m very glad that I tried it. I have, after all, learnt a lot from today’s review.

And, while I don’t recommend this one, I can still tell you how I’d use it: In tuna mayo or a creamy curry, be it a yoghurty indian dish like a korma or passanda or a thai-style one with coconut already included. Perhaps even one with prawns, since this is a sauce well suited to seafood, but I wouldn’t just pour it over fish.

It needs that creamy base, alongside its own, to mask the sharp vinegar that it uses. Otherwise it would, as the company suggest, also go great with chicken, rice and a decent subset of caribbean meals. Yet, even then, I don’t see it ever going on pizza.

It’s a great product rendered niche by a single ingredient. Pretty much the opposite of what I said about Sood’s Chipotle but a perfect example of the very same point: Always think about what your vinegar is doing to the flavour, sauce makers. It’s not just there to fight mould.

And that’s about it for this one. Its white label with green outline and red text is neither good nor bad and fails to prove noteworthy in any way beyond its inaccurate heat rating.

All that remains is for me to type out the ingredients list:

3 thoughts on “Spirit of the Caribbean”