Today, we’re taking another look at my Hot Ones-style line up because it’s been a whole year. Time in which the range of sauces I can pull from has changed quite dramatically. Yet my love for the show has not. 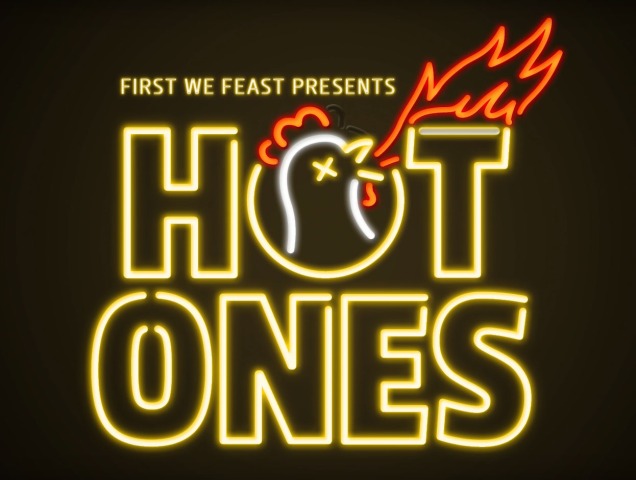 You can read all about that and see what the old line up was in last year’s post but, this time, we’re focusing solely on the sauces. So read on for what new ones I’ve chosen, which old ones have stayed and why I’ve made the decisions that I have.

The first change that I’ve made is a sad one. One that had to happen because last year’s favourite mild sauce, the 💀 Cherry Chipotle “T.N.T.” 💀 no longer exists and nor does the company who made it.

I would have loved to have kept their product in this spot but it’s just not possible. So, instead, after a little deliberation, I’ve picked out the Screaming Chimp’s Vic’s Ol’ Smokey for the first sauce. Slightly sweet, somewhat smokey and with indian spice notes alongside its mild heat.

Then, second in line, I really wanted to say Rubies in the Rubble’s Blueberry BBQ but I couldn’t. Between being a limited edition and having whole berries in it, I just don’t see it working out.

There were many new contenders for this spot, including things like Mahi’s Red Jala, The Crafty Bustard’s Pineapple, Scotch Bonnet and Sesame Oil and Simpson’s Seeds’ Funky Monkey but there was a clear winner just because of how unique it was:

The Cornish Chilli Company’s Red Snapper – A sauce with a stunning, sharp tartness that’s just perfect on greasy or fatty foods like wings. I couldn’t not give it the number two spot. Especially when the more traditional style of fruity sauce is already covered by number three.

Because that third sauce is staying what it was.

I’d love to give it to East Coast Chilli Co’s amazingly creamy Chance or Sauce Shop’s fancy Green Sriracha but, once again, it has to Chilli Pepper Pete’s Dragon’s Blood Hot Fruity. A hottish mango sauce with a unique savoury element from the earthier fruitiness of its delicious scotch bonnets.

And so, with no real barbecue representation showing up yet, of course the next one’s staying the same as well.

I’d love to showcase something like Mahi’s Green Savi for its green flavour and unique chilli or 🔥 The Ribman’s Christ on a Bike 🔥 for its amusing title but the first of those is too vinegar-heavy to use here and the second seems a little too thick to coat as thinly and evenly as mimicking Hot Ones demands.

No, this spot stays with The Chilli Alchemist and their Smoke Potion Magnum Opus. A nice, comparatively gentle, dive into the world of superhots.

Perhaps the next one, the number five sauce, aught to remain the same as well. It is, after all, my most read review.

Yet, regardless of whether I really should or not, I’m going for a different four and a half heat. One that actually hits more like a five most of the time. The award winning Fiendfyre from the Unusual Chutney Company.

Plus, I like the thought of having a green sauce in here to switch things up a bit. Especially after such a sweet barbecue one.

From there, we’re skipping over the five and a half heat of the old line up’s sixth spot and going straight past it’s seventh to a brutal six and a half.

We’re going to be using Doctor Burnorium’s Psycho Juice Roasted Garlic Ghost as this year’s sixth sauce. And yes, I know I didn’t review it too kindly but it’s not a bad flavour. It’s just not really the one that it was sold to me as.

It’s still a good, abnormally hot, ghost pepper sauce. Just one that doesn’t stand out as garlicky and so probably isn’t much different to his 70% version.

But our new number seven is exactly what it was marketed as. A new, super hot, fruity and slightly tart mustard sauce using the latest big name UK superhot, the Dragon’s Breath. As a UK reviewer, there was no way that I could leave The Chilli Pepper Company’s crack at using it off my list.

Then, eighth in the line up, the one non-UK sauce and one of my most hated ones but one that just has to have a place in my mock Hot Ones: Dave’s Insanity.

It is, in my opinion, utterly dire. Even worse than Da Bomb’s Beyond Insanity. But, as Da Bomb referencing it directly in their own sauce’s name might suggest, it’s also a real big deal.

As the sauce that popularised the use of chilli extract, it was already on my radar last time around but, given 📽️ Ink’s extreme reaction on camera 📽️, I don’t think I can leave it out any longer.

So what tops the original extract sauce? Why the UK’s original, of course, from Chilli Pepper Pete. Last year’s range topper, the original Dragon’s Blood.

But we can go hotter, this time. Not to the hottest thing I’ve ever tried, because that would be dangerous, but still a lot higher than where the Dragon’s Blood range tops out.

And that’s everything. All ten of this year’s line up.

Let’s see how it looks:

So that’s the challenge for this year, everyone. If you fancy a UK hot wings line up, that’s the one that I suggest, with nine of its ten sauces made right here in britain and the one that remains from overseas an easy import.

One thought on “Return of the Wings”