Well, it’s my birthday again but it might not be a happy one. Not when you’ve chosen what was probably the hottest and definitely the most expensive option on my poll.

This year’s extract sauce tasting is unlikely to be as brutal as 🔥 my first year’s 🔥 but I’m sure that it’ll at least give last year a run for its money. And it is, once again, two sauces.

Two sauces that I can’t show you until after the “Continue reading” button because one of them uses the F-word.

That sauce is, of course, Wiltshire Chilli Farm’s “fucking hot” God Slayer. One of the most famous UK extract sauces and one that stands alongside their newest hottest, “Regret”. A sauce that’s a little hard to see here because of its black on black label.

Held in my hand, however, you can see the two different shades and shines, that allow Regret to still be legible, despite its sinister all-black design: 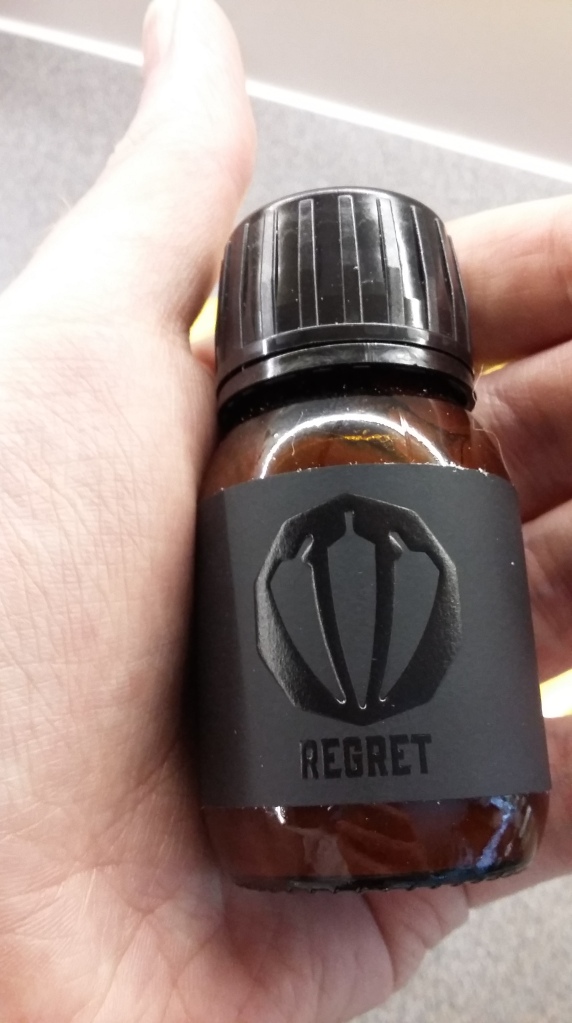 And this also gives you a sense of scale. These bottles might not be the biggest but they aren’t exactly tiny, either. Their chunky lids just make them look it online.

In person, though, this gives them the appearance of something small and deadly, scaled up. It carries a lot of visual weight and gives Regret an almost grenade-like silhouette.

It looks truly, irredeemably evil in a way that the God Slayer doesn’t, with its blue-edged, shiny, almost iridised text. Yet that rough font and its sweary warning are very high impact themselves. It looks dramatic, even if it isn’t straight up sinister in the same way.

I like both of them, visually, but the fact that Regret pulls of the same level of attention grabbing without anything I have to censor and the fact that its logo and name appear to have been done in thick yet crisp and brushless paint for a raised effect both win me over. In a well lit room, Regret is my favourite display piece.

But I’m just stalling. You and I both know that that’s not what you’re here for.

You’re here to see me suffer: 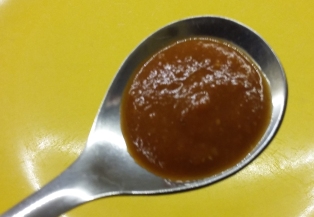 Two thick sauces, both smelling rich and dark with a touch of volatility to them. Volatility that presumably comes from their bourbon content. Just one of the many ingredients that the company tells me were added to slow their intense burn and let the flavour shine through first.

Alongside that, I can both see and smell the savoury tomato of the God Slayer, complimenting that garlic richness. But its not as obvious in the Regret since the darkness takes over in both appearance and aroma.

Interestingly, the Regret actually has more sweetness on the nose and less of the usual, distinctive extract smell. I can tell, however, that it doesn’t have less extract, because of just how dark it is.

Finally, just a hint of green herb – Oregano perhaps? – comes through at the end of the God Slayer.

Both have a lot of depth to their scent profiles and it’s amazing just how different they are when the only difference is the extract and one of their two chillies. I like the smell of both of them but they scare me. Neither one smells mild.

Having said all I have to say about their looks and aroma, though, it’s time that I dug in: 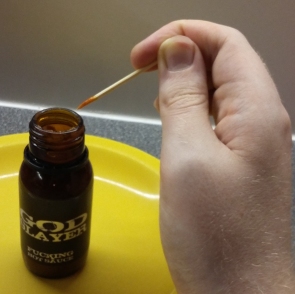 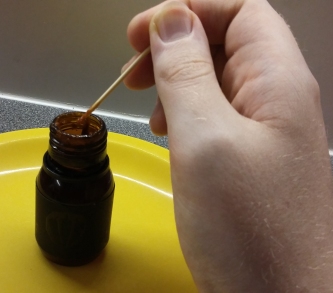 So, let’s start with the Godslayer. It’s a little sweet and quite tomatoey upfront, as expected, coming across almost like a tomato soup in some ways but with a not insignificant amount of garlic. Something that I’m sure provides its sweetness but that also gives the sauce a savoury element that I expect that the chillies and herbs are contributing to as well. Not that either of those is particularly obvious. And I’m not getting much that isn’t immediately obvious, since I have only seconds to concentrate on the flavour before the rapid onset of a sharp, stabbing,

The burn on this sauce is delayed, certainly, but not nearly as much so as its makers had suggested.

What is worth noting, though, is that the touch of darkness that acompanies it tastes more like bourbon than like extract. Perhaps what the alcohol is really doing for this sauce is tempering that chemical flavour.

For Regret, though, its aroma is very much false advertising. There is sweetness to this sauce and an almost caramel note upfront from the bourbon but its bitter, slightly metallic edge comes in almost immediately to rip that one redeeming quality away from you.

of this sauce is brutal but it very much sacrifices its flavour to reach it.

The 12 million SHU extract in this sauce sadly cannot be tamed and rather ruins the taste. It’s a real shame because its aroma was actually the more pleasant of the two.

There is one quite interesting take away fact from it, though.

Since only the extract and one of the chillies has changed, it seems pretty clear to me that its the use of habaneros – Presumably orange ones – over the generic red chillies in this second sauce that is bringing out the bourbon. Or just a much higher percentage of bourbon in the second sauce but that seems unlikely, given how far up the ingredients it already is.

Here are the two lists so you can see for yourself:

We got a good look at the effect of a single ingredient in yesterday’s Sood’s sauce  but it’s rare that I get such a good chance to compare near-identical recipes as this. So, aside from setting my mouth ablaze, this has actually been a rather informative experience.

Not, perhaps, as flavourful as some of the better natural sauces but hey, some sacrifices have to be made if you want to more than triple nature’s top heat.

Plus, bearing in mind my findings in this review, I would like to suggest to Wiltshire Chilli Farm, if they are reading this, that they try out a batch of God Slayer with habaneros to see if that really does bring out the best in it.

As for how to use these sauces of theirs, well, the base mix of tomato, garlic, bourbon and a touch of ghost pepper is nothing too out there. It will, like other tomato-based red chilli sauces, go with most dishes. Just in a much smaller quantity and stirred through as well as you can possibly manage.

Con carne would, however, be my first choice for either of them.

11 thoughts on “Dying in Style”