Happy tuesday everyone, let’s take a walk down memory lane.

This here is the Insanity Sauce from Dave’s Gourmet, more commonly known as Dave’s Insanity.

And it lives up to its name. Described by its maker as “The original hottest sauce in the universe!”, Dave’s Insanity was one of the very first products to include capsicum oleoresin.

That’s chilli extract to you and an industrial strength additive to the manufacturers of his day. It was never intended to be the third largest ingredient.

Back in 1993 when it was released, no sauce was Dave’s’ equal, with its closest rival in heat rating being dried habaneros themselves.

In fact, even his later ghost pepper sauce had to include extract just to maintain the same heat level. Which is crazy, considering the ghost is almost three times the strength of the hottest pepper of Dave’s day.

But let’s take a look at what all this means for his sauce: 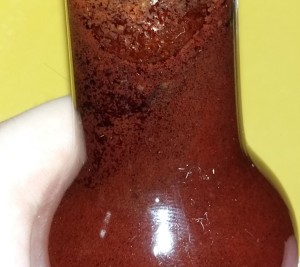 It shakes up well but will always separate back out to this. A thick red sauce, bordering on but not quite reaching a paste, with black dots streaked throughout. Dots that, if you ever forget to shake the bottle, would royally mess you up.

Dave doesn’t say exactly what strength of extract he’s using but it hardly matters. A single drop of any strength I’ve seen will set even my mouth utterly on fire for a good long while and the weaker ones don’t tend to look that dark. At a glance, I’d guess it’s well over the million mark.

So if you ever eat this sauce, make sure it’s well mixed. Every. Single. Time.

But you’re probably wondering by now, how hot is the sauce itself? Well, the official numbers on Dave’s Insanity place it at around one hundred and eighty thousand scoville, roughly the average heat of a dried habanero.

So, as someone who eats habaneros fresh, this should be no problem for me, right?

Well, as Dave and many others have said, the numbers can be misleading and water content affects test results drastically. The only real way to find out how hard this is to handle is to crack it open and have a taste. 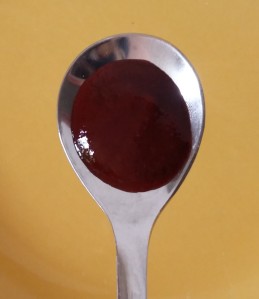 As I mentioned earlier, this sauce is thick. Really thick.

Why? Because the fifth ingredient, cane vinegar, is the first proper liquid in this sauce. The main two ingredients are chillies and tomato purée and Dave has even added xanthan gum to thicken it, though I suspect that was more to keep it from separating completely.

But what type of chillies has he used? I honestly can’t tell. They don’t have the flavour of a habanero or scotch bonnet, they don’t have the soapy heat I get from bird’s eyes and they simply don’t have any distinctive qualities to them that I can discern over the powerful chilli and tomato concentrates.

The product contains onions, garlic, vinegar and a miscellaneous assortment of spices but literally all I can taste is tomato purée and a similarly concentrated version of your standard supermarket variety red chilli flavour. Though it’s not too bitter like some extract sauces, some fingerfuls do have a slight bitter element to them and I am not at all impressed by Dave’s Insanity’s otherwise lacklustre taste.

Heatwise, it’s not the hottest thing I’ve ever tasted either but then it wouldn’t be. Dave’s Insanity was made decades ago when the world didn’t know hot like it does today. Dave was a pioneer, using oleoresin like no one ever had before and paving the way for far hotter sauces. He was still, undeniably, the hottest of his time.

I rate Dave’s sauce at a

Not quite as hot as the hottest natural sauces now on the market but only a smidgen away. This stuff is insanely hot and I doubt I will finish the spoonful I poured. It dies down reasonably quick after its savage attack to both point of contact and the upper back of the throat but you can feel a definite warmth where it’s been long afterwards and all the way down.

As a sauce, this stuff is not pleasant but as an ingredient, it certainly holds potential for livening up anything where that tomato purée and pepper flavour might fit in. Pasta sauce, mexican style chilli, soups, noodles, you name it, this will add a ton of heat.

Really though, if you don’t know Dave’s Insanity already then you’re probably not thinking of buying it as an ingredient or a sauce.

Chances are, you’re more interested in it as a display piece. A piece of hot sauce history you can show off to your friends and co-workers and say “this was the original extract sauce”. Something seriously challenging you can dare them all to try without killing them more than metaphorically.

That’s what Dave’s is for!

And with that in mind, perhaps it’s time we talked about the packaging.

A bold, black, glossy label adorns the fairly standard looking bottle this dark red sauce comes in, with a bright yellow line top and bottom to separate the two otherwise low-contrast colours. The name “Insanity” is in an equally bold red, all capitals for emphasis, positioned over a block of the same yellow as used in the boundary lines.

It’s clear that black and yellow, nature’s warning colours, were the main theme of this packaging, with the sheer quantity of plain black around the sides giving it a very sinister feel.

Behind the sauce’s name, however, we have a white oval that names the company in a less weighty font “Dave’s Gourmet”. Still in all caps but this time black to contrast the white, three red chillies seperating the words on each side.

Inside the oval resides a lovely picture of a sunglasses wearing chilli relaxing on the beach. Its comparatively soft and low intensity colours making it seem almost like a watercolour painting. It’s gentle, it’s welcoming, it’s fun. It looks like a small, caring business logo, not the sign of a murder sauce.

It fits with the “Gourmet” but seems way too calm and lovingly crafted for “Insanity”.

But then, so many sauces overhype themselves massively. Dave’s is more laid back. It knows what it is.

It’s “The original hottest sauce in the universe!”, as well as a potential automotive stain remover. It’s an “INSANE+” heat with a one drop recommended dose. It’s neither child nor pet friendly and should be kept away from those with heart or lung problems.

And it’s got all these warnings and claims on it but it’s not in your face about it. They’re all in plain white text, scattered around the label.

The same label Dave’s Insanity has been in since the nineties.

Ultimately, I can’t say I like this sauce but it’s very much a product of its time. A piece of real hot sauce history. And for that, I respect it.