Happy tuesday, spice lovers and welcome back to another fiery food review.

Recently, we’ve been looking at a lot of rather strong sauces – Anywhere from regular “hot” to pushing the upper limits of what we all know to be possible – and last week’s “mild” cranberry chocolate did nothing to bring the heat back down. So today, I’d like to show you something more medium that I’ve been holding onto for quite a while:

I discovered this barbecue sauce all the way back in twenty-seventeen and was so impressed that I talked my local chilli shop into stocking it. But, to my dismay, it was discontinued before I could put my love for it into words online.

Only recently has it resurfaced, giving me the opportunity to talk about it oncemore, but I’m not going to let it get away from me again. So please, read on and discover what it is that makes today’s product my all time favourite from Hot-Headz.

Its label is unassuming. Light text against dark blacks and browns for maximum readability, yet no imagery beyond the flaming silver circle used as the company logo.

Hot-Headz don’t show us the chilli with this one, because it’s not the key selling point, but nor do they show us anything else. All we get from the bottle is a colour scheme implying darkness, molasses and smoke. An implication of the product type, certainly, but not what sets this barbecue sauce apart.

To tell what really makes it tick, I’m going to have to pour a spoonful. 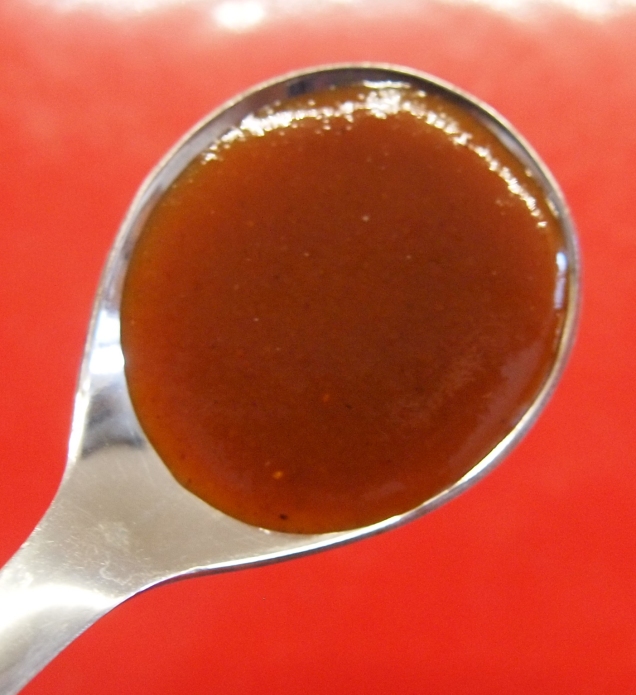 Out of the bottle, we get a far better look at the sauce. At its smooth, slightly syrupy consistency, yes, but also at its lighter, warmer shade of brown. One that, when swirled around, leaves a fine trail of black, red and brown flecks that you’d likely never see in a standard barbecue base.

On the nose, the Apple Chipotle Bourbon is like most other barbecue sauces – sweet, woody and dark, with a bit of a tang to it. But we know that there’s more going on in this one. We’ve seen the spices and seen how much the apple lightens its appearance. So now it’s time to try it.

From the moment it hits my tongue, it’s sweet, first and foremost. It tastes of brown sugar and golden honey but there’s an undercurrent of something smoother and more savoury. A sort of woodiness that blends with the soft, oaky flavour of browned apples, the earthiness of the bourbon and the subtle, sharper oak tang of cider vinegar.

It soon becomes smoky, highlighting the chipotle in the sauce, but the woodier notes still remain underneath, pairing beautifully with the hit of cinnamon that comes in with the heat. A spice that, as you might expect, works just as wonderfully with the apple’s subtler fruity side.

The heat, though, is quite little, at first. There doesn’t seem to be a tonne of chipotle in Hot-Headz’ barbecue sauce and, while there is also naga to back it up, the slow burn of the superhot, combined with all the sugars in the sauce, means that it strikes quite late.

that hits across the roof of my mouth but it’s not that high medium that makes this burn enjoyable. It’s the gradual build and the lingering warmth – Furthered by the cinnamon, I’m sure – that I find particularly satisfying. As well as, of course, the previously mentioned blend of flavours.

Sweet, sticky barbecue, strong, woody undertones, a good level of soft fruit, a little bit of earthy booze and a good helping of just the right spice to tie them all together. Along with sensible amounts of two really tasty peppers.

It’s quite obviously a sauce that was made to pair with pork but any rich meat, pre-smoked or not, will go beautifully with the Apple Chipotle Bourbon. As will things like pizza, eggs and macaroni cheese.

If it goes with barbecue sauce in any way, chances are this one will make it even better.

Here’s what goes into it:

And here are a couple of links to the chipotle morita and ghost pepper pages of my pepper encyclopedia – An easy way to see what else I’ve had with this sauce’s chillies.

Just don’t expect other naga products to be anywhere near this sensible of a heat.

5 thoughts on “The One that Got Away”