It’s my birthday again! Today, I turn twenty-seven and, like every other year, I rate some extract sauces. Ultra-hot chilli products that surpass the natural limits of my scale by using a chemical concentrate of chilli’s capsaicin.

So, while I would normally bring you a recipe post on a weekend, like this, I’m putting my cooking on hold for a bonus review of my annual suffering.

Yet I have something a little different for you, this year. A sauce that comes not from an artisan chilli company but from the garlic specialists of the Isle of Wight:

The Garlic Farm’s fang melting “Vampire Botherer” – To my knowledge, the only ever craft sauce to blend green chilli and chilli extract.

It’s not going to be as insane as today’s other item, given that a mere tenth of a percent of it is actually capsaicin concentrate, but I feel like its uniqueness is worth addressing, before I dive head first into the real deep end of the Five Finger Death Punch.

So, starting with The Garlic Farm’s almost certainly milder offering, I can’t say that it screams heat at me. It’s in gothic font and parchment brown, to match the old, traditional, vampiric theme, with a bright, yellowy-green banner behind the name to highlight its jalapeño and lime content.

The company logo could stand to be a little bigger and the “Great bulbs of fire.” tag line less hidden around the bottom but, between them, they do convey its garlic content. The one thing that it doesn’t say, visually or otherwise, is “intense burn”.

I’m going to have to crack it open and see if it actually has one.

As I pour the sauce, I get a nose-full of something creamy and almost pickled – The scent of a well-emulsified vinaigrette, not a hot sauce – and I can’t help but notice little oil droplets collecting on the neck.

Not red ones, though, or, worse yet, brown or black. No, this oil is clear. Pure rapeseed (canola, to my US readers), untainted by the oleoresin used to extract chilli heat.

To all inspection, this appears to be an ordinary salad dressing, filled with herbs. Yet looks can be deceiving.

Its taste is smooth but bold, full of rich, garlicky goodness and just a hint of mustard. The herbs – Coriander and parsley – take hold as the garlic dies down, without ever becoming overbearing, and the jalapeño supports the flavour of this sauce every step of the way.

But its kick comes in late – Much later than I would expect from the pepper – and it comes in hard.

Not extract hard, mind you, or even super hot pepper hard. Just around the strength of the hottest fresh jalapeño that I’ve ever had. A warm, spiky,

in my throat which fades ever so gradually over the course of a few minutes and, somehow, lacks any of the soapy feel that I normally get from strong annuum-type peppers.

As something that was meant to make me suffer, the Vampire Botherer is a bit underwhelming but, then, I expected it to be. It’s not advertised as extremely hot, it’s sold on its flavour and that flavour is a winner. A birthday treat that I’ll keep on using throughout the year, rather than just in the occasional challenge.

It’s going to go great over fish, pasta, salads and new potatoes, while today’s second sauce is the one that’s going to put me through pain.

My spoonful, of course, being purely for show. I’m trying it on a cocktail stick, like the other crazy extract sauces that I’ve had, because I want to be able to taste it before the suffering takes over.

Yet, despite my best attempts, I don’t get anything too special from the flavour of the Five Finger Death Punch.

It’s got a little bit of brightness from its cider vinegar and just a tiny touch of sweet from muscavado sugar. There’s a small vegetable element from its celery and I can certainly taste the onion in it but the rare pipali long pepper is completely lost on me. Which, honestly, I half expected, due to how easily the flavour of that peppercorn cooked off in my tofu taste test.

For me, the two flavours that dominate this sauce are miscellaneous red pepper – Part bell and part superhot but carrying no specific nuance to tell me what type – and the bitterness of the extract that it uses.

It’s not a bitterness that ruins the sauce and it definitely doesn’t have the overcooked chemical flavour of some of its competitors but it’s not exactly subtle, either. And it gives a hell of a kick.

This sauce has a roof and sides burn that starts with the sting of a gently roasted naga, before ramping up to a

that only extract could provide.

It’s not the hottest that I’ve had but my refusal to down a spoonful still seems justified. This sauce is brutal. And, unlike just about every other item in its heat bracket, it’s certified both vegan and gluten free.

Five Finger Death Punch caters to the vast majority of dietary needs and, for any hardcore non-alcoholics among you, it’s going to prove a good alternative to Wiltshire Chilli Farm’s Godslayer. Even if, flavour-wise, it’s rather less rich and dark.

It’s still going to go into con carne or bolognese and would, if mixed into something less intense like, say, ketchup, go very nicely over roast meats and burgers. Use a drop to spice up baked beans or why not try it in a stupidly strong bloody mary?

As a fairly straightforward, red chilli flavour, there’s not a lot that you can do to go wrong with this sauce, other than the obvious overusing it.

It’s not a personal favourite or anything but I definitely don’t hate it. Here’s the ingredients list:

A far longer list but one that details the exact strength and quantity of its (more subtle) artificial heat addition. I appreciate that openness just as much as I enjoy the product’s flavour and that one is one that I’d definitely recommend. Especially if you’re a jalapeño fan looking for hotter.

And that’s all for this special saturday post but there are a couple of other things that I got for my birthday, this year. Two items that were sent along with this order from Burning Desire.

I won’t show you them right now but you’ll be seeing them both soon and, in the mean time, here’s the lovely surprise birthday message that they gave me: 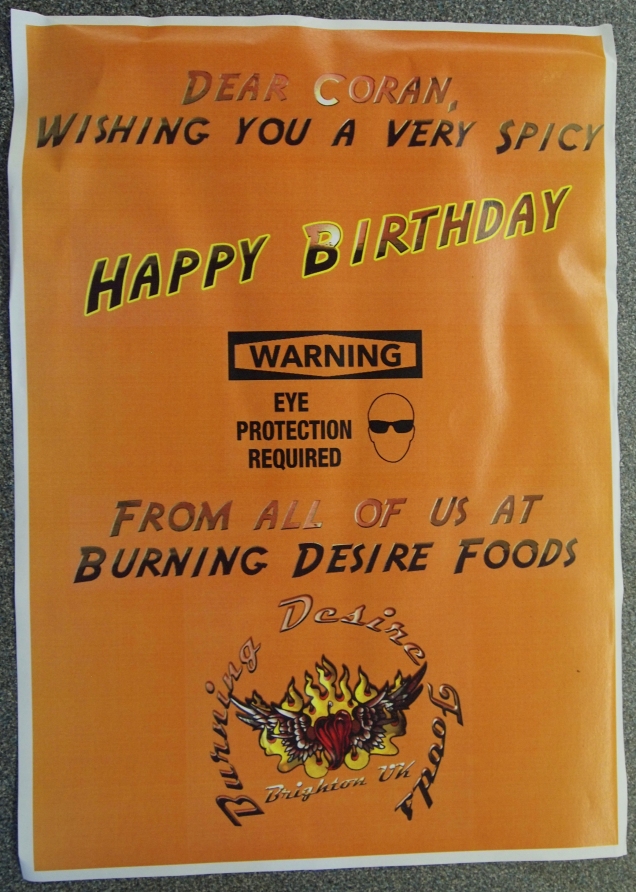