Happy thursday again, spice lovers. Today we’re looking at a sauce, despite it being a bit of a departure from my regular upload schedule.

Why? Because, like with The Chilli Pepper Company’s second Dragon’s Breath, it’s not a new sauce. It’s a revision of an older item using a possible “reaper killer” pepper.

Of course, the situation isn’t quite the same here. Today’s isn’t a new “reaper killer”, or even one that wasn’t in the sauce before, but this latest version of Burning Desire’s Critical Mass uses significantly more FG jigsaw than the old. And it was already a ten out of ten last time.

You can see the increased chilli in its colour – Now much nearer red than its old, yellow-tinged orange – and I’m a tiny bit scared. If this sauce is even a smidge hotter than it used to be, it’s going to be the hottest non-extract one that I’ve written about and I’m going to have to change my entire numbering system to account for it.

But, much as I expect it to hurt, I’m still grateful to Jason for sending this to me. For including it with my birthday purchase.

Why? Because his Critical Mass isn’t just pure chilli. It’s also a delightfully tropical, passion-fruit and mango concoction that I’m happy to have on hand for my cooking, oncemore.

It’s housed in the same glass medicine bottle as it used to be, with a very similar label – As golden and hard to photograph as ever – And the same flaming heart logo. Yet Jason’s clearly playing to more of a mass market this time around.

The “Isotope X33” logo has been shrunken down to make room for a piece about the sauce’s handcrafted, small batch nature and all reference to the jigsaw chilli has been removed from the front label. Despite it now making up as much of the product as the reaper does.

Personally, I disapprove but I know why he’s done it. It takes a serious chilli lover, like myself, to appreciate the inclusion of such a pepper, while the average festival attendee will be far more interested in the big name world record.

Playing up the sauce’s craft element and reaper content will draw attention, while jigsaws are more likely to confuse the masses than to entice them, sad as that may be.

But this is still a jigsaw sauce. Twenty percent, even, rather than the previous fifteen. And here’s the ingredients list to prove it:

It’s lost the onion, as well, but that seems to be the only other change. Not that it smells like it. 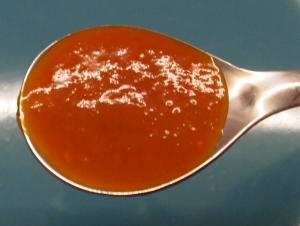 The scent wafting up as I fill my spoon is definitely fruity but it’s not the smooth, bright, passion-fruit aroma that I remember. It’s a fragrant, peppery one that could only come from a superhot red chilli. With just a touch of mango in the tail.

It smells pleasant, for sure, but even that aroma implies pain. It’s far from subtle about what’s in store.

And indeed, it tastes much like it smells: Sweet and fruity, with a body that’s largely mango and apricot, yet carries powerful red chilli overtones that soon turn the sauce a tad sour. Which obviously signals the beginning of its intense, stinging burn.

Now, much as it kicks in close to instantaneously and comes out swinging, the initial strength of this sauce is, if you know what you’re in for and are as used to crazy hot as I am, pretty bearable. Only about a seven on my scale.

By the time that this one finally begins to die down (and boy does that take a long time) it’s hit just about everywhere and topped every other reaper, scorpion, jigsaw, dragon’s breath or BTR sauce that I’ve ever tasted. The only things that surpass it in sheer intensity are extracts, Hot-Headz’ 🔥📽️reaper and scorpion purée📽️🔥 and Hot Ones’     📽️The Last Dab📽️. The last of which I’m still not sure doesn’t contain Smokin’ Ed’s patented cold-pressed chilli oils.

Plus, most of those don’t have nearly the stinging heat that Critical Mass has.

So, with all of that in mind, it’s definitely a new upper limit to my chilli scale but what’s it going to be? Well, it’s not that far removed from what’s come before, so I’d like to give it a ten point five but I feel like that could set a dangerous precedent. An expectation of unreasonable precision, even after we reach into double figures.

I’m no machine. I have my limits and, as sauces get hotter and hotter, my ability to distinguish small heat differences gets worse. I will only ever feel confident in ratings of two significant figures, so I’m calling today’s sauce an

Just know that, should anything hotter come along, I will be considering Critical Mass the bottom of that number.

An incredibly potent chilli product, yes, but one that’s still usable. For those who can take its killer chilli kick, it’s going to make a tasty dip for chicken, prawns and halloumi or go ever so well with them in a wrap. But, for those who just want a few drops to spice up a bolognese, curry, tagine or moroccan veg dish, it’ll do that nicely, too.

Its smooth, fruit-pulp base makes for a slow and controlled, yet rather easy pour, with a drop size significantly smaller than most record-level sauces.

While things like Dave’s Insanity provide more than enough heat with two drops, that’s because those two drops make up most of a teaspoon full, while this sauce lets me use five smaller ones for a similar intensity. Critical Mass provides the same ability to amp up my meal with more control and a better, bolder flavour. Just be aware that it can take a moment to hit you, in a dish.

As a pour on or dipping sauce, though, if you really are wild enough to use it that way, its gentle chilli shreds add a welcome extra texture amidst that fruity smoothness.

I like this sauce. It doesn’t taste or feel like its previous version but it has a good flavour and a fire that’s simultaneously everything that I both hoped for and dreaded. I won’t be using it fast but I will be using it and I will enjoy every last drop.

It’s not going to be for the average person but, if you’re as crazy as me and you want the hottest natural sauce around, or even just something at the upper end with a flavour that’s not exclusively pepper, the new Critical Mass is well worth a taste.

The only negative to today’s product, for me, is that I now have to rewrite every mention of my scale.

4 thoughts on “The Eleventh Hour”