So twenty-nineteen is on the way out, dear readers, and today is all that remains of it. But I do have one last sauce to show you, before the year is done.

It’s a special one, too. The very first to use Tesco’s latest attempt at the world record: The Armageddon pepper. 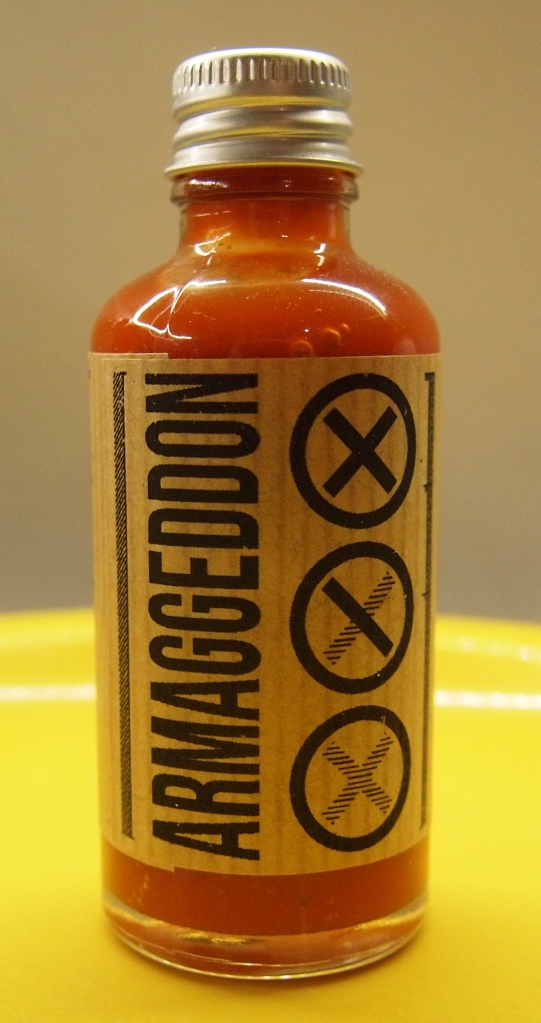 Upon release, this superhot was actually claimed to be milder than the reaper but, as most professional growers will tell you, later crops average hotter chillies. Tesco and their grower, Love My Chillies, were expecting it to make up the difference towards the end of twenty-nineteen’s growing season, though I’ve seen no word on whether or not it really did.

So I don’t know if this is now the hottest pepper in the world but I do know what today’s bottle says. It says that this is Brighton Hot Stuff‘s hottest sauce, made with habaneros, reapers, moruga scorpions, ghosts and the armageddon from which it gets its name. A huge range of red chillies, from hot to world record level and possibly even beyond.

Let’s take a closer look at it.

Today’s sauce comes in the same label that we saw on the company’s other sauces, only smaller. Lined brown paper with no colours, besides black, and no indication of the contents, outside of its text.

It’s not a fancy design, so I won’t dwell on it, but it comes across as surprisingly sophisticated, for something so basic.

And, speaking of surprises, take a look at the contents:

It may not be the thickest of hot sauces but it’s also far from the borderline watery consistency of Brighton Hot Stuff’s others. As though, despite being strained, there’s a lot more actual pepper in this one.

I’m excited to try it!

When I do, though, the taste is still quite vinegar forward. That tart, yet almost oaky, cider vinegar flavour is the first thing to come through, for me, despite the strong red chillies underneath. Then, as that begins to fade away and the pepper blend becomes more prominent, it suddenly changes to citrus.

That’s curious, since there isn’t any in the ingredients list, but perhaps its the lactic acid of fermented chillies. Chillies that add a mellow, yet spiky, red pepper undertone to every step of the experience and really come into their own once that lemon-like note dies down.

They’re hot as hell, with a

that really ravages the roof of my mouth and hits as hard as any pure reaper or scorpion sauce. An impressive feat for something that’s mostly vinegar and habanero.

The armageddons in here may well live up to their promise – And, if not, they sure come close – but they can’t do what the jigsaw did and push a pepper blend beyond what I’ve felt from the current record holder. I don’t see them taking the crown, whether they rate hotter than the reaper or not.

And I also don’t get much of a sense of their taste from this sauce. There are too many other pepper flavours in the mix, hiding them between a blend of mellow supers and peppery, fragrant, red habs.

If you’re looking to taste a brand new chilli, maybe wait until the second armageddon sauce. But, if you only want to feel it, Brighton Hot Stuff have you covered. Their sauce hits hard, takes no prisoners and definitely goes well over pizza. Or any other cheese and/or tomato dish.

It’s far more enjoyable, in the flavour department, than my first ten-level product. It just doesn’t clearly showcase its namesake chilli. Which is a shame, yet also far from unexpected, with an ingredients list like this:

So, in the end, I’d recommend it for those who seek a natural record. Just not for the freaks, like me, who put the flavour of new peppers first, even at such wild heats.