Hey there everyone, it’s tuesday again and time for a little more in the way of hot stuff. Hot stuff that I picked up down at the Brighton Fiery Food Fest.

So what more apt name could today’s company have than “Brighton Hot Stuff”?

Now, personally, I do view it as a little uncreative but anything that these guys lacked in inspired naming was more than made up for by the sheer personality and passion that they had on-stall. They were one of the most engaging groups that I’ve ever come across at a festival and, even after the official closing time, there were non-stop crowds around them.

So, do their products live up to the hype? I’m going to take a look at three of them and find out.

To start with, I want to jump right into a look at the ingredients for their second mildest sauce. Because, unlike their Chipotle, this “Jalapeño” one doesn’t just contain its namesake pepper. It contains:

And, in any other product, the addition of olives and a kaffir lime infusion would be something that I’d be pretty eager to talk about. Just not here. This item has a far more pressing point of interest in its second pepper.

I’ve talked about padrons many times before and you aught to know, by now, how much I love them. Yet I’ve never seen them used in any product, until now.

The people behind Brighton Hot Stuff take my favourite spanish peppers and grill them over a barbecue, in order to get a good char without the oil. It’s not quite the cooking method that I’m used to but I’m super excited to see what they do to a green sauce. So let’s dig in!

It’s a rather liquid sauce, guys, I get it. Adding a dropper cap makes sense but did you have to go for one quite this absurdly small? I really want to taste your handiwork on my food but there’s only so much shaking that I’m prepared to do.

I’m popping it off and, despite the ease of over-pouring that ensues, I’d urge my readers to do the same. It’s just not practical to leave it. 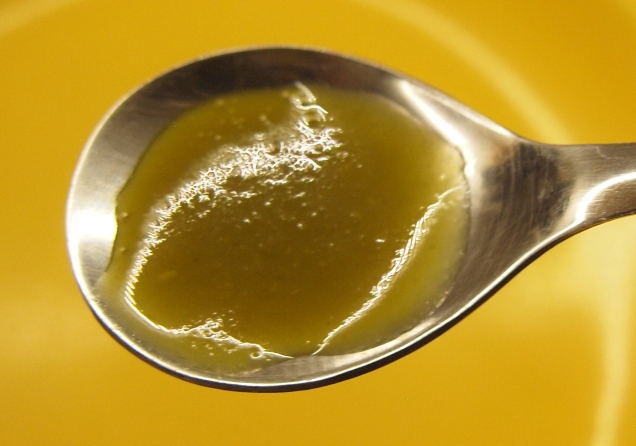 The “Jalapeño” sauce is smooth, fine-grained and thin, with only a low

to it, but its flavour is far from weak.

It has the same herb-free, jalapeño-forward quality to it as the Chilli Alchemist’s Phillosopher’s Dew but it’s far from the light, smooth, asian zinginess of that particular product.

Instead, Brighton Hot Stuff’s concoction is darker, richer, more full-bodied and carries an earthier tang from its blend of olives and cider vinegar. I don’t see it going on fish in the same way as the Dew but it has great potential on any grilled cheese or salad that can hold its own against that bold, green taste and I absolutely love it on my stir fry – Noodles or rice.

Add it to eggs, use its tang to enhance pizza or simply throw it over pork to contrast the more umami-laden taste of the meat, this one’s a real goodie, even if I do find its floral lime leaf a tad subtle. And, yes, it’ll probably liven up mexican food just as well.

I do find the packaging a little lack-lustre, both in terms of ease of use (see my dropper rant above) and in terms of its boring brown paper coating, but the sauce, itself, is stunning and I have high hopes going into number two.

Once again, their “Hop Sauce” is far from the most original of names but it’s a far more original sauce than that name might imply.

I used the exact same play on “hot sauce” when describing Hop, Burns & Black’s limited edition, earlier in the year, but the two have only salt in common. They don’t even use the same hops.

While Hop Burns’ Hoptimo used a fairly standard strain of hops, somewhat reminiscent of what a lazy, student filled park might smell like, as part of a herb base, Brighton Hot Stuff have favoured the citra strain used in most modern IPAs. A strain that I know for its part in Electric Bear’s Werrrd beer.

That beer’s yuzu-like citrus notes were a thing of beauty in Gingerbeard’s Piccalilli and, once I’ve popped the dropper cap out of BHS’ second bottle, they’re just as gorgeous here.

It’s an even thinner, slightly less grainy sauce than their last with a good bit more burn, hitting me with a decent

that definitely qualifies as “hot”.

Yet, once again, it’s the taste that floors me, not the chilli kick, and this time it’s real fruity. A blend of mango, pineapple and grapefruit that, along with the hops, provides an near-identical flavour to modern, fruity craft beers. Only, without the cloying bitterness that comes from removing all the sugars and with a pleasant, subtle overtone of fruity and just a tiny bit floral, red habanero.

Sweet and sour dishes are the first place that I would think to use this but chicken, white fish, orange duck and a less meaty pizza could all, also, benefit from its use.

Plus, why not try it out on some japanese tempura or in a teriyaki salmon glaze? Its warming citrus isn’t exactly yuzu but it’s also not that far from it, so there’s a lot of potential in eastern dishes that I’m probably only just touching upon.

Here’s what makes it so delicious:

Though, honestly, the agar’s not doing anything for the flavour. It’s simply a natural way of thickening it a tiny bit and preventing sauce separation.

But, try as it might, there’s only so much separation that agar can prevent and larger chunks will still sink the the bottom. So what do Brighton Hot Stuff do about those? They sieve them out, of course.

Despite their bold taste, a whole load of flavour-filled sediment is actually being removed from each sauce and would simply be thrown away, if it weren’t for the company’s third product.

These nuts, which I was given free because the owners liked me, are roasted and coated in the dry remnants of each sauce – In this case, their szechuan one. They’re not available on the company’s website but are sold in several bars across brighton and well worth a try.

The flavour that I have isn’t particularly hot, despite its sauce being on par with their fruity Hop Sauce, but it has a really nuanced, earthy taste to it from its chinese chillies, ginger, garlic, spring onion and toasted szechuan peppercorns. All of which work really well with the equally toasty nuts that they’re on.

They’re good as is but, trust me, throwing a handful into a stir fry after cooking is even better. Just don’t expect their barely

to do much for the dish. Taste is the focus here, as with all of Brighton Hot Stuff’s products, and, for that, I’d thoroughly recommend the company.

I have a couple more things from them that deserve a solo feature but, until then, I’m just going to leave you with the ingredients for the Roasted Szechuan Peanuts and a big smile.

“Suitable for herbivores”, like all of their nuts and main range.

Between their creative, high quality sauces, their resourcefulness and their infectious enthusiasm, I think that Brighton Hot Stuff are going to go far and I can’t wait to see more from them. Their sauces are a tad vinegar forward but, if that’s not an issue for you, they’re also some of the very best on the market.

10 thoughts on “Heat on the Beach”