It’s that time of year again, where we remember the saint of calm seas and celebrate the night when witches roam free but it’s surprisingly hard to find a UK-made, witch themed sauce with which to do so. So, instead, we’re looking at the sorceress’ traditional sidekick, the familiar Flying Monkey. As produced by Farraday’s “Tasty” brand.

How tasty it actually is, however, is something that remains to be seen, since I’m sure that every producer thinks the best of their own creations. And, also, I’m a little bit wary of the words “Carolina Reaper Tame Chilli Sauce”.

I’ve shown off some comparatively mild Reaper products, like Encona’s hottest sauce or the Jalapeño Creaper from Devon Chilli Man, but nothing that I would ever truly call “tame”. And I doubt that that’s going to change today.

Before I check out its flavour and fire, though, I’d like to quickly talk about the label. About the tiny company name rendered against a metallic gold banner so that it still stands out. About the red tag line between the white name and description that almost fades into the maroon background to reduce clutter. About the black outline that makes that name pop. And about the two-tone monkey for its logo.

It’s a very busy design but each individual element is so simple that it never overcomplicates the whole. It says everything that it needs to and even manages to squeeze in its fart joke in a subtle manner, using the monkey’s rocket propulsion, where other companies would have been far too blatant.

Perhaps it could say “reaper” in a more visual manner but, honestly, I rather like this crazy design.

And it matches the sauce inside. A dark, deep, reddish concoction strewn with herb fragments that appear almost black. 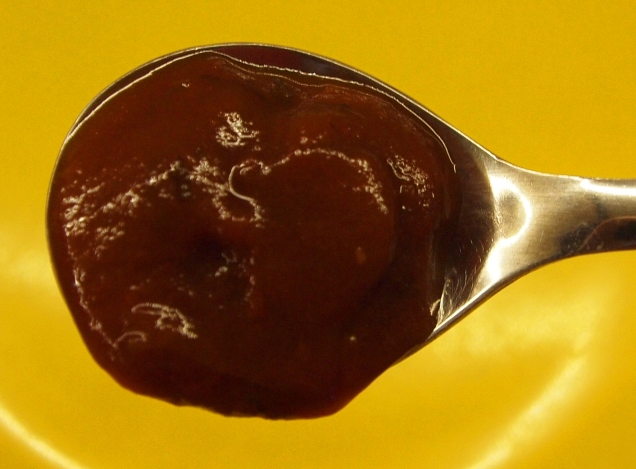 It’s a thick one, with an aroma both of tomato purée and of a worcestershire sauce that it very much does not contain. A strange savoury richness that could, perhaps, be from thoroughly fried onions. Not that I can say for sure.

What I can be sure on, however, is the flavour.

It’s rich, savoury, umami-laden tomato of a highly concentrated nature. Not fresh but puréed, roasted or otherwise cooked until the taste has changed completely, made fruity only by a small hint of mango.

Perhaps some roasted red pepper enriches it further and perhaps browned garlic adds an earthy undertone. It’s definitely a more rounded and full-bodied flavour than just tomato purée but it’s definitely that kind of tomato flavour that I taste at first. Before the oregano and coriander take hold.

Again, though, these are thoroughly cooked and broken down herbs but they’re good quality ones. Ones that have lost their fresher, greener elements in the cooking process but still have a strong presence that suggests that they’ve never been dried.

And then, in comes the reaper. The sharp, harsh heat that we saw in Doctor Burnorium’s sauce which seems to go with roasted peppers, suggesting that the chillies have received a similar treatment to the other ingredients.

It’s a little bitter, tearing away the mango’s slight sweetness, and it comes with a blazing

that, after eventually dying down somewhat, I find still warms my stomach and tingles the sides of my mouth.

For something claiming to be a tame chilli sauce, this one is freakin’ intense!

I don’t hate it, though. It’s reminiscent of the Death at the Crimson Altar, only more usable, since it’s milder and lacks the upfront liquorice. It’s still a full-flavoured, rich, red chilli sauce with a hell of a kick.

Farraday’s Flying Monkey is going to go well over eggs, burgers or pizza, under the cheese for a crazy cheese on toast and into a shakshuka, a deep, red madras or a bolognese sauce, to name just a few uses. The company’s three out of five rating seems a tad unrealistic but I’ll still be using their product a lot and hey, maybe it’ll even go well on steak like they say.

Maybe I’ll find out but, for now, that’s enough of what it goes into and onto. Here’s what goes into it: