Hey folks, it feels like I’m doing this almost every month now but here’s another two product review. A comparison, so much as there can be one, between two very different takes on a thai-style sauce.

One is a long awaited item from Devon Chilli Man, seen on my twitter midway through last year, and the other is one of the many I got from Grim Reaper Foods. Yet, despite being based on a thai sweet chilli, it’s not the last of the freebies from their thai-themed box.

No, that’ll have to wait just a little longer because Devon Chilli Man is the one with a green jalapeño sauce today. A green thai sweet chilli that he calls the Jalapeño Creaper, not because he can’t spell but because it also contains carolina reaper.

While the Grim Reaper shows us his Alchemy, another highly unusual sweet chilli sauce made using the lemon drop or aji limon chilli. A citrusy pepper that turns the sauce to gold, just like the alchemist’s dream.

Both are going to be at least a little stronger than your average thai sweet sauce but their unorthodox chilli choices also bring a unique flavour and appearance to the table.

Grim Reaper Foods do an excellent job of reflecting the dark yellow/golden brown colour of their sauce in its packaging, too, and even blend it into the sauce’s theme.

They may not be The Chilli Alchemist but they’ve sure leant hard into the alchemy theme here. And with good reason.

As I mentioned back in my Magnum Opus review, the ultimate goal of alchemists wasn’t always to create gold but it was so often such that “gold” and “magnum opus” became interchangeable. So its no surprise to see that referenced here, where Grim Reaper Foods have taken a common style of red sauce and turned it golden.

Alchemy, the early blend of science and magic that revolved around the transformation of metals, is a perfect fit for this concoction and the spherical boiling flask that the grim reaper in their art holds neatly ties together both sides of the field. It’s both a bubbling vial of miscellaneous potion and a classic example of scientific equipment, representing the golden sauce inside the bottle with its own metallic contents.

The fumes that rise from the liquid then blend into the golden flames that top the label and form a backdrop for the sauce’s black name, while a more standard, orange-coloured fire keeps the grim reaper from disappearing into its black background.

It’s simple and it’s elegant. It stands out, it tells us about the sauce and it even tells us a story. It panders to my own interests but I’m sure even those who don’t share them can appreciate the artistry of this bottle. I am thoroughly impressed.

Unlike with today’s other item.

Devon Chilli Man has put far less effort into customising his label to match the sauce and he hasn’t gone with a fun, old school design like the face of his Death at the Crimson Altar. All he’s done is scale up his own logo to fill the frame.

And, while his logo is of a chilli, that’s all it tells us about the sauce. It’s not green like the jalapeño or round like the carolina reaper. It’s a long and tapered, red variety. One given the appearance of a ghost pepper by the texturing of its muscles.

Muscles that have been added as part of a superhero design, seen in its black cape and the way that its stem has become a green cowl with an eye mask over it.

It’s not a bad logo, by any means, but just that, glowing white to stand out on a black background, does very little to explain the product.

In fact, if anything, the near black bottle it comes in could be considered misleading. It certainly makes the sauce within seem darker than it really is and that could easily imply a dark, soyish or umami-heavy flavour.

On my spoon, however, it’s clear that the Jalapeño Creaper is far lighter than it first seemed and even a little yellowy from its cider vinegar content. 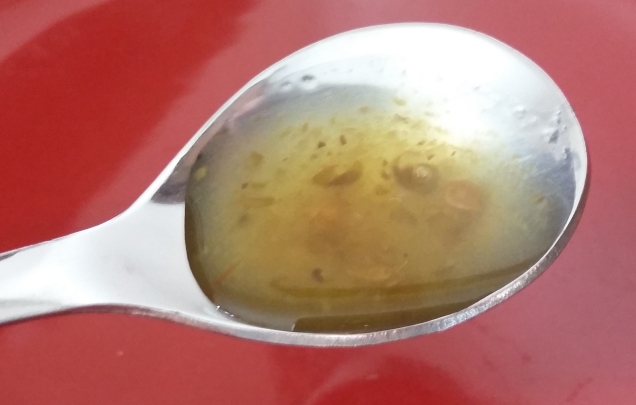 And it has some obvious shreds of green chilli and seeds inside but it’s otherwise pretty clear.

It’s not a dark sauce at all and, with nothing above a low.

to it, it’s not like there’s any need to make the product look evil.

Can you spot what’s up with it? No? Well I’ll save you the hassle of doing the maths then. It’s out of order.

There’s simply no way that jalapeños could be the biggest ingredient at only 8.33% and the numbers still add up to a hundred. It’s not possible.

And sure, so far as I’m aware, there’s not any legal requirement to list ingredients in order but it’s such a commonly accepted convention that it reflects poorly on a company when they shirk it without reason.

It’s just one extra little niggle, really, but it’s yet another contributing factor to an overall remarkably uninformative design. The bottle looks good, don’t get me wrong, but it needs to do more.

When you’re combining the world record pepper with one of the mildest chillies people know by name, you really need to say a little more about the end result.

I’ll be filling in for Devon Chilli Man on that front in a moment but, before we judge the flavour of his sauce, we should probably get a good look at today’s other contender, the Alchemy from Grim Reaper Foods:

This one’s a lot less of a surprise, since its clear glass bottle doesn’t hide the sauce inside, but it’s still nice to get a close up of that gorgeous amber. And we can learn a few other things about the product, too.

It’s sticky, almost syrupy, yet liquid enough to flow with ease. It holds shreds of the chilli that are as golden as itself but sink gradually to hide behind the label. And its aroma, while faint, is that of a slightly tangy alcohol.

From its ingredients list, we can see exactly why:

It’s a simple sauce in which the high sugar content forms a syrup that masks the chilli’s own scent but cannot hide that of its more volatile cognac. A beverage which, in turn, picks up a little tang from the particularly fruity vinegar that the company have used.

When I bring it to my lips, its spice isn’t anything crazy but I didn’t expect it to be. Its chilli is a little milder than the average habanero and its held back by the sauce’s sweetness. It provides a pleasant high

on the lower end of what I’d call hot.

A sharp, refreshing kind of burn which strikes first in the very front of my mouth, before moving to the upper back. A heat profile that feels right at home with the lemon-like flavour of its chilli.

A flavour darkened just a touch by the fruity apple-based vinegar in the sauce and turned into something more of a marmalade by the addition of sugar.

It doesn’t have the smooth bitterness of actual lemon peel like the actual marmalades that I tried last month but it does boast a wonderful and surprisingly rich golden shred meets sweetened cider vinegar kind of taste. One in which it’s clear that the unusual citrus-flavoured pepper is really pulling its weight.

The cognac, I’ve found, is a touch more obvious in some batches than in others but it blends wonderfully with that main flavour, adding its own oaky, earthy and maybe slightly honeyed notes to the whole.

It’s a very unique sauce but one that’s surprisingly easy to describe the flavour of and one that works absolutely beautifully. I’ll explain what on in a moment, though, because the Jalapeño Creaper’s flavour deserves my attention, too.

It may be the clear loser in looks, today, but both of these sauces are winners when it comes to flavour. And they’re completely different, aside from their general consistency and sweetness.

Yes, the Creaper is another sweet chilli sauce that’s mainly sugar and yes, it’s sticky and almost syrupy, with a partially mixed set of liquid and solid components. Both of them are going to need a shake before use to make sure that they’re properly mixed but the Creaper’s got a very different chilli behind it.

Instead of yellow and citrusy, the main pepper in Devon Chilli Man’s sauce is green. Technically under-ripe but not sharp or bitter in any way. Nor is it exactly grassy here but it definitely tastes its colour, if that makes sense.

You can tell that this is a green chilli sauce from the somewhat vegetably flavour that the jalapeño brings and also from how the chilli shreds are noticeably less sweet than the rest.

Yet you also get some tiny bursts of fruitiness from the carolina reaper and it’s clear from the way its fire hits you that it’s not a single pepper sauce. It’s a blend of two peppers with a similarly two stage burn.

In fact, it starts out as a two out of ten. A touch above the heat of any normal jalapeño sauce and coming in almost instantaneously. It sits on the tip of tip tongue for a moment but then it grows. And, as it does so, it shoots down the left side.

Even if you eat it on the right.

This trait is quite distinct among chillies. Not one that always comes across in reaper products but one that is almost unique to that pepper. And one that heralds the onset of the sauce’s second peak.

As the carolina reaper kicks in, I begin to worry that I might have eaten too much. It’s already blown past the heat of the Alchemy by the time that I’ve realised what’s going on and it shows no signs of stopping.

Yet, mere moments later, it does stop. The Jalapeño Creaper never makes it to a four.

This sauce ramped up to the middle of what I’d call “hot” in record time but it didn’t carry on like I expected. It never went to “extra”. It simply faded away, far slower than it came in, to a pleasant warmth.

It’s an ejoyable feeling and the two different peaks make for a burn rather unlike most others but what’s really selling me on Devon Chilli Man’s product is the green sweet chilli flavour.

It’s simple but it’s delicious and it’ll definitely go well with just about everything that you’d expect a regular thai sweet chilli to. Which, for me, would be primarliy noodles, chicken and enchiladas. Things that today’s other sauce, the Alchemy, would do equally well.

In fact, despite having a very different taste to them, I’d use both in very similar ways and both also have a great consistency for pouring over various meats as a glaze. Or to act as a dipping sauce for spring rolls and prawn balls.

Plus, speaking of seafood, both lemon and sweet green pepper are delightful over freshly cooked white fish.

I could go on but I think the point is clear. Both of these are highly usable, hot sauces and I could easily recommend either of them. I would definitely suggest getting both but, should you really need to grab just one, I think it’s the Grim Reaper’s Alchemy that does it for me this time.

6 thoughts on “Not So Thai”