I hope you’re all enjoying the start of your weekend. I know I am.

Why? Because I’m particularly happy with this month’s recipe.

It’s a common, highly popular, streetfood item, spiced up in my own signature style and, while it was never my intention for it to be such, it’s come out as another part-italian fusion food.

We’re talking scotch bonnet mozzarella sticks, using many of the same spices as a caribbean jerk.

They’re tasty, they’re savoury and they’re more representative of jamaican food than most of my past work has been. What’s not to love?

Well, perhaps the preparation because, unless you can find somewhere that sells powdered or flaked scotch bonnets, you’re going to have to make your own.

Now, I do own a proper dehydrator but I can’t just assume that you do, so we’re going to do this the hard way.

Take 5 scotch bonnets and butterfly them open (that’s fancy talk for cutting them in half), then bake them at 120°c with the door open for five hours.

That’s technically slow roasting them but we’re doing it so low and slow that they barely cook at all and only the tiniest amount of heat is vapourised. It may still be worth opening a window if you’re on the more sensitive side, though.

To show just how little the chillies are cooking, here’s how mine came out:

Still as red as ever, just less wet.

But they’re not much use to us simply halved, we’ll need them flaked or ground. With the stalks removed first, of course.

For this, any electric coffee grinder will do but be warned: The heat and flavour will linger and affect anything else you put through it. If you don’t want spiced coffee, I would strongly recommend not just washing it but also running uncooked rice through to absorb the pepper residue. Or having a completely separate grinder for your chilli.

When that’s done, you will also need:

1 slice stale white bread (if needed, a few hours on a radiator will stale it for you)

A dash of salt

A dash of black pepper

Take those spices and mix them them with the scotch bonnet powder/flakes to form your chilli seasoning. If you’re using pre-dried bonnets, you want about three level tablespoons worth but you can always substitute 1 or two of those for milder peppers if you want less heat. Fruity red jalapeños or the long, thin bell-likes you see in supermarkets would be my choice but you could use regular red bells.

I’d just judge you for it because they’re not great tasting peppers.

But, my taste in spiceless peppers aside, my recipe will produce a serious

that reaches the very top of the number and borders on a four. Looking into milder peppers to cut it might not be a bad idea if you’re not used to very (but not quite super) hot.

Or you could leave the spice mix out entirely and just use a favourite sauce post-production, like I’ll be doing on my youtube channel in the near future.

For this post, however, I’m making it with the bonnets, the full bonnets and no pepper but the bonnets. I want that pure, dry, savoury, fruity flavour with my cheese.

The nutmeg and allspice might generally be considered sweet spices but the thyme is most definitely savoury and there’s just enough of a bitter hint here to neutralise any and all of those sweet notes.

So, now that it’s done, let’s prepare the body of this appetiser.

Open and drain your mozzarella, then cut it into roughly centimetre thick sticks.

Sprinkle the spice mix over and roll the cheese to coat it. Like so: 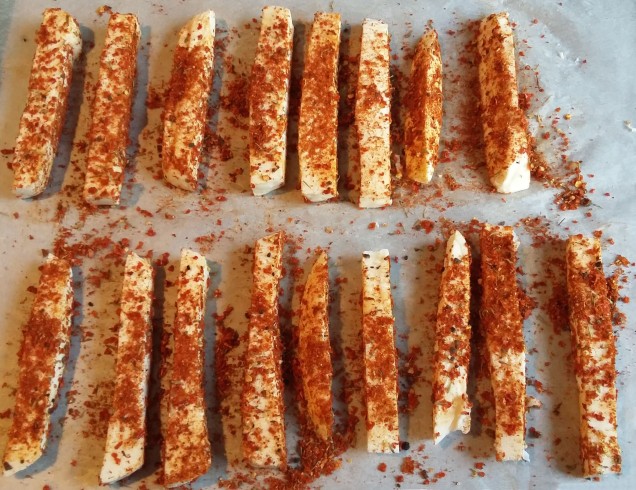 Then gently beat your pair of eggs into a small bowl and line up similar bowls of flour and bread crumbs.

If you’re bread’s stale enough, any blender will crumb it nice and fine but some finesse with the hand held sort might be needed if it’s fresher. Either way, though, it’s the size of the pieces that matters, not the quality of the bread. That simply alters the amount of effort required.

When your three bowls are ready, roll the sticks in your flower to seal in the spice, then into the eggs and finally the bread.

If you want to go fancy and get a full bread coat on, you can refrigerate the cheese for half an hour after the first bread roll, allowing a second round of eggs and crumbs to go on. You’ll need an extra slice for that, though, and probably a third egg.

Me? I’m fine with just one layer.

Once all your sticks are coated, place them back onto your chopping board freeze for at least an hour. Preferably overnight.

This helps keep the coating on, cools the cheese enough to not melt instantly and gives the spices time to infuse.

Yet there’s one more step before they’re actually any good to eat and that’s the frying.

Heat to simmering a pan of vegetable oil, filled to at least half the height of your biggest stick, and start chucking them in. I like to use a long spatula for this because they will spit. It’s an inevitable consequence of the temperature difference.

Cook each one for a couple of minutes before flipping them to get a nice golden brown appearance and good level of crispiness, then brown up the other side to match.

When they’re done, place them onto a wide plate covered in at least two layers kitchen roll, using another piece to dab off any excess oil that remains.

Serve warm and consider a mild, sweet sauce or jam to compliment these cheese sticks that are anything but. Cranberry would be traditional but raspberry jam or a thai style sauce works just as well, I find, and I doubt that a more standard chilli jam would go amiss.

3 thoughts on “Something Cheesy”