Hey everyone, it’s october. And you know what’s special about october?

It’s the month with halloween in it.

And yes, I know, halloween’s still almost a month away but what use is a holiday product review if it goes up on the holiday? I’m doing this early so that you have time to track down the items involved, should you feel the need.

Or maybe just to warn you what’s in store if you knock on my door this year. 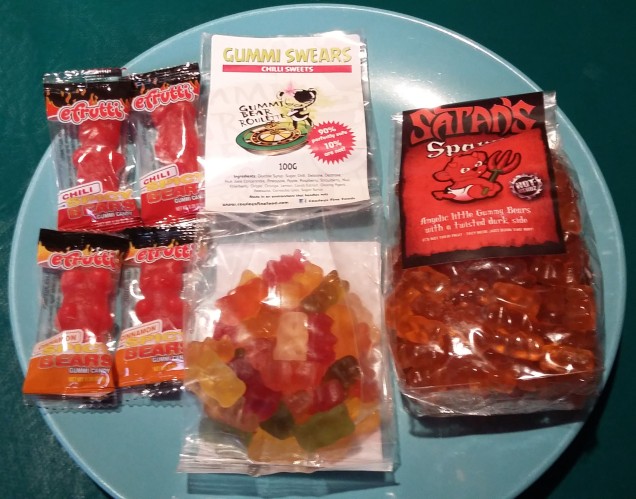 Three different brands and four or five different products, for a full comparison of every sort I’ve seen.

First up, we have a couple from Efruitti, a german company that’s more widespread in america than the UK but seems to feature in nearly every import sweet shop. 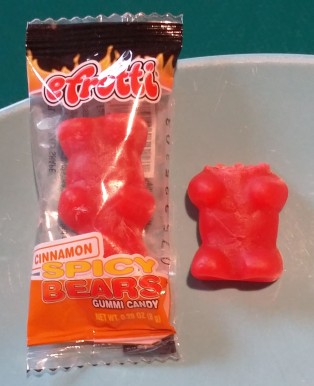 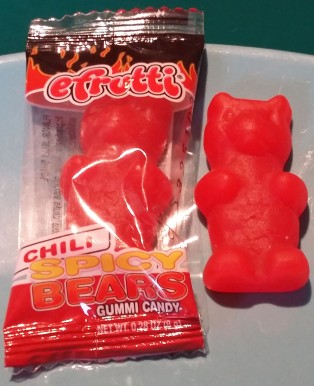 Unlike the other brands on show today, Efruitti don’t use gelatin in their gummy bears. They use palm wax and oil to set their sweets without any animal content. These bears are the only spicy ones I’ve found that are both vegetarian and vegan.

And, also unique to this brand, they come in chilli, cinnamon and ginger flavours, though I sadly can’t show you the last of those.

The ones I can show you, however, look pretty great in their black and red or black, red and orange packaging, flames coming off the chubbily lettered company name and a clear centre to highlight the bear inside.

Yet there is only that one bear inside. But it’s a massive red bear that dwarfs most others even after I’ve beheaded it. 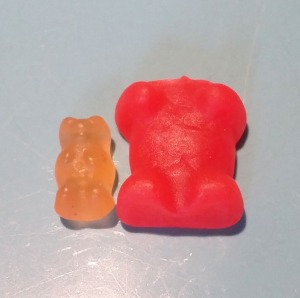 But, ignoring their abnormal sizing, there is an actual problem I have with these bears. Their flavour.

Their is no actual cinnamon or chilli in these. They’re flavoured with “artificial and nature identical” ingredients that produce a spiced wood not too unlike the real thing for the cinnamon version but get a bit weirder when they attempt to take on chilli.

The chilli one, to me at least, begins by tasting of some miscellaneous red fruit. Maybe cherry, maybe blackcurrant, maybe even strawberry but, whatever it is, it’s definitely not quite the real thing and it soon transitions into something else entirely. An ever so slightly savoury, not quite red jalapeño, not quite bell pepper flavour that’s clearly supposed to be chilli of some sort but doesn’t quite match any I know.

The chilli version had a surprising

but, as you might expect, the cinnamon was a little lower, striking me as more of a

And, of course, they both felt like the manufactured, full mouth flame of an extract because that’s what these contain. They simply contain a lot less of it than any of the more blatantly extract-based products we’ve seen.

Frankly, they’re alright (and so is the equally low 2/10 ginger version) but they certainly wouldn’t be my preferred option.

As a chilli connoisseur, I find them too fake and, compared to other gummy sweets, they’re a tad tough and un-springy.

My preferred chilli gummys would probably be these: 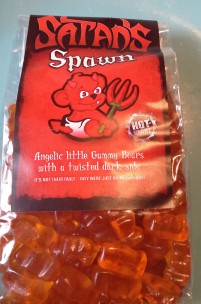 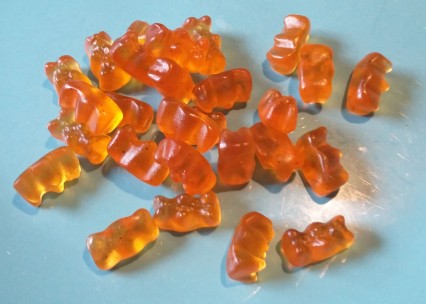 A bigger bag of smaller bears, labelled up in similar shades of red and black but this time featuring a nappy-wearing fusion of cub and devil to give the consumer a pretty good idea of what to expect. It even holds a chilli pitchfork.

And indeed, they are hot. We can even just about see the flakes of habanero on camera.

They are, however, practically invisible from a distance and, when mixed in with Haribo’s, you’d have to look very closely to tell these bears apart. 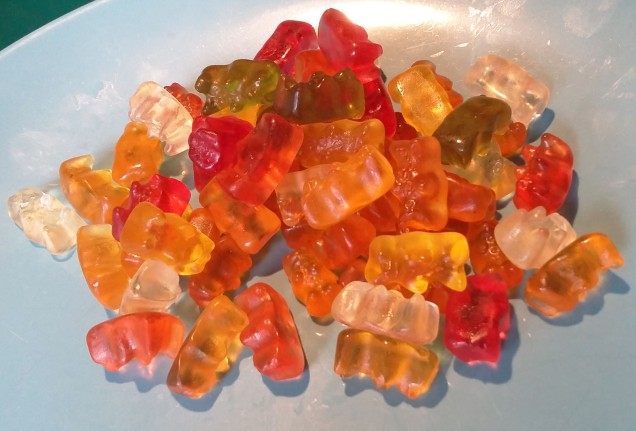 This is, of course, the recommended use for tricksters but, with the number of sites and stores that sell them, I’m sure there are many other stories and suggestions out there. In fact, I’ve heard a few myself.

But, while I will be giving away such a mix this year, I’ll also be giving trick or treaters my business card and I won’t being doing it to little kids.

I’m not that mean and I genuinely think that these sweets should be enjoyed. After all, they’re red habanero and apricot flavour, giving the unique and pleasant impression of something almost orange or pumpkin-like until the high

hits hard, about 30 seconds into the experience.

They’re definitely enough to shock people with and can seem very hot if you’ve never stepped into the world of supers but they’re also genuinely enjoyable if you appreciate strong chilli and don’t linger too long.

But then there’s Cowley’s Fine Foods.

Like I said before, I may have been mostly showing off the samples of their hot vegan range that I was sent but I did request a few extras from them too. The only chilli one of which was these: 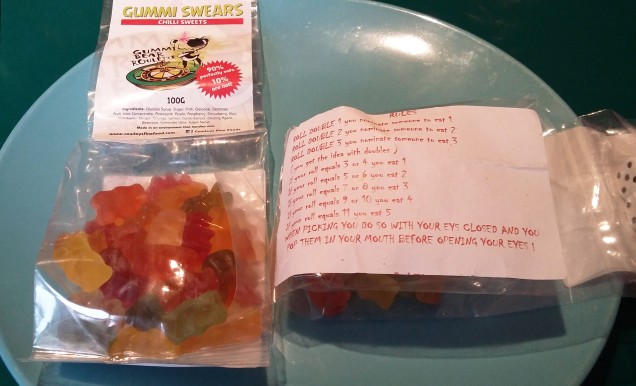 Now, I planned this gummy bear comparison post well in advance but it was still mere chance that I stumbled upon Cowley’s contribution. Due to their spelling and punny name, neither the word “gummy” not the word “bears” would take me to them.

But let’s be honest. The name may be bad for search engines but I’ll never forget it now that I’ve found it and it really is quite to the point. Sweets so hot you’ll shout expletives.

I wouldn’t change it.

Yes. But only ten percent of them.

As the packaging explains and it’s angry teddy on a roulette wheel image suggests, this is a gummy bear roulette pack. A pack that includes not just bears but also a pair of dice and a rules sheet.

Yet that sheet explicitly states that you must pick with your eyes closed. Which made me scrutinise every colour for differences and here’s what I found:

The light, orangey yellowy ones are twenty percent smaller than the rest and have the same little flecks in them as Satan’s Spawn.

They don’t taste the same or have quite the same colour but they’re still remarkably similar in all respects. Their size and shape are identical and these, too, reach a pretty powerful

in a very similar fashion.

If you want chilli gummy bears, though, you get a lot more with Hot-Headz. Yes, you have to buy the heatless bears to mix with but they aren’t exactly pricey or hard to find.

No, if you’re buying the Gummy Swears, you’re doing so for the flavours. The genuine and remarkably recognisable fruit flavours of pineapple, apple and kiwi, red berries (including elderberry) and lemon and orange.

These are a lot tastier than your average bears and so, if gourmet sweets are your thing, they will go down a treat. As would the jelly babies of the Gummy Swears range. Simply the same flavours in a different body, with a softer, squisher texture and no dice.

I did find, however, that I got a lot fewer hot ones with the jelly babies for some reason, to the point that mentioning their heat has been a very last minute adjustment.

Perhaps that’s a good thing, though, as it puts more focus on the real fruit flavours that I think are the product’s best bit.

So, in conclusion, my recommendations are as follows:

-Efruitti for those who want less intensity or don’t eat meat.

And, of course, even in the event that none of them appeal to you, I wish you a great halloween all the same!

3 thoughts on “Battle of the Bears”