Plus, unlike in previous years, twenty-twenty’s white day falls on a saturday. A recipe day.

So, this time around, I’m going to be a little self-indulgent. I’m going to combine three things that I adore – Chocolate, chilli and slow roasting – in order to make some simple yet delicious, ginger and naga-flavoured, salted, caramelised white chocolates. 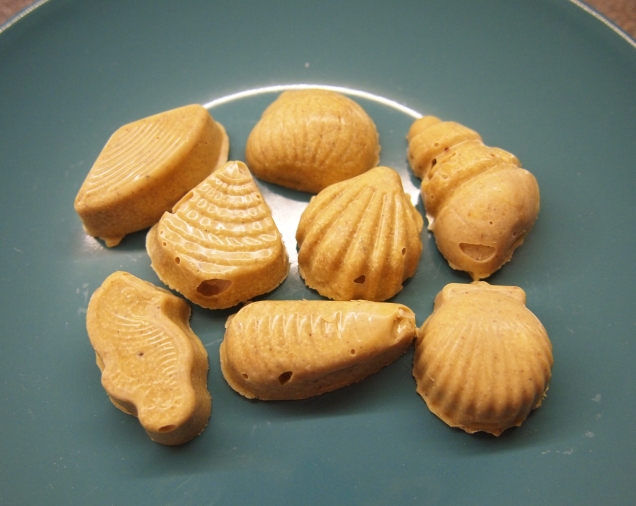 And I’m going to hope against hope that some of you feel like following suit. Since, despite the ease with which you can whip these rich, sweet, earthy, almost-nutty and entirely decadent treats up, simplicity does not equal speed.

Caramelisation doesn’t occur quickly and my chocolates do have a two hour cooking time. Their flavour is well worth that commitment, of course, but I could still see it putting a few people off.

You still here? Good. Then let’s talk a little bit about what my white day creation is. Because caramelised chocolate is not a common concept. Few people have heard of it and the name, alone, can be a tiny bit baffling.

It is, however, exactly what it sounds like: Chocolate cooked at a low temperature to break down its sugars, without drying out, in order to create all of the warm, golden flavours that you’d expect from regular caramel.

Yet, unlike regular caramel, those sugars are all wrapped up in cocoa butter. They don’t fully burn and pick up bitterness but they do, most certainly, become even more decadent when paired with that natural, plant-based, melt in the mouth fat.

They also pair just as well with salt as regular caramel does and work beautifully with any spice that can match their warmth – Hence the ginger. Yet they don’t take nearly as kindly to chiltepins.

Why? Because chiltepins don’t compliment that golden taste, they fight it. Their own savoury notes work with the natural bitterness of burnt sugar, to offset its sweetness, but that bitterness never forms when the sugars are part of a creamy white chocolate.

So, instead, I’m using just a touch of ghost pepper powder, in order to compliment the earthy ginger and provide a delayed, throaty kick.

Which, hopefully, explains what I’m doing today. Now I just need to tell you what I’m working with and how.

Here are the ingredients: 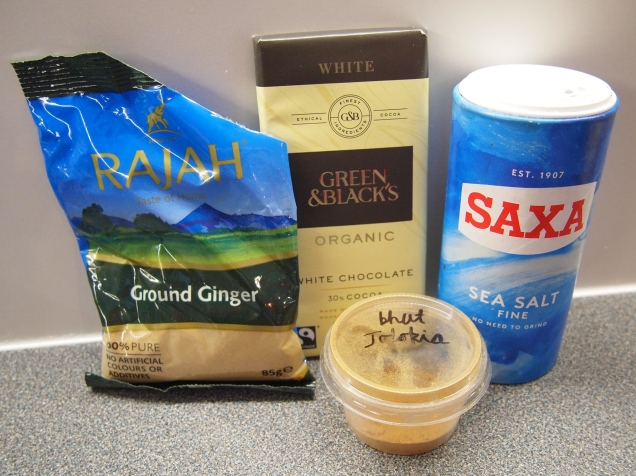 And that’s it. Just four ingredients and no complex procedures. I’m honestly amazed that more people don’t do this. Though it might have something to do with its need for good quality chocolate and people’s unwillingness to risk wasting it.

After all, the cocoa butter content is a big part of why this recipe works. Too little and the whole thing will dry out and burn, mid-way through the cooking process.

I don’t know exactly where that line is but, if my own experience is anything to go by, thirty percent looks to be cutting it close already. I wouldn’t suggest going much lower than the Green and Blacks that I used.

But enough of what won’t work. Let’s get on with what will.

To start with, line a cake tin or baking tray with tinfoil and break or cut your chocolate into chunks, like so: 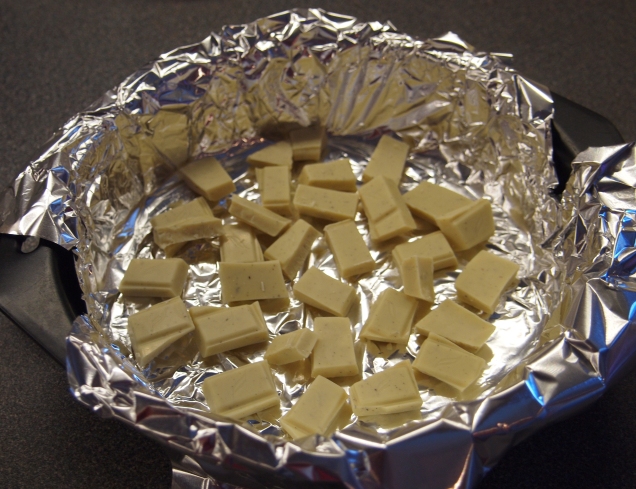 Making sure that they’re evenly spaced before popping the whole lot into a 120°c oven for ten minutes.

From there, stir your now-melted chocolate around, to cover the bottom of your pan or tray, and pop them back in for another ten. Before adding in all of the dry ingredients and stirring them through to form a thick paste.

And I know that I said to use an eighth of a teaspoon in my ingredients but I just want to show you how much ghost I actually used. Since, you know, precision is important when we’re working with such hot pepper powders. 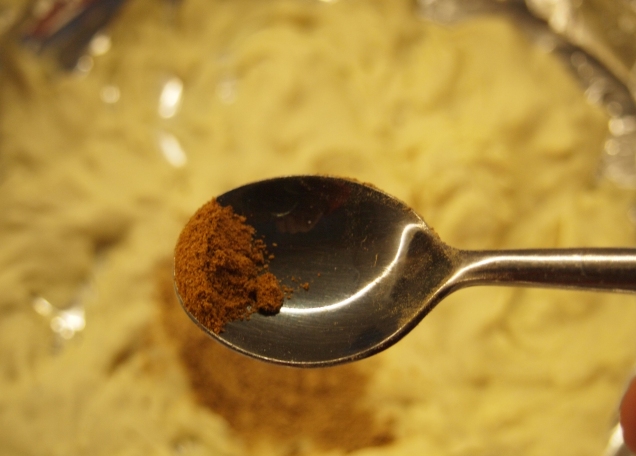 Once you’re happy that you’ve got an even paste, shove everything into the oven again and cook for until the full two hours is up. Another hour and forty minutes. All the while, making sure to give the mixture a stir and a flip every twenty to thirty, just to be sure that it’s caramelising evenly.

Then, finally, once all is said and done, take your container out of the oven, carefully fill as many chocolate moulds as you can with it and refrigerate for at least an hour. Or, if you actually know how to temper chocolate, do that. I’m no expert on the subject.

Either way, though, when you’re done, you should have something like this:

Delicious, caramel-coloured and flavoured chocolates with a hit of salt in the tail and a powerful

in the throat which reaches the very top of that number, yet also doesn’t make itself known until long after I’ve swallowed. The sheer creaminess, I suppose, holding it back until everything but the ghost pepper has left my mouth.

They’re delightful, as is. Highly decadent, thoroughly melt in the mouth and almost reminiscent of peanut butter in their toasted, earthy, creamy, sweet and salted flavour.

Yet they’re also amazing melted and spread over pancakes or dissolved into white hot chocolate and I have a crazy plan for cooking with them later on.

Until such time as I deliver on that idea, though, please enjoy them as is. They’re well worth the effort and an amazing way to celebrate white day.