In this week’s review post, I’m going to be taking a crack at some artisan harissa, from Burning Desire Foods and Carringtons, to see how it compares to the simpler, more traditional sort that I once stuffed peppers with.

It’s quite easy to tell which is going to be closer, though. The free sample that I got from Burning Desire uses the same blend of red bell peppers and serenades that I’ve used in my own harissa attempts, while Carringtons does away with anything so mild, in favour of a ghost, scorpion and reaper mix.

It’s pretty obvious that they’re going for heat over tradition but how will that same mellow pepper mix that we saw in 📽️ Mad Dog’s Gold Edition 📽️ impact the flavour of a harissa paste?

I can’t quite picture it but I’m certainly excited. For both of today’s products, since Burning Desire Foods have a long history of quality that we’ve seen many times on this site.

Now, Carringtons may not say what peppers they use on the label but the red silhouettes of generic chillies that form its border do look stunning against the solid black background. And the metallic silver of their “Flaming Chup” name both matches their chunky metal lid and really makes the product stand out.

Nothing about the jar says “Extreme”, besides the text, but it absolutely screams “Special” at the viewer and I could definitely see it selling on that alone.

We’ll find out whether it lives up to its looks in a little but but first, we’re going to have to set it aside to get a better look at Burning Desire’s product. Because most of its labelling is actually ontop:

Bright red and yellow text with peachy-coloured action lines that remind me of Wiltshire Chilli Farm. It, too, fails to visually indicate its peppers and, impactful as its patterning may be, it doesn’t really imply the deep, rich, red flavour of harissa, either.

Perhaps the company’s colour scheme is intended to evoke the extra fruit that they’ve used – Apricot, lemon and clementine – but it just doesn’t seem that fitting to me. Especially not once I’ve opened it up and seen the near-brown of the sauce within.

Not as thick as the harissa paste that I know but still relatively thick for a sauce, with small, soft chunks of red pepper and tiny black grains that imply that the ingredients have been charred. As well as the slight glitter of oil droplets, suggesting a smooth taste and mouth feel.

One that I definitely experience, when the sauce hits my tongue, along with a rapidly growing, peppery richness that bears the familiar flavours of cumin and caraway.

Jason has done a wonderful job of capturing that classic harissa taste but the fruit that sets his product apart is rather more subtle. In fact, it’s the oaky aged-apple in his cider vinegar that comes through the most, despite only adding a small amount of tang.

Combine that with the sauce’s base flavours and the subtle rose water in the tail, though, and this really is a next level harissa. Plus, the added acid will keep it fresh in the fridge for longer, assuming that you can bring yourself to leave it long enough to see a difference.

I am so very happy with what I’ve been sent for today’s review. I’ll definitely be making the most of it over white fish, rice and cous cous and, if there’s any left after using it on last weekend’s jollof, I’ll most certainly be giving Jason’s suggestion of adding it into soups and stews a go.

An acceptable medium that leaves a delightful glow in my throat but might be a tad too usable for the extreme heat seekers. Which is where Carringtons’ Flaming Chup comes in.

And the brighter, lighter, saltier smell released as I remove their chunky, silver lid instantly reinforces my initial impression – That this is going to be a very different tasting product.

At fifty-five percent chilli, though, I kind of expected it to be thicker. On my spoon, their texture seems to be almost identical, right down to the flecks of spices and the shine from the oil. 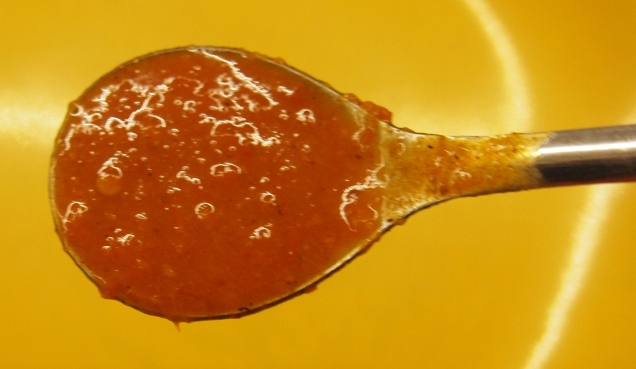 The only visual difference is that this one’s orange.

Intensity-wise, though, this one hits my tongue hard and only gets hotter on the way to my throat, until I’m panting and hiccuping from a strong

My full spoonful was probably a bad idea but hey, I wouldn’t be in this line of work if I was entirely sensible. And there are definitely worse places to be making my dumb decisions than here.

Unfortunately, though, this harissa doesn’t get much better when consumed in smaller quantities. Because, as much as I like the mellow pepper blend at its core, I don’t enjoy its floral notes or how those interweave themselves with the crazy amount of salt that I was smelling a moment ago.

If a chilli product is going to make me cough, I’d rather it be from its peppers than from the sheer salt content. This one feels like a dud but here’s what goes into it anyway:

While Burning Desire Foods’ vastly superior product was made from:

That one was truly delicious and I would recommend it for anyone who enjoys harissa, or even just roast peppers, in general.

It’s a good thing that I have that to fall back on, given the disappointment of Carringtons’ Flaming Chup.

One thought on “Harissa – Hot & Hotter”