This week I wanted to showcase a less extreme sauce. I wanted to but the allure of my favourite chocolate was just too strong.

You see, I’m not the biggest fan of dark chocolate. I enjoy chilli chocolate regardless but I’ve still always wished for a milk version. Of course, that never seemed possible when I was younger, the lactose present was just too cooling. But now, in the age of ghost pepper everything, Grim Reaper Foods have delivered: 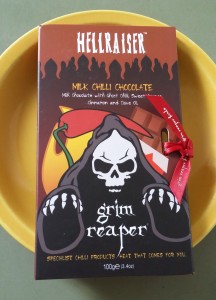 Instantly you can see their logo and the sort of melty-looking light brown at the top, the significance of which I’ll mention in a second. You also see the fancy red ribbon, which suggests that this is something special but it might take just a moment more to notice the rest amongst the slightly busy imagery.

That’s ok though as the shape of the packaging, combined with the air of fanciness from the aforementioned ribbon, make it quite apparent that this is a chocolate bar, even before you read the (quite visible from its colour) text on the front.

And, if it needed visual reinforcement, the stylised flame, chocolate bar and chilli scythe in the background all explain the product without words.

You might be wondering though, with all the effort they’ve gone to with their design work, is there anything on here that says “milk”? Well, there is and there isn’t, as it turns out.

There is no cartoony milk bottle or anything that might misrepresent the product as cooling but that melty-looking brown section behind the name doesn’t just imply a melt in the mouth experience. It also becomes black or cream coloured on their dark and white chocolates, respectively, so that you can instantly tell them apart on a shelf. And that’s something you want because Milk and white chilli chocolates are rather unusual.

By now, I’m sure you’re all tired of discussing the design elements though so let’s have one last look at the ribbon and move on.

Yep, they’ve even printed on their company name in silver. No corners cut here.

Now let’s get into it!

Upon removing the ribbon, we’re greeted with a quick explanation of their range and a rather plain looking chocolate bar. So plain, in fact, that you could easily trick your less spice tolerant friends with it but please don’t. That would be a total waste of something so lovely.

And besides, while the heat is pretty decent, it’s not something I’d call extreme. Or even hot. More the top end of medium or the low end of my scale’s

A pleasant burn that’s enough to stop the average hot food eater from scoffing the lot but not going to harm anyone’s enjoyment if they’re sensible with how they eat it.

Breaking into it, this chocolate has that satisfying snap that chocolatiers and connoisseurs seem to obsess over. It has a wonderful smooth, rich taste with the heat following through gradually. A perfect combination in my opinion but let’s talk about the flavour a little more.

If you’ve been reading the packaging as you’ve gone along, you’ll already know that the taste isn’t just that of a good quality milk chocolate. No, Grim Reaper Foods has used orange oil, cinnamon and clove oil to add spiced hints to it.

These are immediately obvious in the way the chocolate tastes, even if you haven’t read the box, but they don’t overpower the main flavour at all. Instead, they round out that of the milk chocolate and and a spiced taste that works ever so well with the chilli’s spicy after bite.

And I feel that’s all I can really say other than that this is an amazing treat with such love and attention to detail put into its flavour and appearance that it would make an excellent gift for anyone. Even yourself.