Hello again spice lovers, it’s thursday and I have something rather wacky and Sci-Fi to show you. 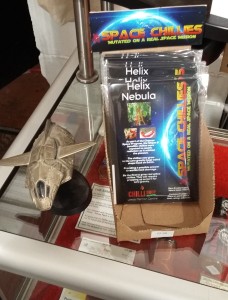 Some of my more chilli-savvy american audience will already know what this means but let me enlighten the rest of you, since they’re pretty much unheard of here in the UK.

Space Chillies are not a fancy name for dried ones like that unpalatable goo they call space food (which is incidentally the main reason I decided not to pursue my astronaut dreams). No, these are seeds for a new variety of chilli developed in space.

In the case of The Chilli Shop, it’s a variety named the “Helix Nebula”, a chilli named for its long, spiral growth pattern. There are, however, ten different kinds of Space Chillies, or Hangjiao as they are more officially known. Apparently they’ll be stocking more of them nearer christmas.

But a variety developed in space you ask? Well, the story goes that, as far back as 1987, scientists were questioning what would happen when they tried to grow plants outside of earth’s atmosphere. China, not wanting to be left behind in the ongoing space race, sunk thousands into real world testing every year. The results surprised even them, with the crops mutating insane size, productivity and disease resistance. It seemed to good to be true.

Which is why, 20 years later when the scientists finally announced their findings to the world, I paid them no heed. I mean, really. How could a 15 day space flight result in plants that were not only invariably changed for the better but also all bred true?

It couldn’t. And it didn’t.

Most of them germinated but, of the seeds that were sent up, only about one percent came back with what scientists deemed a positive mutation. And most of those weren’t nearly a giant as the ones the media picked up on.

But what caused them to mutate in the first place?

Some say it was the low gravity but, while that would certainly affect plant development, it shouldn’t alter the genetics in any way. It shouldn’t have affected the second generation.

Others say it was the cosmic radiation outside the Earth’s protective atmosphere and magnetic field. Western scientists, however, claim that seeds and seedlings are simply too robust for that to alter them so drastically.

And a third group claim it’s to do with the shifting magnetic fields as the plants orbited the Earth.

Nobody really knows and the few papers published on china’s “space breeding” research are resoundingly vague on the matter. What’s more, the US have been completely unable to replicate their results.

And yet the plants they produced are real.

The Hangjiao Space Chillies are direct descendants of those from China’s 2006 flight, the first to allow for recovery of the plants. Ten different varieties of unusual size, hardiness and vitamin C content all said to look more like trees than pepper plants.

The chillies themselves range from the smallest, an orangey-yellow thai style chilli called the Solar Flare that’s on par with the larger earth varieties size-wise, to the twisted jalapeño-esque Total Eclipse, which can weigh over ninety grams.

Unfortunately, since they’re so rare, I have not had the chance to try any of them myself, meaning that I can’t give you feedback on heat or flavour. All I can do is echo the words of american reviewers who tell us that they are generally sweet, juicy and fruity in a way that resembles dried apples more than it does your standard chilli fruitiness.

The Helix Nebula in particular is said to be so sweet as to be unsuitable for most uses besides thai food and salads, with flavour comparable to the juiciest long bell pepper.

Heat-wise, I’m told that the majority range from being so mild they could replace bell peppers all the way up to roughly cayenne level. None are particularly serious but some might be a shock to the system if you aren’t used to raw chillies. The Afterglow, however, is something of an outlier. Depending on who you ask, its heat can be rated anywhere from Cayenne to Habanero levels but one thing is for sure, it is definitely the hottest of the bunch.

Despite that though, not one of these peppers is going to be a new world record in the heat department. They will make great cooking peppers for stir fry, blend wonderfully into a salsa, top pizzas or go into soups and stews, among other uses. Their relatively low heat makes them far more useable by the average chilli eater and their flavours apparently lend themselves well to many things.

But, if you’re a tiny bit more hardcore, some would also make great snacks straight off the plant. A nice treat after all your hard gardening work.

If you’re looking to grow something unusual that isn’t going to blow your head off or maybe just a talking point among your neighbours, this would be a great range to look into.

For more details on the different varieties or if you need further proof these giant chillies are real, here’s a list of their names so you can do your own research:

Sadly, I do not have the hands on experience to go into detail on every single one of them right now.

One thought on “Space Seeds”