Happy tuesday again, folks! Would you believe that I’ve got another set of review samples, this week?

Today’s pair come to us from Brighton Hot Stuff, who, as I’m sure you know by now, are a very collaborative bunch. Be it working with me, to show off their products, with the Lazy Scientist, for a fermented halloween special, or with the Chilli Children Project, to support a thematically appropriate charity with their Bird’s Eye sauce, these guys are always up to something. And, this time around, it’s a partnership with the famous Jaz Coleman, of Killing Joke, so that he can have his own hot sauce, to go with his recent pie line:

Yet I said samples, plural, so you know it’s not just his sauce on display today. No, I’m also featuring BHS’ other new addition to their line-up – Their Kimchi hot sauce:

Two products that, at first glance, have little in common beyond their producer. But both feature a key ingredient that’s completely changed otherwise awful vegan cooking, for me. So, in my mind, at least, they definitely belong side by side.

END_OF_DOCUMENT_TOKEN_TO_BE_REPLACED

Hey folks, it’s recipe time again but, this month, I’m doing something that I haven’t done in a while – Reviewing someone else’s recipe.

You see, as I mentioned at the beginning of the year, I’ve had plans for ramen for quite a while. Yet my dreams of fiery tonkotsu were scuppered at the very start.

As it turns out, that milky-looking pork bone broth comes not just from making your own stock but from boiling the hell out of it for hours and hours on end. From getting every single ounce of fat and flavour out of the meat, which neither you, nor I, are likely to have the time for.

So I was all set to move on and make something else. Until I saw this: 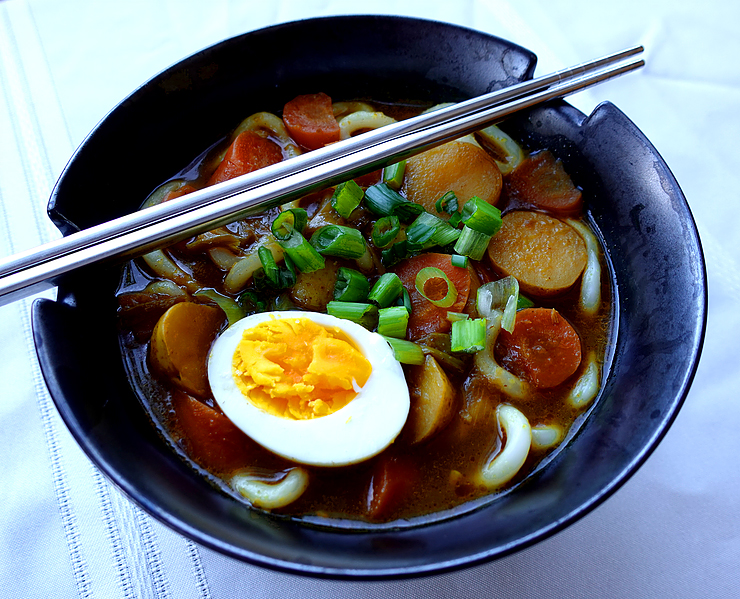 A dark bowl of coffee curry ramen made by Pixel Tea, as part of his “Gourmet Smash Ultimate” series of Super Smash Bros. inspired dishes.

It caught my attention with its theming – Derived from the favourite food and drink pairing of Persona 5’s protagonist – but also provided a fresh spin on japanese noodle stew and just enough spice that I could make it a feature.

In fact, Pixel’s overview alone was enough to sell me on this one. But the fact that his dish makes use of a custom spice blend, rather than a custom stock, is nothing short of a godsend.

It doesn’t make this a quick meal but it still cuts down the cooking time considerably. From most of a day to around two hours, all prep included.

So let’s see how it works out, shall we?