Hey folks, it’s tuesday again and, today, we’re taking a look a Geki Kara. A sauce by 3D Spice which stood out massively when it was featured among Bauce Brothers’ Hot 100. Albeit not necessarily for the right reasons.

In fact, I saw a fair bit of controversy around it, at the time, over its high price and the anime-esque, scantily clad, demon girl on its label. Implying that it might not have been the sauce, itself, which they were selling.

Perhaps I’ll mention her again, later on, but, now that all of the initial criticism has died down, what I really want to talk about is whether or not it was actually deserved. Because, with the bottle here in front of me, it’s clear that a lot more has gone into making the product than is immediately obvious online.

Hopefully there’s some real flavour locked inside, rather than it simply relying on a seductive exterior, like people thought.

END_OF_DOCUMENT_TOKEN_TO_BE_REPLACED

Hey folks, it’s recipe time again but, if I’m honest, this one was actually supposed to go up last week. I had a few technical difficulties with my camera and had to remake the whole thing from scratch.

So, that’s how my week’s been going, how about yours? I hope that you’re all holding up okay in the midst of this crazy modern mess and I hope that you’re all able to find a nice, secluded spot to go stretch your legs and get some sun. Because, as scary as this pandemic is, going outside is still important to your health.

With no end in sight, right now, it’s essential that you have a way to get all the necessary vitamin D and you’re not going to do it through diet, alone. Fresh fish just isn’t that readily available right now.

What you need is sunshine and that, I’m afraid, is not something that I can provide. But I can share with you a thematically-appropriate rice dish, at least, based on the work of Amano Hina – Weathering with You’s 100% sunshine girl. 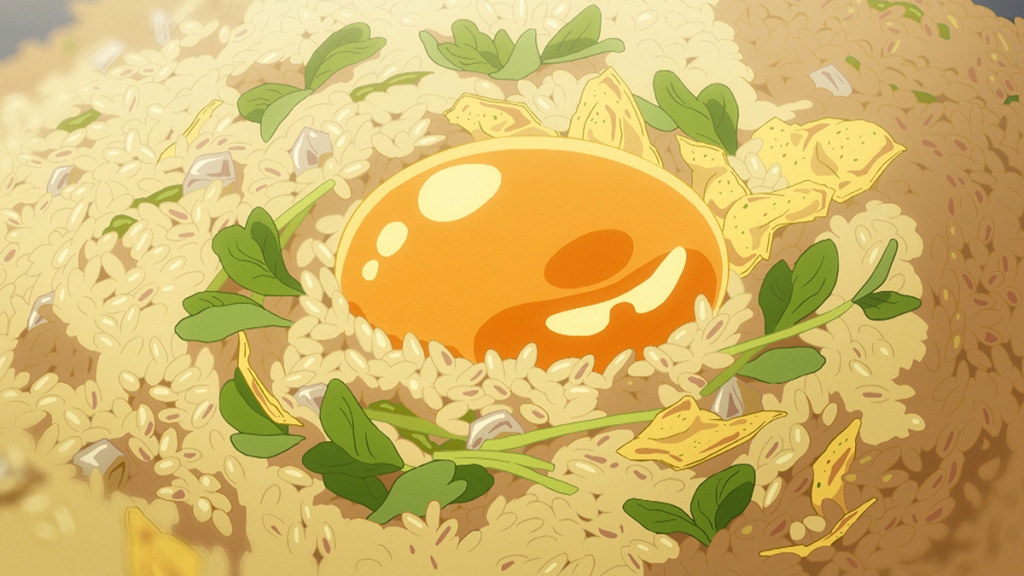 A simple, yet delicious, one-pan recipe that deviates slightly from the source material but still combines eggs, rice and crisps for a crunchy, warming meal that’ll add a little brightness at any time of the day. Though, personally, I like to serve it for brunch.

END_OF_DOCUMENT_TOKEN_TO_BE_REPLACED

Happy thursday again, everyone. It’s been a while, I know, and I’d love to say that that was just a lack of content to focus on but, truth be told, it wasn’t. The fact of the matter is that my time and effort has been going elsewhere.

You’ve probably noticed, already, that my video uploads have increased in frequency and that I’ve started what will hopefully become a series of feeding celebrities at conventions.

Well, editing takes time, celebrity interviews take research and more of them say “no” than “yes”. Combine that with learning a new editor that doesn’t limit my output quality and trying frantically to get my new camera to take video of a decent length and you can see where much of my time has gone.

Alongside, of course, my usual quest for interesting chilli items and the writing about such.

It is, in fact, only because I fell ill recently that I had to put everything else on hold and found the time to read a book:

The Hero and His Elf Bride Open a Pizza Parlour in Another World or, as it rather unsubtly names itself in chapter 6, “Pizzero”. The same chapter where it more tastefully name-drops Tabasco.

And yes, that single name-drop is the only acknowledgement of spice in the entire book but it’s still the story of a young man becoming a passionate chef and it came highly recommended. I gave it a go and I really hope that you’ll at least read what I have to say about it.

END_OF_DOCUMENT_TOKEN_TO_BE_REPLACED

I’m a massive nerd and, as I’m sure you’ve seen from my youtube channel, many of my friends come from the local anime community. I watch a tonne of the stuff myself, alongside my (board, card and video) gaming, but it’s rare that it ever crosses over into my main hobby. My sauce tasting.

Shokugeki no Souma (AKA Food Wars) was an exception. A glorious blend of absurdity and inspirational cooking that was so visually impressive and well described that I simply had to try my own hand at it in recipes. And I had to share my love of it with you.

Nothing since has quite captured the same thrill of culinary experimentation or tackled that crazy combination of Shōnen and cooking show genres.

Nothing has showcased the same burning passion of teenage chefs under pressure but the winter of 2017 and 2018 has given us plenty of food related anime all the same. One of which in particular I got very passionate about.

So, now that it’s finally stopped snowing and it’s starting to feel like summer, I’d like to look back at the winter anime season and discuss which foodie shows will and won’t be inspiring my cooking in coming months.

END_OF_DOCUMENT_TOKEN_TO_BE_REPLACED

Hey guys, it’s recipe week again and, while I’ve never been one for keeping different cultures of food separate if the work together, this summer sizzler’s a real melting pot of influences.

The original dish on which this month’s creation has been based comes from episode 16 of the japanese show “Food Wars” and, should you want to cook the original apple and bacon risotto, a recipe can be found for it in chapter 42 of the show’s manga.

But, while the fruity take on it may be japanese, risotto itself hails from italy and my take uses a morrocan-style spice blend with the peruvian lemon drop chilli to add a bit more substance.

The original did, after all, lose its battle in the anime for being too light and unsatisfying.

So, instead of an apple and bacon risotto, I shall be presenting you with a spiced apple and pear risotto that can be eaten hot as a main dish or cold for a smaller meal like lunch or the originally intended breakfast. Or simply if the warm weather is as agonising for you as it is for me.

END_OF_DOCUMENT_TOKEN_TO_BE_REPLACED

Konnichiwa my fellow spice lovers, today I want to talk to you about a show that truly captured my heart during 2016.

Shokugeki no Souma, or Food Wars as it is known outside of Japan, is a ridiculous anime in what’s known as the shōnen genre but it’s a little different to what that implies.

END_OF_DOCUMENT_TOKEN_TO_BE_REPLACED

Welcome back everyone, and welcome to the new year. The chinese new year!

To celebrate, I’ve been doing some chinese cooking and can offer you not one, not two, but three versions of my favourite oriental dish:

Mapo Tofu. A dish that, despite its vegan-sounding name, is one of the most highly meaty-tasting main courses in china. Yet there’s actually only a very small amount meat in it.

END_OF_DOCUMENT_TOKEN_TO_BE_REPLACED

Before we jump right into the recipe, however, I’d like to give you the opportunity to read up on the backstory to this dish and pick which of my three versions you’d prefer from my overview here.

This particular version is my anime inspired one. A powerful version with a little more depth of flavour to compliment its high heat.

The particular anime that inspired this recipe is the one that first introduced me to the dish, Angel Beats, in which only one small girl is actually capable of finishing it and it plays a small but surprisingly important role in the story.