So the theme for this week has been green and I’m going to carry that on today as I take you through a strange twist on a tomatillo salsa, adapted slightly from the work of Hunter, Angler, Gardener, Cook.

It’s a recipe that I employed because it uses a large amount of mexican epaƶoté in its fresh form – Rather than the dried stuff that I’m used to – and I had recently received a bulk amount, on import from holland. Along with some unusual peppers that you’ll be seeing soon.

As it turns out, the fresh herb is quite different from the dry and that difference stands out wonderfully in this verde but the plant does come with its fair share of warnings. Since, while it aids digestion, in small quantities, it can seriously hurt the gut, if overdosed upon.

I’m not going to go into too much detail on that in this post, given that the original recipe writers know more about the herb than I, but I will urge you to read what they have to say about their salsa before making it for yourself. As well as maybe not eating it all alone, since it’s pretty potently epaƶoté.

In fact, you might want to skip out on today’s recipe, altogether, if you have any pre-existing digestive problems. But, if not, it won’t hurt to try it and it’ll provide you with a unique look at mexican cooking.

Despite how traditional it is, this blend of fresh, charred and roasted greenery tastes like nothing else!

To make my version of the recipe, you will need:

½ a cup of fresh coriander

¼ of a cup of fresh epaƶoté leaves

And a good, strong blender, to mix it all together when we’re done. But before that, today’s salsa does, in fact, require some cooking. So let’s get started.

We’re going to begin by draining our tomatillos and halving them. Then peeling our half-onion and cutting it roughly into chunks of a similar size. And we’ll want to peel the garlic, too, but those cloves are small enough already. There’s no need to chop them.

So, once they’re peeled and not chopped but the tomatillos and onion have been cut down to size, it’s time to fire up the grill (or broiler, if you’re american) and slap the whole lot under it, upon a baking tray.

From there, cooking time can apparently be quite variable but, with my oven grill at full blast and my tomatillos still a little wet from their brine, I found that the light char that I was looking for appeared at around the twenty minute mark. 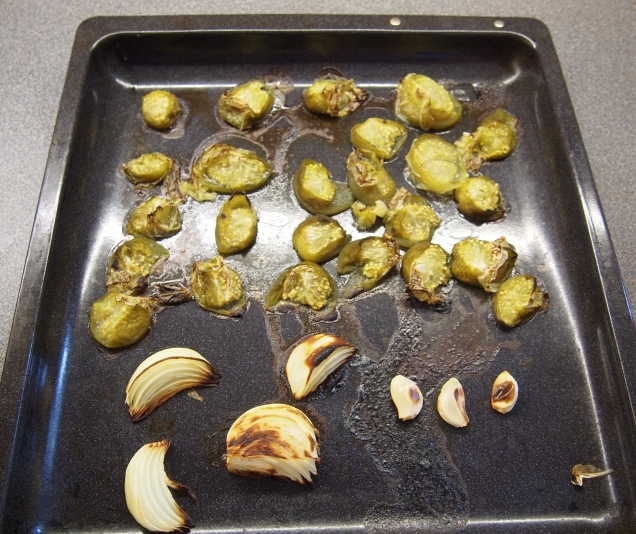 Though I did have to take the garlic out at ten and I used this as an excuse to flip everything, for more even cooking.

Yet, despite that moment of attention that the grilling ingredients demanded, there was still plenty of time where I could let them do their own thing and get on with charring the chillies. Which I did, on a skewer, over the gas flame of my hob.

And no, I didn’t use the serranos that the makers of this recipe recommended and nor did I have a good flavour reason for the swap, at the time, but, upon tasting the finished dip, I can assure you that my under-ripe lemondrops worked out for the best. Their soft, green, non-specific citrus flavour was far more at home here than the darker, grassier, more chlorophyll-heavy taste of serranos or jalapeños. For reasons which I’ll get into at the end.

Right now, you just want to make sure that they receive an even char and a light yellowing to their skin, like so:

After which you’ll probably want to cut them open and scrape out their seeds, while they’re soft, so that the salsa’s texture stays smooth. Though you could leave them in, if you’d prefer, for a little bit more heat.

Either way, we’re done with them, for now, and hopefully finished with the grilling, too. Which, if so, just leaves our herbs to be prepped.

An easy task, since they go in fresh and raw, but some stem removal may be required. Especially with the epaƶoté. Which isn’t to say that epaƶoté stems are particularly bad for you. Just that they’re a bit too tough for today’s recipe.

In what we’re making today, we want just the leaves of the epaƶoté and not too much of the coriander stem, either. And then we want to blend them.

And then we want to blend in all of the other ingredients, too, keeping going until we reach a smooth, green, tomatillo seed-filled pulp.

One with richness and earthiness, from the cumin and lightly-roasted garlic. With a strong, yet mellow, grassiness from the herbs and chillies. With a creamy texture and tang from its tomatillos. And even with subtle hints of citrus.

A salsa which, on the first taste, seems shockingly like guacamole.

But, when it hits my throat, this dip suddenly doesn’t feel like guacamole anymore. It doesn’t have that fatty, buttery quality about it and, for once, the only burn that I experience is the sharp, yet enjoyable,

on my tongue from its citrussy chillies. And even that disappears when I pop it on a tortilla chip.

It’s not hot but it’s flavourful and there’s a whole world of different notes that come through after the initial, guacamole-like body of this beast. Ones of cumin, ones of tomatillo, ones of fresh coriander and, yes, ones from the epaƶoté that are quite different to the pine-like dried herb that I’ve used in the past.

This epaƶoté still has an air of resin about it – In fact, that’s stronger than ever – and it has strong notes of generic green herb but it’s also highly reminiscent of the ozone-rich atmosphere after a thunderstorm.

It rides the line between natural and chemical and somehow finds a balance that isn’t quite either. I’ve had nothing like it before, even when eating the same herb in its preserved form. It’s utterly unique.

So I’m very glad that I got this chance to try it and I’m equally glad that I stumbled upon such a great recipe, full of complimentary flavours, with which to do so.

I’m not sure how many of you are going to get the chance to recreate what I’ve made, today, but I strongly recommend those of you who do to go for it. It’s definitely worth it to understand the flavour of fresh epaƶoté and some of the mexican cuisine into which it fits.

So, before I close out this here recipe post, I’d like to say my thanks, again, to Hunter, Angler, Gardener, Cook, for the original. Do go give their work a read.

And, also, here’s a quick link to my page on today’s pepper. Because what’s why point in having an encyclopedia page if I don’t reference it?