Attention: This is an old post reviewing a pair of products, one of which has since received significant updates. It will remain on my site, for posterity, and is still relevant to anyone interested in the Cornish Chilli Company’s Barracuda. However it does not reflect the latest version of Dorset Chilli Shop’s Dorset Punch. For up to date information on that sauce, please refer to this new post, instead.

Hello again, everyone, it’s tuesday and, while we did recently look at a piña colada sauce, it wasn’t a new one. It was a re-review of an updated product.

So, today, I’d like to take a look at a couple of similar items that we haven’t seen before, from our old friends Dorset Chilli Shop and the Cornish Chilli Company:

Both claiming caribbean influence – As one might expect of such pineapple, coconut and rum-based sauces – yet appearing quite different from one another.

Through the necks of their bottles, our view of the sauce is altered slightly by glass but we can still see that the Dorset punch is a rather paler, peachier shade than the earthy, golden-brown Barracuda. And its thinner, almost watery appearance shows a fair few pinkish-red chilli shreds that would be much harder to spot in the Cornish Chilli Co.’s creation.

I’m very curious to see how they’ll differ, outside of the bottle. Especially having seen their wildly different ingredients lists.

The Dorset Punch claims to be almost entirely fruit, with the following list:

Which sounds great but can’t be entirely accurate, given that just the listed percentages alone add up to a hundred and two. Never mind how much vinegar is or isn’t in there.

But it probably uses a good deal less than the Cornish Chilli Co’s Barracuda, which is first ingredient spirit vinegar:

A worrying revelation, considering how horribly sharp it made their previous sauce.

Yet their Red Snapper made wonderful use of that especially punchy vinegar, bolstering the tart flavour of its already-tangy grapefruit with the extra acid. So perhaps the company can make it work here, as well.

I’m not prepared to give up on the Barracuda without tasting it and, while I can’t see how such spirit vinegar could work with the smooth, creamy taste of a piña colada, I’m not sure that that’ll be an issue. The first five ingredients have nothing to do with the cocktail, after all.

The bigger question is, “How does it pair with a sweet potato base?” and I think that it’s about time for me to find out.

It’s a thick, chunky sauce that clings to my spoon, no matter how much I jiggle it, and sure takes its time getting out of the bottle. It’s aroma is a curious one but the exact details – Beyond the very obvious vinegar – escape my ability to interpret by smell. So I’ll skip straight on to the tasting.

The barracuda is powerfully acid-forward to the taste, as well, but it isn’t all spirit vinegar on the tongue.

That vinegar, itself, has very little flavour beyond just “sharp” and “tart”, allowing the sauce’s lemon juice to shine through, while its sweet potato, scotch bonnets and turmeric provide a surprisingly subtle, slightly fruity, earthy base. Then the promised coconut comes in for a smooth, creamy finish that wipes away any lingering acidic taste, even if my cheeks still feel a bit like I’ve just had warheads.

It’s an interesting experience and I’m a little taken aback by how well the taste transitions from sharp to smooth. I would never have guessed how well the coconut would work but, even so, there are things that are missing from the experience. Like any hint of that pineapple or rum.

And its burn which, while somewhere in the region of a high

again, is quite hard for me to make out when the sauce’s main sensation is one of sourness.

It’s better than the company’s chipotle sauce, in my opinion, but I still don’t see myself using it for anything other than adding earthiness to creamy curries or creaminess to root vegetable stews. Both uses where a little can be stirred into a big pot to hide the acidity or even cooked through to evaporate some of it off.

I know that I called Chilli of the Valley’s Calypso “sharp” but even the first version of that product didn’t hold a candle to today’s’ initial impact. And no amount of smoothing out the tail end with coconut can change how I feel about the rest of Cornish Chilli Co’s Sauce.

I’ll make use of it, now that I have it, but I won’t be buying any more Barracuda and I wouldn’t recommend it to anyone else.

But what about our other item? The Dorset Punch?

That sauce, from Dorset Chilli Shop, is far thinner than today’s first taster and fills my spoon with ease, quickly taking on a very similar look to what it had in the bottle: 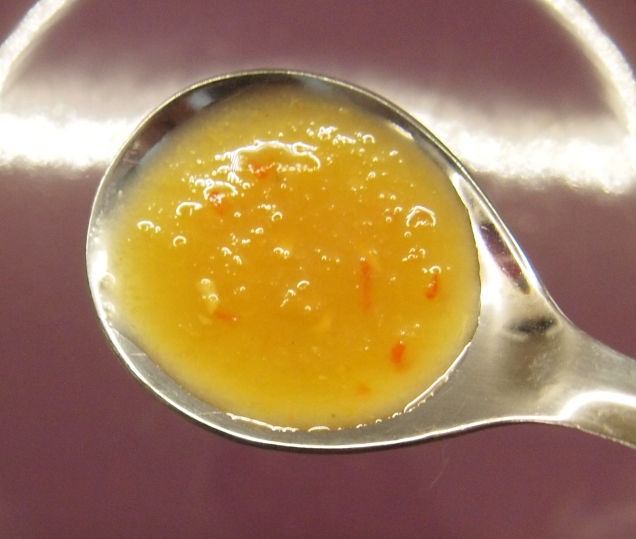 The only difference, now that it’s out in the open, is a slightly more saturated set of colours, further highlighting its red dorset naga shreds.

It looks light and fruity and, indeed, I can smell the softened pineapple within, yet it’s not the first scent to reach my nose.

No, the winner of that little race would be the alcohol, swiftly followed by the spiced rum in which it appears to have been contained. Dorset chilli shop have gone a little crazy with the booze but, as always, the alcohol is more prominent in the aroma than the taste – Being comprised of volatile compounds and whatnot.

As I raise the spoon to my tongue, the sweet, tropical tang of pineapple – Barely acidic at all, after that last sauce – is the first flavour to greet me. Softened, like its smell, by a touch of coconut that subtly lends its own taste to the sauce, as well. An interesting role reversal, considering how the other two piña colada products that I’ve tried have both been coconut with a touch of pineapple.

In this sauce, it’s definitely the pineapple that dominates but the rum is pretty hard to miss, too. Though I’m a little unclear, now, on what sort it is.

It’s not spiced rum, despite what my nose told me. That isn’t cinnamon, allspice and cloves but the toasted, browner than brown flavour of coconut sugar. And, while I don’t quite get white rum from it, it could be that same dark sugar taste tricking me again. Especially since it’s definitely not as powerfully dark as Kraken or O.V.D. brand.

Whatever the case, though, the product’s seemingly mid-tone rum works perfectly with its tropical fruit and coconut sugar, adding just the right depth to this soft yet vibrant, pineapple sauce. A sauce which I could see dressing everything from salads and shellfish to jamaican patties and chicken, or even adding extra brightness to a light, thai-style curry.

I wouldn’t expect it to hold its own amidst something as bold as an indian dansak but the Dorset Punch still feels like a highly versatile product. Albeit perhaps not quite as extremely so as its makers suggest, since, while I’m sure it’s make a great addition to any pineapple or mango-based cocktail, their idea of pouring it over ice-cream doesn’t work for me. It’s close, though, I’ll give them that.

They’ve crafted a great, low-vinegar sauce, using the fruit, itself, for most of the necessary acid but it still stands out as surprisingly not sweet when sitting atop frozen dairy. A fact for which, I suspect, the chillies, themselves are responsible.

of its dorset nagas. Peppers which carry a similarly savoury taste to the better known ghost, along with just a touch of bitterness to balance out the sweet of the fruit.

Still, they’re neither a bad pepper nor a bad fit for this sauce and I do seem to be especially picky about what hot foods I enjoy over ice-cream. So perhaps the pairing will work better for some of you.

It’s worth a try and so is the product in general. It might not be the same creamy piña colada as Chilli of the Valley’s Calypso but it’s a wonderfully soft yet punchy, rum-forward take on a pineapple sauce. And I don’t know about you but that’s actually rather more of what I’m into.

Art-wise, neither of today’s products are particularly noteworthy. The Barracuda is nothing more than a blue take on Cornish Chilli Co.’s Red Snapper, with a different kind of fish that has nothing to do with its caribbean theme. And the Dorset Punch’s red and black text – The only thing that sets its label apart from Dorset Meadows – says equally little about its contents.

The Punch’s labelling is sleek, simple and beautifully foiled but that’s all that I can really say about it. It’s not specific to the sauce in any way and it’s that sauce that matters to me. That flavour that earns my wholehearted recommendation.

Dorset punch is definitely the one to go for, if you like tropical fruit and ghostly heat.

Though, if it’s that heat that you’re after, you might also want to check out my Dorset Naga encyclopedia page. Or the one for the Barracuda’s red Scotch Bonnets.

2 thoughts on “Another Piña Pair”