Hey folks, it’s tuesday again and, being the 30th, you might think that we’d be through with my birthday content. But you’d be wrong.

People have been generous, this year, and Tom’s Curious Sauces is no exception, having sent me this pair specially.

The chipotle being Tom’s mildest, yet also my favourite flavour from his range.

But what’s that to the side of it? Something new. Something hot. And something very, very ghost pepper.

It’s the final version of a product that I’ve been helping him taste test. Though it looks rather different from the Honey Ghost that you may have seen, behind me, in recent videos.

I’m looking forward to seeing what’s changed, as well as having another crack at his wonderful chipotle blend, so let’s give them both a go, shall we?

Getting straight into things, the chipotle is dark and shiny, with exactly the colour that you’d expect from such a smoked chilli sauce. Somewhat thick, in texture, yet still perfectly smooth, as it flows from the bottle to fill my spoon. Or at least comes close to doing so.

I wanted to leave a little metal exposed at the edges, so as to better highlight how this sauce’s surface holds its shape:

No, the scent on this one is tangy, not sweet, and full of a more umami-laden darkness than anything that you might get from molasses.

It’s rich, slightly oaky and oh so very savoury, yet there’s something there that I can’t quite place. At least, not from the aroma alone.

A quick look at the ingredients, however, answers all my questions:

That umami note’s coming from several different places, including the thoroughly cooked tomatoes of the adobo sauce, but the main one is a strong soy. One that, when it comes to tasting, provides a slight fermented flavour and a definite asian vibe.

As Tom says, this is going to make an amazing marinade for pork, beef, tofu or ribs.

Yet it isn’t entirely asian, either. The hints of cooked tomato and cumin, from the adobo, add a subtle mexican feel that will play well with burritos, while the touch of lime that balances out the sauce’s richness does nothing to detract from that side.

It’s a bold flavour, and one that’s mostly just umami-backed chipotle richness. Yet there’s a subtle cultural fusion going on behind the scenes, in order to give it a lot more nuance than you might first think.

And, while it is very much a chilli-forward sauce, it’s a lot less spicy than you might expect, as well, lingering at the upper end of mild, with a high

One that warms mostly just the roof and back of my mouth.

For me, this sauce could be a good deal hotter. But it doesn’t need to be. Its taste is more than satisfying enough, as is, and it’s even better on a dish, like kedgeree, where there’s already a smoked component for it to amplify.

To put things simply, this sauce is about the flavour, rather than the fire. It’s ideal for those with a low chilli tolerance, yet also manages to be delicious enough that I could recommend it to absolutely anyone with a fondness for smoke. And it has to be my personal favourite, when it comes to non-barbecue, chipotle-based sauces.

Tom did an incredible job on this mild number but, then again, I already knew that. I’ve tried this one before. Albeit something of an off-record experience.

No, the real question of the day lies with his ghost pepper sauce, since that one is completely and utterly new. And it looks to have very little in common with the chipotle. 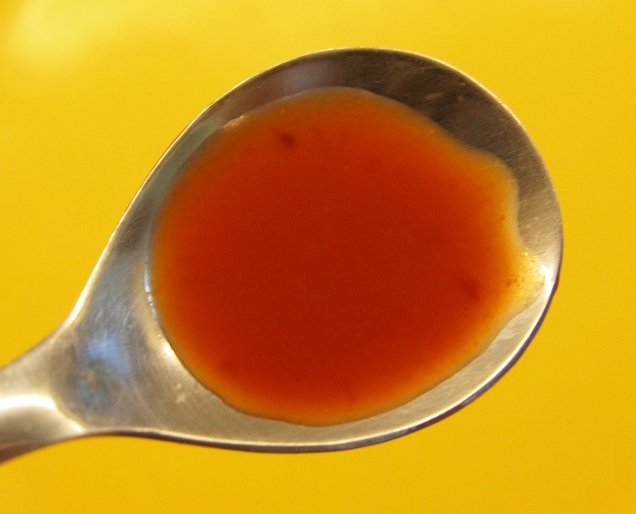 As you can see from my spoon pic, it’s a lot thinner and doesn’t hold its shape in the slightest. But it does still hold plenty of chilli and you can see several flecks of the namesake ghost beneath its surface.

A chilli that, according to its maker, accounts for about forty percent of the sauce. Yet it’s only the second ingredient, this time around:

As we saw in Tom’s old 📽️ Weapons of Ass Destruction 📽️ line, he likes to use tomatoes and a small amount of sugar – in order to bring out their fruitier notes – when working with ghosts and scorpions. It’s a tactic that served him well, from what I recall.

Yet, this time around, I can’t smell any of that fruitiness at all.

I’m getting the more vegetable-like side of the ghost pepper on the nose – Not green but not far from it – alongside a whole load of pungent pepperiness and maybe, just maybe, some small hint of that garlic powder.

The aroma of today’s second sauce packs a real punch but not in the way that I’d expect from anything in the naga family. Instead, it smells almost like a jigsaw, with just how much of that peppery, superhot chinense-type chilli funk is coming through. And I don’t really know how best to describe that to any of you who haven’t experienced the almost floral, aromatic pepper taste of a red savina, moruga scorpion or similar strain’s placental tissue.

The only thing that comes to mind, right now, is Food Wars‘ description of the overpoweringly “smelly”, gamey taste of bear meat. A meat that is used, in the show, specifically because of the huge challenge that it provides the chefs.

It’s like that, in many respects, but backed with some of the deep red flavour of the ghost pepper, rather than anything actually meaty.

Some people enjoy it but I, for one, don’t really see the appeal. It’s the part of superhot peppers that I’m not into. That I work around, when cooking with them.

Yet, generally speaking, I don’t have to work too hard. It’s not a major component of their flavour. Not in anything but the jigsaw and, apparently, this sauce.

Because, when it comes to tasting, this one’s very similar to how it smells. Only a little tangier and saltier, despite the lack of any such salt in the ingredients.

I don’t think it’ll come as any surprise, then, that I don’t much care for this sauce.

I could see it working well on Tom’s jerky, or as a marinade for dark meats, in general, where it’ll have a strong, savoury richness to pair off against and the long cooking time will take the edge off. But, on the whole, his ghost pepper just isn’t for me. And it’s like no other ghost sauce that I’ve tried.

It almost makes me think that he’s used something else but those deep red undertones are unmistakable. And so is the high

kickstarted by the sauce’s tang but still growing slowly in the back of the mouth and throat thereafter.

It certainly feels like a first ingredient ghost pepper product, so I find it pretty hard to believe that it could be anything else. Even if the tomato that I’m not really tasting does, in writing, take the top billing. The two must be pretty close in their actual quantity.

Still, I can’t help but wonder why Tom’s ghost peppers taste the way that they do and why he made such a drastic change between the samples that I was enjoying and this final product.

The only similarity that I can see is the thin texture, which he’s now added a flow restrictor to help control: 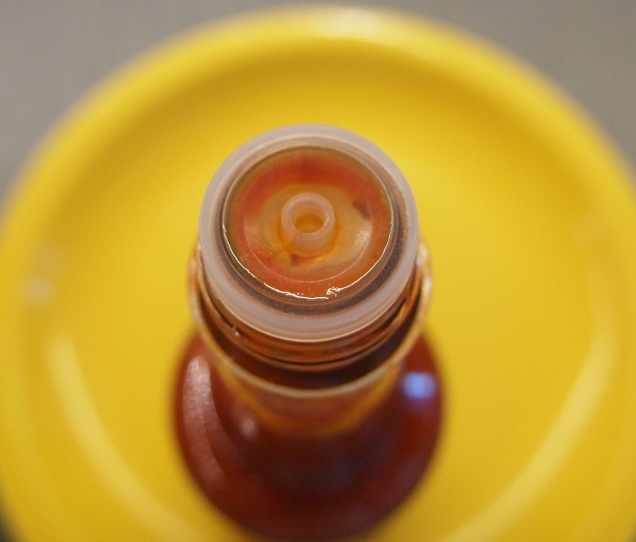 I approve of that, just like I do of his glorious, high-class metallic labelling. But I’m left wishing that I could say the same about the sauce inside.

For me, at least, the taste of Tom’s ghost pepper doesn’t even come close to the gloriously high bar set by his chipotle. So, of today’s pair, that’s the only one that I can recommend.

I recommend it a lot, though, since it really is a favourite of mine, and his scorpion – Formerly known as his 📽️ Nuclear Bum 📽️ – is another real goodie, if you’re in the market for something super.

Tom makes some great sauces. I just can’t recommend his latest, is all.

Though I can link you to my encyclopedia page for the ghost pepper, if you want to see what else I’ve had with that chilli. And, while I’m at it, here’s the chipotle one, too.

Plus, I’d also like to thank Tom for his generosity, before I close out this post. He’s sent me and my colleagues quite a bit, over the last few months – Far more than you’ve seen today – and I’m definitely going to be adding his site to my list of links in the very near future.

As soon as I’m less swamped with work, I’ll write you all a quick overview of his company and stick it in the side bar to your right. He’s earnt it and his products are well worth checking out!

6 thoughts on “Two from Tom”