Hello again everyone, it’s the last sunday of the month and I’m sure you all know what that means. It’s recipe time!

Now, of course, I don’t always leave my recipes until the last minute like this but, well, my access to ingredients has been somewhat restricted, lately, and I’ve had a lot to do in the last week or two. So, this time around, I’m falling back on a silly suggestion from my friends, mixed in with a family staple.

I’m making udon bolognese – A variation on the classic spaghetti dish using thicker, heartier noodles and a bit of jalapeño-based spice in its sauce.

It’s not traditional and it’s made even less so by the fact that what I know as “bolognese” is actually a twist on spaghetti and meatballs, handed down from generation to generation. Yet it’s still delicious and hey, isn’t that what really matters?

Here’s my take on an italian pasta dish, with just a little bit of a japanese twist.

For today’s recipe, you will need: 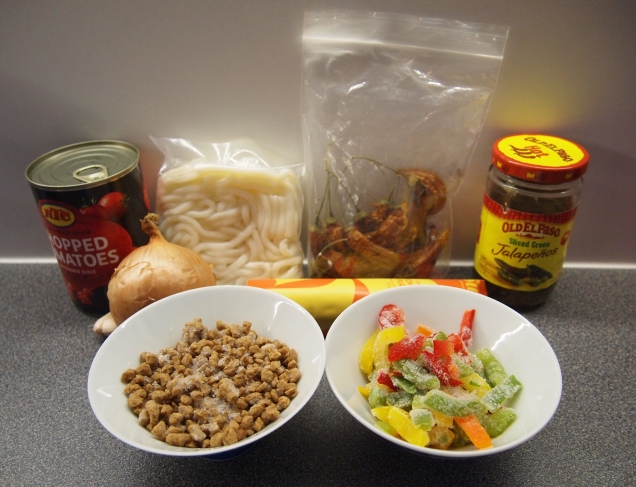 And I’m going to leave exactly what type of stock and mince up to you but I opted for veg and pork, respectively. I enjoy how the richness of the meat pairs with the stock’s greener notes, from things like celery. By all means swap to beef and beef, though, or maybe lamb, if that’s what you’d you prefer.

Likewise, I used dried lemondrops but you don’t have to. You’ll probably get a brighter flavour from fresh, if you can find them, but dried was all that I had on hand, at the time when I wrote this recipe.

So, with that said, we can now move on to the method. There are, however, a few bits and pieces that it helps to prepare before we begin actually cooking things. Such as separating the tomatoes.

Yes, separating a tin of tomatoes into its solid and liquid components. Easy if your toms are whole but a challenge that will require a colander, otherwise. Not a sieve.

Why separate the tomatoes, though? That’s simple.

I want to infuse our udon with the flavour of a thin, tomato-based broth that they can soak up, while still having the rather thicker topping that I prefer on italian-style pasta. It makes sense to separate the thick and thin components, in order to more quickly achieve both of our desired consistencies.

And then, I suppose, it’s time to finely chop the onions, garlic and chillies, like in many of my other recipes. After which we can finally get started.

Heat a tablespoon of olive oil on a medium flame and toss in half of your garlic, frying for about a minute, or until you can’t help but smell what’s cooking. Once the strong aroma wafting from the pan has filled your nose, it’s time to add in the onion. Well, half of it as well.

This addition wants to cook for another few minutes – Around three, by my estimation – stirring until it just starts to soften. At which point the mince, oregano and half of the tomato purée can join it and fry off until they start to stick, leaving brown meat residue on the bottom.

You’ll need to add the tomatoes quickly, chopped into chunks if they weren’t already, in order to keep everything from burning. Yet you won’t need to add any of their liquid. The juice inside of them should be enough.

Stir everything together and raise the heat just a tad, bringing it to a simmer. Then keep it there for five minutes before adding the peppers – Jalapeños and bells but not lemondrops – and continuing for five more.

Your mince-based topping is now ready. Set it aside but keep it warm while we formulate the broth.

For that, we’re going to begin in the same way as before, frying the remaining garlic and adding the rest of the onion.

This time, though, we’re going to fry that onion for several minutes longer and watch as it picks up a slightly yellowed or golden hue:

Then we’re going to quickly coat those onions in the remaining tomato purée, before adding the juice from our tinned toms, the jalapeño pickle juice, the bay leaves and our lemondrop chillies. After which, the whole concoction can be brought to the boil, in order to infuse the heat and cook off some of the acid.

Five minutes later, that process should be complete And we can add the stock, bring it back to the boil and pop in one of our udon packets.

The pale, chubby noodles take the form of a brick in their packaging, though, and won’t separate until they’ve been fully soaked. It takes three minutes to cook them but you may have to flip them after about a minute, if your pan is like mine and doesn’t allow the slab to fully submerge.

And don’t even think about trying to cook both blocks at once. The liquid called for in my recipe will only cover one at a time, at most, even if it is more than they can actually absorb. And that last little bit can be drizzled over before we top the dish.

With three tablespoons to each bowl and the topping evenly divided between the two, you should wind up with something like this:

A big bundle of chunky, rich and tomatoey noodles with just the slightest hint of citrus, topped off with a whole heap of herby, meaty, green chillied goodness. One that, unlike in an actual meatball dish, will spread itself semi-evenly throughout meal as you eat.

It’s delicious, hearty and everything that I had hoped it would be but, between the incredible heat retention of the udon noodles and the upper

of their sauce, this isn’t really a summer dish.

It holds the strong, full-body warmth of a late autumn or winter comfort food, so might be better to make around then but, well, I was short on time and ideas this month and I’m still very happy with how this recipe came out. Even if I would have rather posted it later in the year.

Please do come back to this one, when the time is right, and, in the meantime, why not check out my recipe catalogue or the pepper encyclopedia pages for the lemondrop and jalapeño that went into this not quite bolognese?