My god, you lot, it’s tuesday and I’ve only just recovered from this year’s birthday post. I’m going to need something extra mild for today’s review. So it’s pretty fortunate that I’ve got just the thing:

This is the Mild Beast and it’s from a company who’s sauces I’ve been liking a lot, lately. Yet it shows a very different side of them.

You see, while it might be another Hot Pods product, this particular sauce isn’t the work of Stephen Dixon. It’s made by his daughter – The supposed boss of the company – and it’s made for younger palates, like hers.

The Mild Beast is designed to be heavy on the fruit, light on the vinegar and much much milder. Forsaking the company’s usual chilli blend in favour of a single, not so superhot, pepper.

And yes, I picked it up now because I looked at the calendar and knew that a monday birthday spelt trouble. But I was already planning to try it, anyway, because I find the idea of hot sauce by kids for kids intriguing.

Especially when the label is so clearly their design.

Now, of course, this isn’t the boss’ original sketch – It’s a digitally-rendered artists impression thereof – but the concept remains her own. One that depicts a cute, slightly chubby creature, covered in off-white fur to accentuate its baby animal features.

Yet, despite its initial cuteness, I can’t help but get antagonistic vibes from the thing’s confident pose, mismatched stare and offhand munching of yellow chillies.

Add to that its edgy blend of small horns – Signalling cheekiness – and angel wings – Raised for maximum impact – and the little one is definitely challenging me to a showdown. It’s as if they’re saying that their sauce is beyond my ability to handle and daring me to prove them wrong.

That’s pretty funny, coming from such a “mild beast”, but who knows, maybe it’ll actually draw in the challenge-seeking child audience. I do see people like that, in my line of work.

As for myself, though, I’m more sold on other aspects of the art. Things like the clear ají limo peppers, the fact that this creature resembles the mogwai from Gremlins and the label’s background colours.

Because no, those shades of orange aren’t just for show. They’re to hint at the fruit within. The orange plums and real oranges, from which the sauce gets its fruity flavour.

I like the art a lot. It’s cute, referential and informative, all without being overcomplicated, but I think it’s time that I tried the sauce, itself. 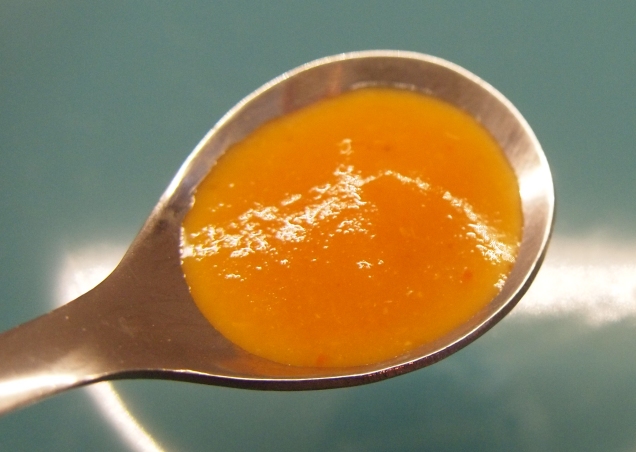 It’s pulpy and fairly thick, with pale shreds which could be the chilli or could, perhaps be orange zest. It’s hard to say for sure but the redder flecks are definitely its bell peppers and the body of the sauce is almost entirely fruit.

Onion and garlic, adding a touch of savoury richness and depth, are the only non-fruit, non-pepper ingredients that I can taste, while not even they come through on the nose. The aroma of this one is mostly orange and plum, with a very discernible lemondrop quality – Both citrussy and yellow pepper, yet not especially acidic, like real lemon would be.

Which is interesting because this is an acidic sauce, simply by virtue of how much orange it uses. One that’s tangy, zesty and even, interestingly enough, bitter.

Yes, bitter, like marmalade – The more stereotypically grown up counterpart to jam. A spread which is known not to appeal to younger tastebuds because of its bitter citrus peels.

Which makes it seem like an odd choice for a specifically child-oriented hot sauce.

And, likewise, it’s pretty surprising, to me, just how much of the chilli – That fresh, lemony, slightly vegetable aji limo – comes through in this sauce’s initial flavour. The upfront, sweeter, orange plum-based taste that hits first, before that bitter peel and the eventual

A burn that only reaches the very bottom of that number, sure, but still one that stings my throat and the roof of my mouth a bit more than I’d expect from an extra mild sauce with a one quarter out of five chilli rating.

Between that heat and the sauce’s bitter flavour, I have to question if Hot Pods’ “Mild Beast” is really aimed at the right audience. It certainly doesn’t strike me as the best thing to have on chips, in place of ketchup, as its makers suggest.

Where I’d rather see today’s product is on chicken – Coincidentally a mogwai favourite – or other bird meats, over my enchiladas or mixed into a noodle stir-fry that’s filled with fresh veg to compliment that baccatum green note from its chilli.

It’s not a bad sauce and I definitely enjoy the feel of all of its fruit pulp. Yet Saucey Lady‘s St. Clements provided something very similar at a slightly lower heat and with a much less bitter, more pepper-forward flavour. As far as mild lemondrop sauces go, that one impressed me a lot more and the same can be said for Hot Pods’ other items.

Despite my initial excitement, this isn’t a sauce that I’d feel good recommending to anyone but marmalade-lovers and diehard Gremlins fans. But, if you’re still interested, here’s the ingredients list from the bottle:

And here’s a link to my yellow ají limo encyclopedia page, for more information on the pepper, my uses for it and a whole host of other products which I feel have made more from it.

Hopefully next week’s review will be rather more positive.

5 thoughts on “The Marmalade Beast”