It’s monday, dear readers, and, while it might not be my usual blogging day, it is, in fact, my birthday. The day where I turn a year older and I mark the occasion with something stupidly hot. An extract-based sauce or two to make me suffer for your entertainment, as well as the entertainment of those who craft such fearsome concoctions.

As I mentioned, last week, this year’s post is dedicated to Dan Reed and his company, Chilli of the Valley. A company who kindly supplied me with one of their hottest natural products as an appetiser.

Yet I kind of suspect that that’s all that Dan meant for his Black Death to be. Because it may have been hot and tasty but it sure didn’t pack the unnatural punch of a sauce like this:

His Phwoar Koff and Dai.

Not that it’s actually meant to be read as “Phwoar Koff and Dai” but, well, I do try to keep things family friendly on my front page. And I’m sure that we’ll all understand what it really means once we’ve tried it.

Yes, this is a sauce for masochists and its label isn’t ashamed to say as much.

It shows a pale figure, clad in what I can only assume to be the attire of a hindu god, holding the carolina reaper aloft as they completely ignore the pepper and, instead, pour this very sauce straight into their broken skull. Eyes rolling back in some twisted form of bliss as they do so.

The sauce then spews out, oncemore, from between the teeth of an already melted jaw, and joins with the fire in which that central character – And indeed, the entire bottle – is wreathed.

It’s pretty freaking metal but it doesn’t end there. The artist also provided an animated gif, which they claim is how it looks afterwards, when you’re hallucinating from the heat:

It’s weird, trippy and about as adult-oriented as a label can get before shops have to start censoring their shelves but it looks good and it gets the point across.

This is a sauce that uses ingredients even hotter than the world record pepper, it’s made for the burn and it’s aimed at people who enjoy suffering.

Also, it might have a bit of an indian flavour but I don’t see anything especially indicative of that in the ingredients:

Yet there is one sure fire way to know: 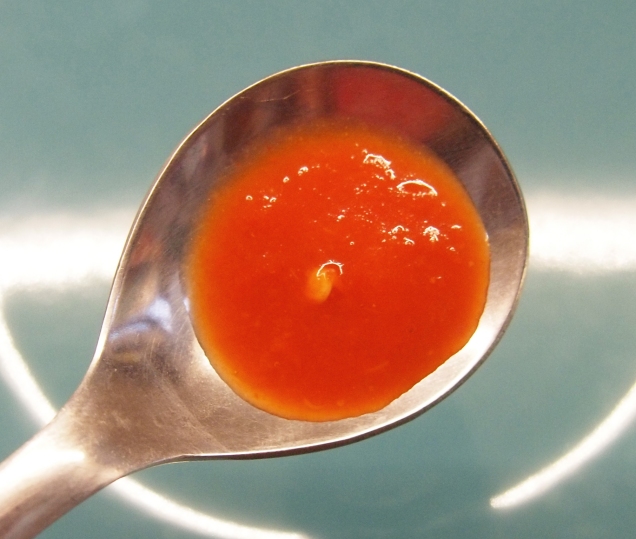 Don’t worry, though, this spoon is just for show.

It highlights the medium thickness, seed content and slightly fruit-grained texture of the sauce, before I transfer it to a cocktail stick for the real taste test. Since this wall of text on the side of the bottle makes it darn clear that really shouldn’t be trying it straight at all. 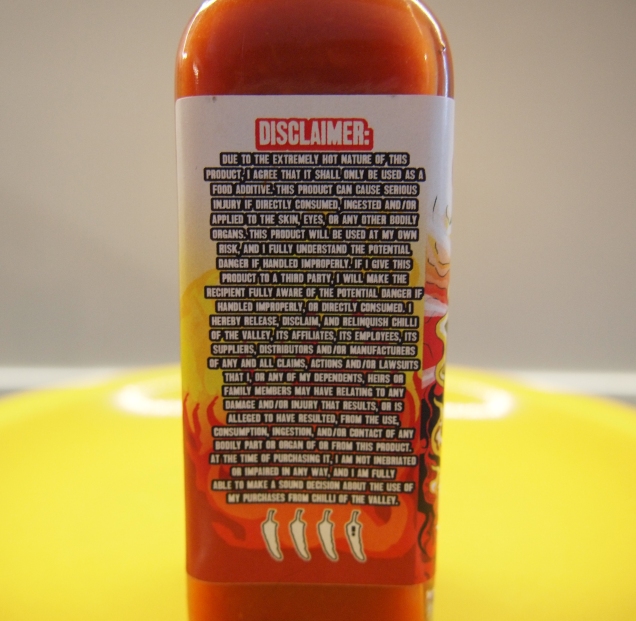 I’ll break the rules but I don’t have a death wish and I’d rather like to taste it before I start rolling around in agony. Not that its pungent, peppery aroma gives me much hope for the flavour.

Still, I tuck into my tiny little stick tip serving and its not that pungency that hits me. It’s a rich, deep, red, ghost pepper-forward blend of superhots with a little extra brightness from the fruit.

Nothing overly complex, like what we saw from Wiltshire Chilli Farm, but enjoyable, all the same, and enough to mask most of the extract. There’s just a slight bitterness that comes in with its

and not even the least bit of that disgusting, overcooked taste that I’m used to.

This isn’t a sauce that you should buy for flavour but the flavour of it is surprisingly good and its simplicity will allow it to pair reasonably well with just about any meal in which you might want such a searingly hot, sharp burn. One which sets in quickly but not instantly, feeling almost as if it’s slicing straight down my tongue, from tip to tail, as it does so.

It’s a stupid heat that no-one should ever need but, if that’s what you’re looking for, Phwoar Koff and Dai will do you proud. It’s an excellent example of an all purpose extract sauce but, as it turns out, not the only one that the company produce.

They also make a second unnatural item called “This System Kills” for a hardcore welsh punk group of the same name. Though it’s honestly quite hard to read the label.

There’s none of Phwoar’s bright colours and indian influence here. Just the black and white, grungy look of an old anti-establishment band poster, self-printed at home on the cheap. But don’t get me wrong, that’s not a criticism in the slightest.

This art accurately captures the DIY edginess at the heart of classic punk, whilst depicting the band’s lead singer in the middle of what I can only imagine might be his most passionate performance. Though perhaps not his best, considering that he’s swapped out the microphone for a sauce that’s melting his mouth away.

It’s not the ideal indication of what’s inside and, despite the apparent burn, it’s not even immediately obvious that it’s hot sauce. This illustration would be just as at home on a rum or whiskey bottle as it is here. But it does capture the spirit of the band and their music ever so well.

And, looking at the ingredients list, that whiskey bottle vibe might be more intentional than I first thought:

There’s actual whiskey in here and I can smell it when I open the bottle, working with the brown sugar and the non-specific spiced notes of the pepper to produce an almost cinnamon aroma.

Add to that a dash of zesty mexican citrus and my spoonful has me salivating. 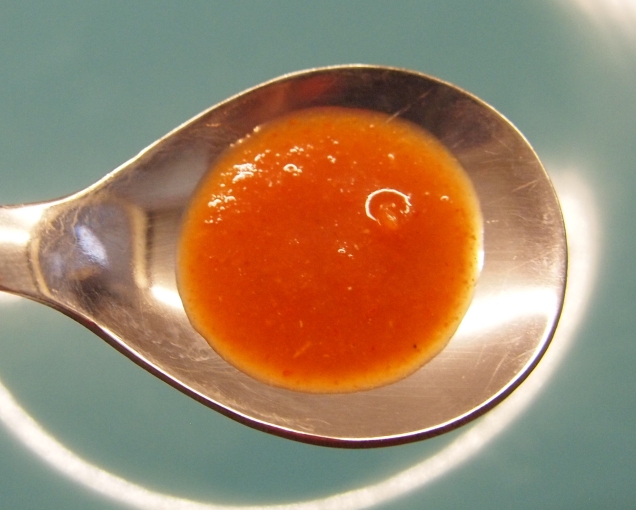 But there’s still a hint of that peppery extract smell in the mix, no matter how much more enticing this sauce might seem, that reminds of the extract inside.

When it hits my tongue, it carries a slightly lighter red chilli flavour than the last and its acidic fruit is even less obvious. But what actually sets it apart are the woodier tones of its dark sugar and alcohol – considerably stronger than what my cocktail stick normally provides – and the more apparent onion.

There’s not a tonne more to say about the TSK sauce’s taste than that, though, since it’s no more complex a flavour than the Phwoar. And, while it also provides a considerable tip of the tongue and back of the throat burn, it’s a much lower

that only just beats out their Black Death.

It’s not outside the realm of nature, like its brighter-looking brother, so it doesn’t come with any of the same warnings, but its still up towards the higher end of what Reaper products can offer and has me chugging non-alcoholic drinks when I eventually do try it on a spoon.

It’s alright. It does its job but it doesn’t do much more and, personally, I don’t see any reason to purchase it unless you like the band.

The flavour is good but not special in any way and you can get the same spice level more naturally if you want it.

Get Phwoar Koff and Dai if you want something truly extreme. It’s simple and versatile, yet very, very hot indeed.

5 thoughts on “Pineapples and Pain”