Hey folks, It’s less than a week until my birthday and I’d love to celebrate with you all but I’ve got the plague. Though maybe not the one that you’re thinking of.

The Black Death, from Chilli of the Valley. A special little something that they sent to fill the gap before my traditional, yearly suffering.

It’s a sinister blend of carolina reapers and black garlic, intended to serve as the appetiser to next monday’s main event. Something crazy hot and full of darkness, yet also rather more natural and flavour-focussed than what I’ll be doing for my special day.

And, while this one may have been a freebie, I had my eyes on it long before they sent this bottle over. So you’d better believe I’m excited to crack it open!

Yes, this week I’m going to get straight into the sauce and come back to its packaging at the end. Because I really can’t wait. 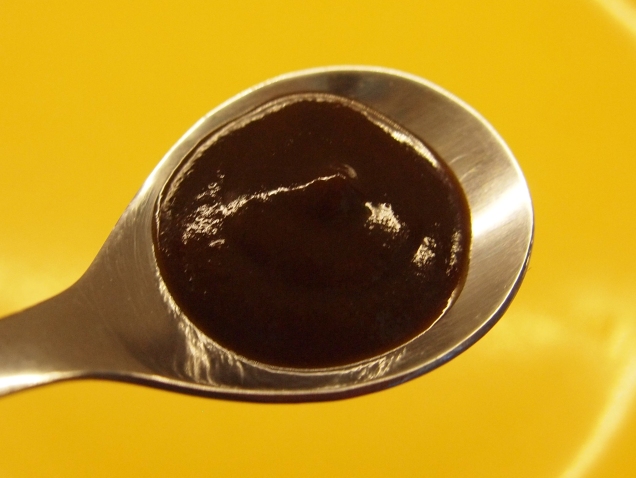 The Black Death is thick and syrupy, in a similar way to most barbecue sauces, but its aroma is far more savoury than that would imply.

It’s dark, yes, and also rich, but it isn’t sweet and it smells like something that’s been through a remarkably long cooking time. There’s a definite tang to it, albeit far less than in my last Chilli of the Valley sauce, and a little something else that I can’t quite put my finger on. Something that reminds me of marmite and worcestershire sauce or, perhaps, the results of fermentation.

Yet there’s no fish or yeast extract in today’s product, nor any fermented ingredients. Not even the black garlic, which Chilli of the Valley call “fermented”, actually is. Because fermentation is a bacterial process and black garlic is made by slowly breaking down regular garlic’s sugars with a gentle, fortnight-long, heating process.

So what it is, then, that my nose is picking up on, is beyond my ability to decipher. I’m going to have to find out the hard way.

And believe me, it is the hard way!

This sauce may only be rated three out of four chillies on CotV’s “mild – extreme” scale but that number four spot is for their extract sauces. This one still brings a crazy

which makes my job, as taster, that much tougher and more delicate.

It doesn’t hurt the Black Death’s usability, mind you, because it’s also as intensely rich and dark in the mouth as it smelled on my spoon and will add so much depth to cooking that it’s unreal.

Sure, it can blob its way onto tacos, if your tolerance is that high, but why do that when you can mix it into your salsa? Or cook it into your bolognese or con carne? Or even spread it finely beneath the cheese of your cheese on toast or welsh rarebit?

Much as it doesn’t smell like it, this sauce is, in fact, first ingredient sugar – It is a barbecue sauce. But that sugar is dark muscavado and, by the taste of it, its been cooked almost to the point of burning.

It’s sweet, yes, but it’s also black and molassesy in its taste, more than it is sugar, which means that it pairs beautifully with the dark, balsamic vinegar and the slightly sweet, yet oh so savoury, also somewhat balsamicky and anise-tinged flavour of the heat-aged garlic. Garlic that retains none of its aromatic pungency but keeps everything else about its original taste. Along with the darker notes that it’s picked up during the breakdown of its own sugars.

Add to that the slight umami of a browned tomato purée and maybe just a little hint of onion and there’s a tonne to take in before the reapers take their hold. But it’s those world record chillies, creeping in with their mellow, red pepper flavour and searing sour heat that make this a product to be reckoned with. And not just a crazy hot one but one where you can appreciate that flavour, as well.

The peppers build upon the tomato’s flavour and, while they don’t accentuate the richness that’s already there, their lighter tones do add a touch of levity to a sauce that could really use it. What with how intensely, single-mindedly dark it otherwise is.

Today’s product is a goodie and, while far from being an entry-level chilli item, it makes for a great look at what black garlic can do in a sauce. Which means that those who are already well-versed in extreme heat will find it an excellent, entry-level black garlic product. And anyone looking to just add heat and depth to their cooking will find that it goes into just about anything. Including brownies.

Because, surprising as it might sound, it’s only those pungent top-notes that keep garlic from working its way into chocolatey desserts. If you swap them out for a darker, richer, balsamicky base, the two become a perfect pair. And it really is those balsamicky base-notes that are the star of this sauce.

The Black Death is exactly what its name and art imply: A showcase of deadly reaper heat – Represented by its scythe-weilding, skeletal mascot – and the dark flavour of the black garlic – seen both in the black label and these bulbs around the bottle’s sides.

Then, to tie it all together, we see that main figure removing a plague mask – Clearly ineffectual, given their undead state, and far from historically accurate, yet still forever linked with the Black Death name throughout popular culture.

Generally, I prefer a bit more colour in my art but, for what Chilli of the Valley have made, here, black and white works perfectly and I can’t fault their artist’s work in the least. It does a fantastic job of cluing us into the two key ingredients, whilst working with the name that combines them.

But here’s the full list, for anyone left wanting a little more info:

And, while I did mention a touch of worcestershire sauce to its aroma, the Black Death is actually entirely vegetarian and vegan.

So, check it out if the rich, unique flavour of black garlic appeals to you or if you want something different with a reaper-level heat. And, if the second of those is what you’re after, you can also find a whole host of other products using the same pepper over on its encyclopedia page.

Just maybe don’t take your masks off, like the sauce’s mascot, just yet. We’re still in the middle of a pandemic, after all.

4 thoughts on “The Reaper’s Plague”