Okay, break’s over, people. Time to get right back into the weird stuff, with something mean and green.

Today’s sauce is Rampage – A kaiju-themed creation from Stephen Dixon, at Hot Pods, clad in a label oh so reminiscent of Godzilla, himself. The king of all japanese monster movies.

Yet, as specific as its referencing might be, you’re not going to need any knowledge of the genre to appreciate the blend of pears, peas and horseradish that makes this sauce unique.

That wild blend is something that we can all appreciate the enormity of. If it works.

Before I put it to the test, though, I’d like to take a brief look at Stephen’s Godzilla look-alike. The green T-rex with humanoid muscles which adorns the front of his bottle. Because, while it may be reminiscent of japan’s age old enemy from beneath the sea, it also packs in a fair few differences.

Its spines are spikes, not crystal shards, and go all the way to the tip of the tail. Its head is larger and more like that of a real dinosaur, rather than almost merging with its neck. It’s far greener than any current iteration of its famous counterpart. And there are pecs, on its chest, to support its more humanoid arms.

Arms that, it’s worth noting, seem much closer to King Kong’s, even mimicking his signature pose, fighting off helicopters atop the empire state building.

Why? Because Stephen had to work his peppers in somehow and the resulting pose is just right for a beast about to chow down on what it’s holding. While also providing a fun nod for fans of the iconic films.

It’s great art but what does it say for the sauce?

Well, it says that it’s green, it says that it’s beastly and it says that it’s destructive, with the burning city in the background. The yellow lighting on the monster adds a slightly earthy quality and the peppers are plain to see. But they’re also generic and, unless you know about both chillies and kaiju, you probably won’t pick up on the link between Godzilla’s nuclear breath and the fact that they’re superhots.

An unspecified blend of superhots, I might add, like we saw in the company’s 📽️Quarantine sauce📽️. Which suggests that they won’t play a major role in the product’s flavour. Though it’s probably time that I put that notion to the test. 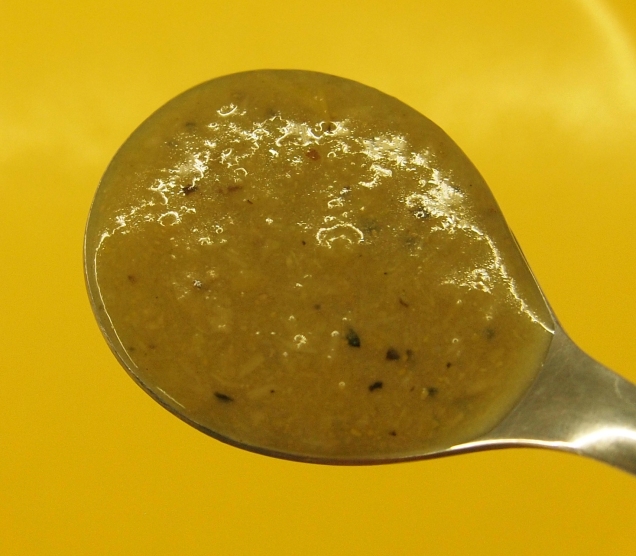 The aroma, as it pours, is a light, rooty tang with just a touch of that mustard-like, yet unmistakably horseradish pungency. But, despite that, the first thing to hit my tongue is sweetness. And a good deal of it.

The pear and peas come together in that first taste as a lightly-flavoured, green fruit mush with all the natural sweetness that’s normally present in both. Though it quickly turns out to be just the base on which something rather stronger builds.

Because yes, it may take a second or two but that horseradish on the nose definitely does come through in the taste. It comes through hard.

It tastes of earthy, not quite mustardy, cooked rhizome, with just a little extra zing from the onions and oaky body from the cider vinegar in the sauce. But it doesn’t come through quite the way that Stephen claims.

Its pungency has cooked down, perhaps, but it’s not cooked off. I can still, very clearly, feel the horseradish heat in his sauce, completely changing the way in which its chilli hits me – A

but not one that makes me cough, splutter or hiccup, no matter how much of it I eat. Because it doesn’t go for my throat or even my tongue.

This sauce goes exclusively for the back part of the roof of my mouth, where the base of my nasal passage lies. It feels like horseradish, through and through, yet it lingers like chilli and that sweet starting taste works oh so well to lead into it. Even if it all but disappears when the horseradish takes hold.

The Rampage might not be exactly what I was told to expect but, honestly, I think I prefer what I got. And its thin, yet pulpy, texture makes it all too easy for me to slather over meat, fish and potato-based dishes.

I’m sure that just about anyone can tell what today’s product was made for – A roast beef sarnie or a ham and pea soup – but I really do see it going just as well with chicken and chips or a fried fillet of white fish. And, if mustard mash is your thing, swapping out that seed-filled paste for some of this sauce will really take it to the next level.

I like this one a lot. It makes great use of its horseradish, in both heat and flavour, while toning down the harsher, more abrasive side of its taste with the natural greenery and sweetness of its fruit and veg. But it would be remiss of me to only mention that when, on other occasions, I’ve made note of how little the flavour of the chillies stood out in certain sauces.

According to its ingredients list, this sauce contains “mixed superhot chillies” but nothing more is said on the bottle. Well, except for everything else that goes into the sauce:

On the chilli-front, though, the label says very little and the taste tells me barely anything more. Aside from a distinct lack of green, implying that this is the same blend seen in the company’s 📽️Quarantine📽️, I’m getting nothing but heat out of them.

Which isn’t necessarily a bad thing. The flavour of the sauce works well, without any obvious pepper qualities, and focussing so heavily on a secondary source of spice makes it far more unique. You simply need to understand that this is a super hot sauce and a horseradish sauce rather more so than it is a chilli one.

If you’re okay with that then you can expect great things from Hot Pods’ Rampage. So go ahead, mix it into your mash, add it to soups and stews, pop it in your sarnies and slather it over fish and meat. Just remember not to chase the rabbit.