So, at the end of last week’s review, I promised you cayenne and I intend to deliver. Yet what you’re seeing, this week, might not be quite what you expected.

You see, Mahi have been pretty busy since we last saw them and they’ve brought out a whole new range of fruitier sauces. Everything from Tamarind & Mango to Reaper & Pineapple but the one that caught my eye was this:

Something on the milder side, yes, but still high enough up the scale to state its chilli Which is exactly what I’m into – Interesting pairings with specific pepper flavours. So let’s see how this one does, shall we?

Before I begin, though, I’d like to address the elephant in the room: No, this is not a seasonal sauce.

Cranberry is often considered a christmas flavour, true, due to how well it works with turkey. Yet sweet cranberry sauce also plays ever so nicely with things like sharp goats cheese and gooey mozzarella sticks – Foods that aren’t nearly as specific to the winter months.

And, as it turns out, this isn’t a traditional cranberry sauce, anyway. As the ingredients should make clear:

This is a sweet chilli sauce with cranberry in it. One that’s too ginger-free to be thai, yet still made in the same vein.

It’s not a christmas sauce, by any account, but, if I’m truly honest, I do wish I’d known about it back then. It would still have been nice to bring you something with cranberry in during the festive season.

Moving on, though, it’s time I gave this sauce a taste. Yet, before I’ve even had chance to fill my spoon I’m overwhelmed by the smell of vaguely fruity, vaguely woody vinegar.

Suddenly, I’m not in quite as much of a hurry.

But, while its aroma isn’t particularly enticing, the taste of this sauce is actively unpleasant. Very sweet and very vinegar forward, yet with an unexpected and slightly earthy tree-bark flavour coming out of Mahi’s chosen chillies. One which does not pair at all well with the soft berry notes from the fruit.

This Cayenne & Cranberry sauce fails to make its namesake ingredients work well together and only accentuates that sickly blend of sweet and savoury with the amount of sugar and garlic powder it uses.

The high vinegar content was to be expected, considering Mahi’s other sauces, and I don’t mind the slightly gummy texture that balancing it out with xanthan gum has imparted. I even like what the shreds and seeds add to my spoonful: 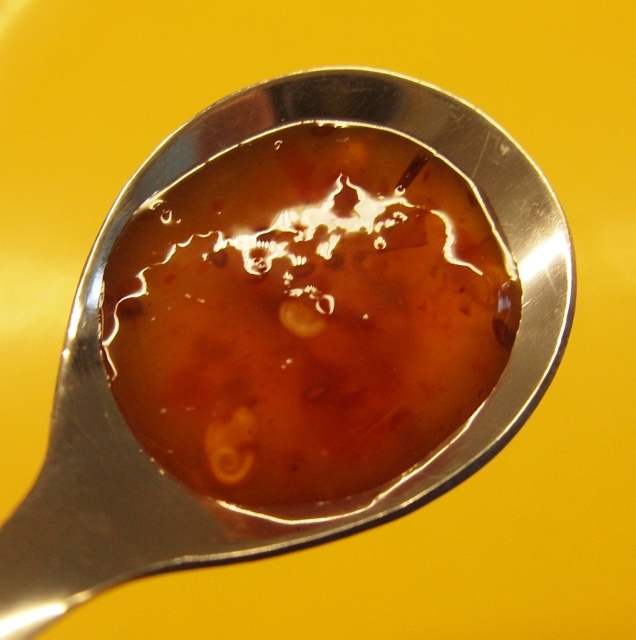 So it’s definitely not the worst sauce that I’ve tried but it is the worst thing that I’ve had from Mahi Fine Foods. Which is a shame, because I had high hopes for their fruitier range.

Especially with how good its new, floral label design looks and how well the reds and purples of this bottle’s colour scheme reflect its contents.

It even seems like there might be meant to be a nod to their pepper’s name in how the white, feathery petals in the middle of the design evoke thoughts of native american head-wear. A cheyenne headdress for a cayenne pepper.

Unfortunately, though, it’s just coincidence that the two sound alike. The cayenne actually comes from a completely unrelated tribe in brazil, who’s language is now considered extinct but once contained a word for “pepper” that morphed, over time, into the name we have today.

I do not know how that word was pronounced, since no spoken record of the language remains, but I can tell you more about the chilli that it’s used.

You can find more information on the red cayenne in today’s sauce by clicking that link to my encyclopedia page and more on Mahi’s sauces in this here company overview.

The only other thing to mention, right now, is the sauce’s mild

tingle, which I find neither adds to nor detracts from the otherwise lacklustre experience in any way.

I sadly cannot recommend this particular product but I’ve had enough from the company to know that they’re generally a lot better. Worth looking at if you’re in search of a good budget sauce.