How’s it going, everyone? We’re already entering into the second week of february and, while that holds little significance for me, the rest of the world seems to place a lot of importance on valentine’s day. So it seems like now is the perfect time to bring you a recipe that I’ve been planning for a while.

Something rich, smooth, chocolatey and decadent, yet not without a fair kick.

This, dear readers, is a Midnight Mischief mousse – The perfect way to blend Saucey Lady‘s fruitiest and second hottest sauce into a delicious dessert for two.

What it isn’t, however, is a totally new dish. It’s more of a tweak to the old mousse icing that I made for my chocolate moose cake. A darker version to pair better with Kaz’ berries.

Heck, you could even mix the two for some kind of blue forest gateaux but I’m going to keep it small, for now. This is, after all, only one of my mini recipes.

Here’s what you’ll need to make it: 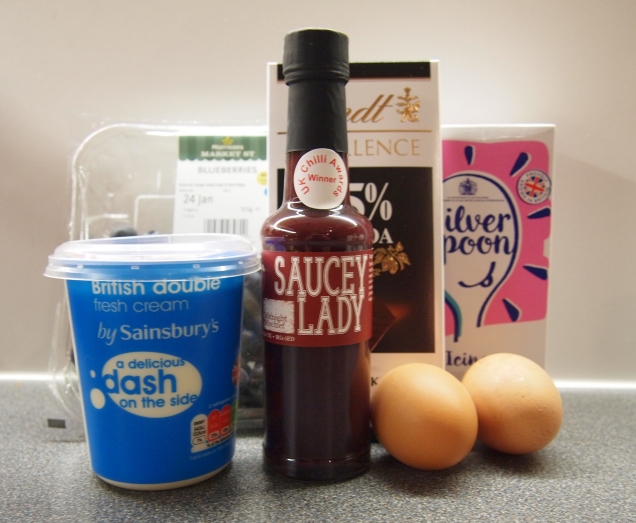 40g white sugar (preferably icing but caster will do)

And a small handful of fresh blueberries, just because.

Plus, while it’s technically not necessary, I still strongly recommend an electric whisk. The act of beating air into egg yolks until they can vaguely be called “fluffy” is not an easy one.

Here’s what they should look like when you’re done: 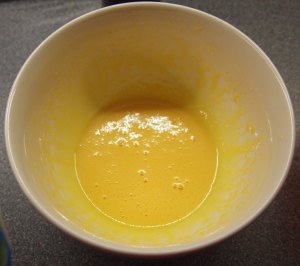 But, of course, you will have to separate them from the whites first. Which, I find, is most easily done by gently passing them back and forth between the halves of their shells and letting everything but the yolks, themselves, drip down into a bowl.

As long as you don’t pop them until you start whisking them, though, any method of separating out the yolks will suffice. You do you if there’s another one which you prefer.

Whatever your choice, make sure that you whisk them well and keep on whisking as you add the sugar. Then set the yolks aside to work on the cream.

Pour 200ml of it into a pan and warm it up over a low-ish heat, bringing it to a slight simmer. Then add half of it back into the egg yolk mix, stirring constantly to prevent a scrambled mess from occurring.

Next up, lower your flame to the absolute minimum and return the now egg-filled, warm cream to the pan, to mix back into its other half.

Give it about five minutes more at this temperature, continuing to both stir and scrape the sides, from time to time. Then it should start to noticeably thicken.

When the mixture does so, remove it from the heat (but not the pan) and let it sit for another five minutes, before breaking in the chocolate as finely as you can.

This wait wasn’t necessary before but then, at around twenty to thirty percent cocoa, milk chocolate is a lot less prone to splitting. Overheat the eighty percent stuff and all of the cocoa butter will float to the surface as oil. Which is pretty gross and renders the whole thing inedible.

Fortunately, though, the only thing you need to do to avoid such a fate is be patient and time things accurately. Even after five minutes, the residual warmth of the sweet and eggy cream is still easily enough to melt the chocolate. Which is the last step before we assemble the dessert.

Because, let’s face it, this mousse is already pretty perfect:

Thick, creamy, glossy and rich with chocolate, both visibly and to the taste.

It’s super smooth and definitely just as decadent as I’d intended, yet also a tiny bit bitter to take the edge off of its sweetness. A rather more sophisticated version than my last.

Though, despite that extra level of nuance, it’s still missing its fruit. So let’s get to layering.

Grab your preferred glass and a good sized serving spoon, then start dolloping it in, little by little. One heaped tablespoon of mousse, to start with, smoothed out and topped with a teaspoon and a half of the Midnight Mischief.

Spread the berry blend around with the back of your teaspoon, taking care not to upset the chocolate underneath, until the entire surface is covered. Then carefully apply a second layer of mousse, working your way in from the sides of the glass, so that they provide support. It’s a delicate procedure, so you might like to try refrigerating in between steps, in order to keep things firm.

When you’re done, add a second small layer of the remaining sauce, followed by a third of mousse, before finally topping with a few fresh blueberries, for decoration.

And there you have it, a blueberry, dark chocolate and chilli dessert that tastes delicious and goes down ever so smoothly, yet leaves behind a powerful

One that’s clearly been tempered by all of the dish’s dairy, yet still makes its scorpion pepper known, all the same. One that hits you gradually and hangs around in the back of the mouth, yet never seems to quite go for the throat.

It’s not something to give to anyone unsuspecting but, for true chilli-loving couples, I could see this being a real valentine’s treat. Assuming that you can track down Saucey Lady in time.

One thought on “A Mischievous Mousse”