Hey there fiery food fans, this week, I’d like to take a more thorough look at a couple of sauces that I’ve already mentioned. A pair from Bauce Brothers’ Hot 100 list: 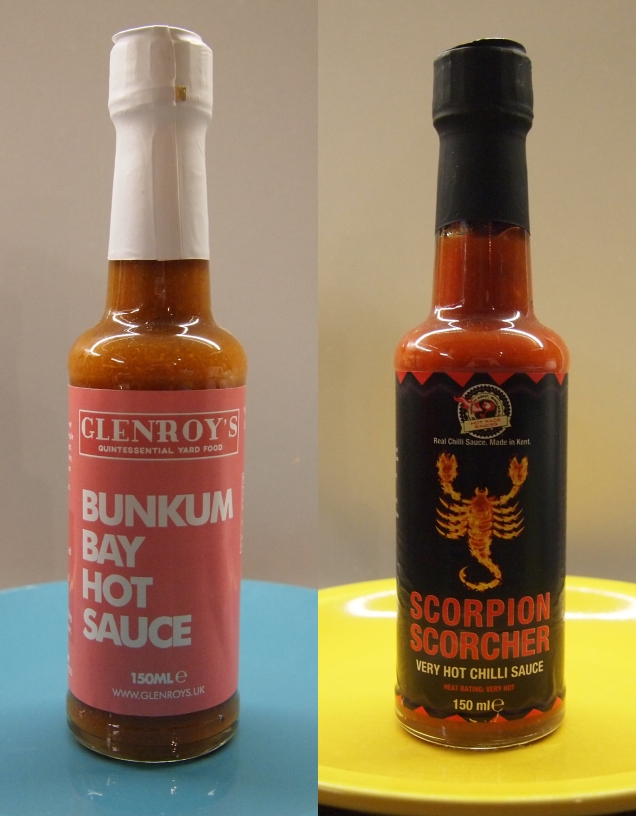 If you haven’t seen that list, go give it and my reaction post a look. Then come back here to read my full thoughts on Glenroy’s Bunkum Bay Hot Sauce and Hot Face’s Scorpion Scorcher.

Two sauces without much other connection.

The Bunkum Bay is a reddish-brown sauce, wrapped in pink and white, with no label imagery to speak of. While the red Scorpion Scorcher has gone for the obvious visual representation of its name and pepper – An actual scorpion, made of fire, upon a dark and sinister, black background. Subtle white glow helping its bold, red name to stand out.

It’s nothing as stunning or unique as the blue flame of 📽️ the company’s reaper sauce 📽️ but it gets the point across. It makes it pretty darn clear that this is intended to be the hotter of today’s pair. As well as what chilli goes into it.

Although, according to the ingredients list, the scorpion isn’t all that gives it heat:

Much as the Scorcher does use the official second hottest chilli in the world, it also brings scotch bonnets to the table. Which seems to be a recurring theme for Hot Face Sauces and Kent Chilli Shop.

And, as different as the sauces may be, Glenroy’s also lists that caribbean classic. This time as its only hot pepper:

A list that sets itself apart with its fruit and jerk spices.

Yet, while ginger, cinnamon, allspice (pimento), cloves and even paprika can be found in a lot of jerk blends, star anise is not. It’s Glenroy’s own addition and, while its licorice-like notes blend in with the rest of those spices, they still manage to bring the onions’ natural sweetness to the fore. A sweetness that is allowed to run free by the complete lack of any traditional jerk herbs.

It’s a very interesting choice, to mix up a classic like this, but it works ever so well for today’s pink-clad product. It plays upon the strengths of their onion-heavy and fruit-based blend, while also adding a tonne of vibrancy and an intense,

that feels as much like cinnamon and peppercorn as it does the scotch bonnet. Getting tingly all over my tongue, before burning the back of my throat.

In flavour terms, those spices lend a rather woody finish to the sauce but it’s what comes before that that really grabs my taste buds. The gentle, slightly bonnety, tomato flavour that comes first, followed by the bold blend of fruity tang, natural sweetness and strongly spiced onions.

Simply put, Bunkum Bay is far more of a full-on, layered experience than the watery appearance and two allspice shards seen on my spoon would suggest. 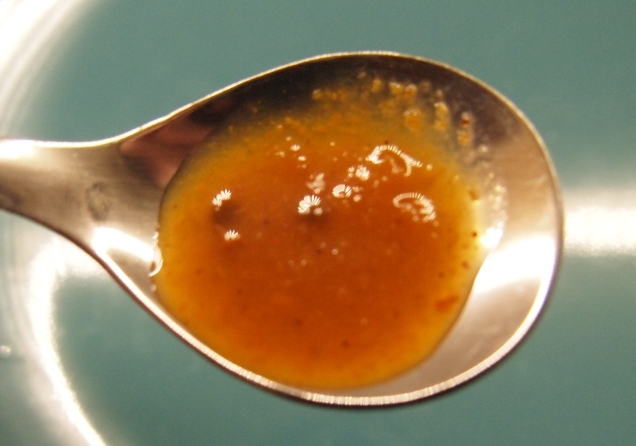 There’s so much more beneath the surface – Both metaphorically and literally.

Glenroy’s Bunkum Bay is a fantastic sauce that lends itself wonderfully to use on gingery chinese dishes, duck and chicken. As well as really enhancing my enchiladas and cheesy pies with its well-spiced, scotch bonnet tang.

But how does our scotch bonnet and scorpion blend compare?

Well, it’s certainly a lot more visibly thick and pulpy. Redder, too. Yet it lacks any seeds that aren’t from chillies.

We’ve gone from intensely spiced to utterly spice-less. Though it’s still seriously spicy – Coming in at the low end of a whopping

It’s a slow burn but also sharp and acidic, leaving my tongue a-throbbing. But it’s the flavour that I’m not so fond of.

The richness of the scotch bonnet is enjoyable, certainly, but it’s more subtle in this product than in the the rest of Kent Chilli Shop’s Hot Face line. And its at odds with that acidity that I mentioned above.

When combined with the slightly bitter, slightly floral, pungent properties of the moruga scorpion – Really highlighted in this sauce, by the way – that acidity isn’t very pleasant. And, while I can hide it in a bolognese, con carne or strong, red curry, it still severely lessens my enjoyment of the scorcher in every other setting.

It’s not terrible but the Scorpion Scorcher is definitely not on par with Glenroy’s creation, the rest of Kent Chilli Shop’s handiwork or most of the other items on the Hot 100 list. I don’t like it and I wouldn’t recommend it.

Unlike their 📽️ Reaper Extreme 📽️ or today’s other item, the Bunkum Bay Hot Sauce. Those two are well worth a try and pack both a more enjoyable and a more nuanced flavour.

They are, quite simply, better sauces.