Happy tuesday again, everyone! Today, I’d like to show you another import sauce, brought into the country by my good friend Russell, of Grim Reaper Foods.

We talked about his import business, some time ago, back when I had a look at Crazy B🔥stard’s range. He grabs some great german sauces but this one’s different. It’s dutch. 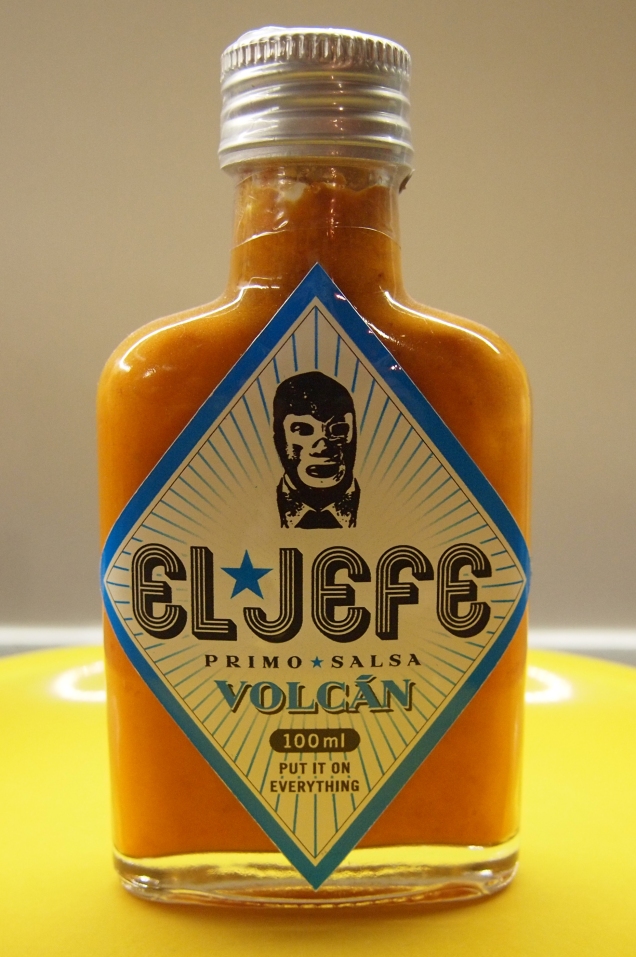 El Jefe, based in amsterdam, are a mexican-themed brand with the usual three colours – Mild green, medium red and hot orange. Yet, unlike most actual mexican brands, the pepper in their orange “Volcán” isn’t habanero. It’s a close relative known as the “suriname yellow”.

Or, more colloquially, the “madame jeanette” – In reference to one of brazil’s most infamous hotties.

The official rating of this pepper puts it at around the same heat as an average hab but its flavour and the way in which it hits are said to be quite different. I look forward to trying it.

Before I can begin, though, it’s customary for me to go over the label. One that, unlike that of any UK brand that I know, is diamond shaped.

It’s quite an oddity, since I can only remember seeing this style on Tabasco before, yet it fits their hip-flask bottle perfectly and its blue outline contrasts equally fantastically with the near-neon orange of the contents.

Unfortunately, though, the imagery on that label isn’t nearly as good. It’s just a black and white bust of a mexican wrestler and some very line-filled text. It needs to do more to sell what’s inside, if you ask me.

I’m sure you all know that I like action lines by now but they still don’t make up for poor design. Only one thing does that and it’s top notch flavour. Let’s see if Volcán has what it takes:

Outside of the bottle, El Jefe’s sauce is even more vibrant than before and rather thinner than I was expecting – Easy to pour, yet still a fair way away from watery.

Its opacity seems to come not from thickness but from creaminess. Or, to put it another way, from emulsified sunflower oil.

It feels, on the tongue, like a cream of tomato soup, with added chunks of mildly bitter red chilli. Which is, indeed, the main body of its flavour.

Yet there’s also something else – A second chilli flavour that’s far less ordinary.

The madame jeanette shines through in every mouthful with a dry, aromatic, almost musty flavour that reminds me less of a yellow pepper and more of mustard. And, while the initial kick of the Volcán is a sharp yet small, bird’s eye-like sting, it soon gives way to a similarly aromatic, dry heat on the low end of my

It’s enough of an all over intensity to match a first ingredient habanero product but the sensation is quite different and this chilli is clearly hotter, because it isn’t first on today’s list. In fact, it’s four items down:

Or, if you want the proper wording from the bottle:

Grim Reaper Foods’ translation is of great use, since my dutch is not on par with my german, but it also misses out the all important comma between the named and generic chillies. It’s not just one pepper in today’s sauce and the two different heats make that quite clear in my mouth.

But what about the fruit?

Honestly, it just adds a small tang. This sauce isn’t fruity, as is, and it isn’t fruity when stirred into my stews. Yet, for some reason, it is very much so over macaroni cheese. Which doesn’t quite work for me.

El Jefe’s Volcán is a weird one and, while it does go well both over roast beef and stirred into a wide variety of soups and stews, I’m not really that fond of it.

Its cooked tomato flavour is quite similar to the one that I initially disliked in East Coast Chilli Co.‘s ”Chance” but, whilst that creamy sauce grew on me tremendously, the unusual taste of the madame jeanette chilli really isn’t doing so.

I’m very grateful to Grim Reaper Foods for importing the Volcán and giving me a chance to try such a storied, yet difficult to get hold of pepper in a sauce but I’d still recommend the other Chance over it. Unless you’re also dead set on sampling this suriname chilli, that is.