It’s another tuesday, everybody, and time for the first of my freebies from Saucey Lady. Four of her standard-sized sauce bottles that I chose but wasn’t charged for, on the grounds that it was christmas.

Of the sauces that I chose, only two are new, but you’ll be seeing the lot, anyway, as the other feature in recipes and an upcoming video.

For now, though, I’d like to talk about this one:

Her St Clements, named in reference to the classic schoolyard rhyme and her inclusion of both oranges and lemons. Fruit that, when combined with the product’s aji limon chillies and yellow bell peppers, give it a warm and vibrant yellow unlike anything else in her range.

Despite having the exact same label as all of her others, this sauce stands out as a real looker. And its UK Chilli Awards sticker bodes well, too.

But can it live up to those impressive first impressions? Well why don’t we find out?

Upon tearing through the heat shrink and cracking open the bottle, I’m greeted by the healthy thunk of inrushing air and then something quite unexpected. A fresh, green, vegetable aroma, at least as powerful as the zesty citrus, really shocks and confounds me.

Sure, those greener notes exist in most baccatum-type chillies but I’ve never known them to dominate a sauce before. And looking at the ingredients list provides no clues as to how they’ve done it.

None of those would explain why that green note is so prominent here but, as it turns out, none of them have to. Because it’s far more subtle on the tongue. 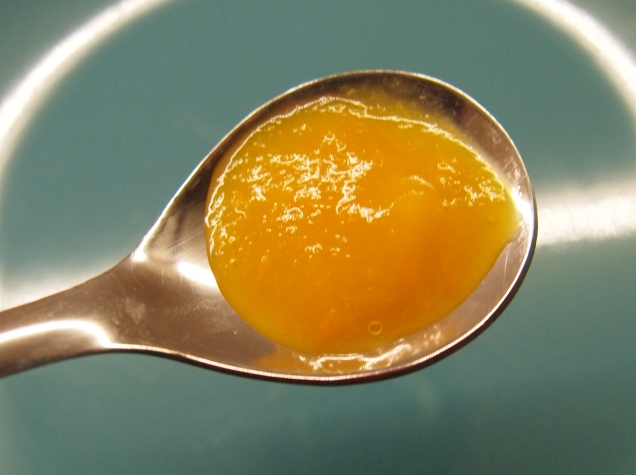 I don’t know why that baccatum vegetable quality is so obvious on the nose but, when the thick, pulpy sauce finally passes through my lips, it’s the orange pulp that takes the fore, while the other qualities of those chillies – The more lemon-like ones – give the product its body.

This isn’t really a sauce with a big vegetable taste but that fresh undertone is still going to help it pair with steamed sugarsnap peas or tenderstem broccoli.

Or, for more of a meal, why not try it with such veg in a stir-fry, where its lemony base can bring out the best in rice and those top notes of orange will compliment both chinese cooking’s use of ginger and any duck or chicken that you might choose to include?

Heck, you could even cut out the middle man and add it straight to fried poultry for a unique take on orange chicken. Or use it as a dip for spring rolls.

It’s also going to go well with fish, like any citrus sauce, but this one’s definitely one with a difference. One with less acidity than most and less of a burn than many, at only a

Yet it does not lack in pepper or in brightness of flavour and, while other sauces might be sweeter, few carry quite such obvious fruit pulp.

I was informed, before my attempted purchase, that this product was made in response to customer feedback on Kaz’ others – To people saying that they loved the fruity and pepper-heavy flavours of the Saucey Lady line but that they wanted the option for less heat.

If that’s the case then St. Clements ticks every box because, despite being at least as heavy on the peppers as Birds & Bonnets and the Fireman’s Watch, it only hits the high end of my blog’s “mild” heat and it still lets its oranges shine, too.

For those who can handle a bit more of a kick, I’d still say that her Birds & Bonnets is my favourite but today’s is a darn good option for those wanting something milder or a unique take on the lemondrop chilli.

3 thoughts on “A Citrus Surprise”