Hey there everybody, it’s thursday again and time for me to review another freebie from Heat Hot Sauce. A sauce shop situated outside of the UK – Hence it not fitting into my usual tuesday feature – but one with far better international shipping than some and a wide selection of interesting sauces at reasonable prices.

Today’s item was apparently made with them in mind but its actual producer is a company called “Spicy Ninja Sauce”, based in Hawai’i.

So, given their island home and the fertility of volcanic soil, it’s only natural that it contains tropical fruit. Yet we’re not looking at anything as ordinary as mango, papaya, pineapple, coconut or even lilikoi – A local breed of yellow passion-fruit used in some of their sauces.

No, their weapon of choice, for this one, is something that I’ve only ever seen once before, on import from germany. It’s the legendary star fruit, or carambola, which almost everyone has heard of but few have ever tasted. A fruit that apparently blends hints of grape, citrus, pear and cantaloupe melon.

My history with the carambola has it pegged a little differently, though – As a blend of pineapple, unripe lemon and cucumber that was absolutely disgusting when skewered and chocolate-coated. Yet I’m pretty sure that I didn’t have it at its best.

After all, my fruit was green and Spicy Ninja’s sauce is anything but: 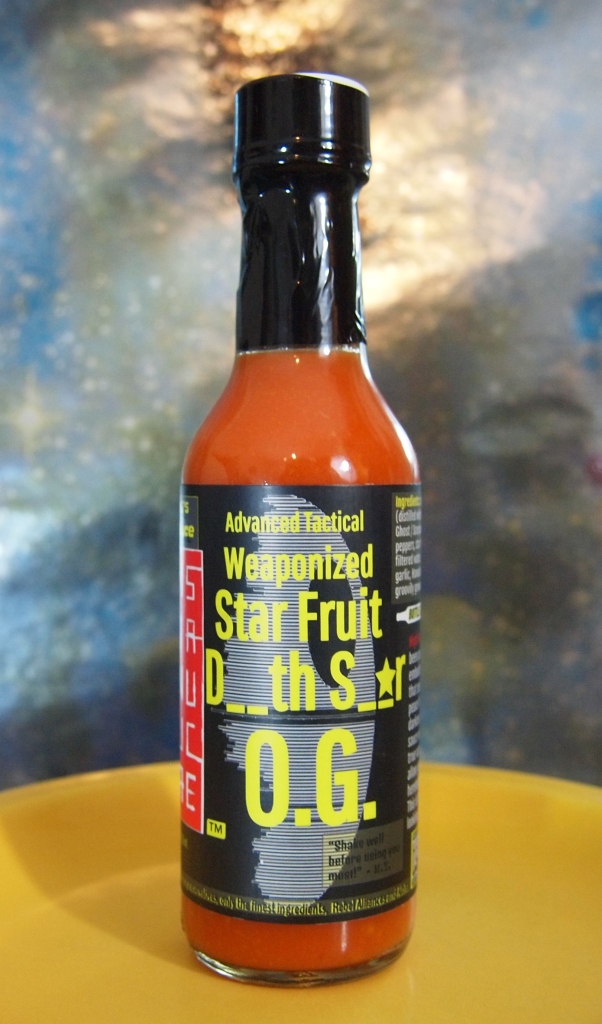 It’s a bright orange blend of carrots, star fruit and ghost pepper, themed after the Death Star. And, while it’s purely coincidence that this product caught my attention right now, I definitely appreciate Heat Hot Sauce getting it to me in time for The Rise of Skywalker.

I could not have asked for a better time to show off the D_ _ th S_ ★r O.G. “Weaponized Star Fruit” sauce than alongside the release of Star Wars episode nine!

Spicy Ninja really play up that movie connection, too, sandwiching the bottle’s inch-wide glimpse of vibrant orange between bold, imperial black heat shrink and label. A label on which greenish-yellow text highlights the colour of the fruit, while shrinking away towards the top in that classic Lucasfilm style. And that’s before you even see the lit side of the franchise’s actual false-moon, plain as day in its background.

There’s even talk of invigorating, force-awakening properties around the sides so, despite blanking out the name, they definitely aren’t trying to hide their inspiration.

In my mind, the branding here is masterful and I’d be willing to bet anything that fans will buy it just for that. But is it worth the import for sauce-lovers? Will those who are a tad less crazy for science fantasy be on board with its taste?

It all comes down to what its unique ingredient brings and I can think of only one way to find out: 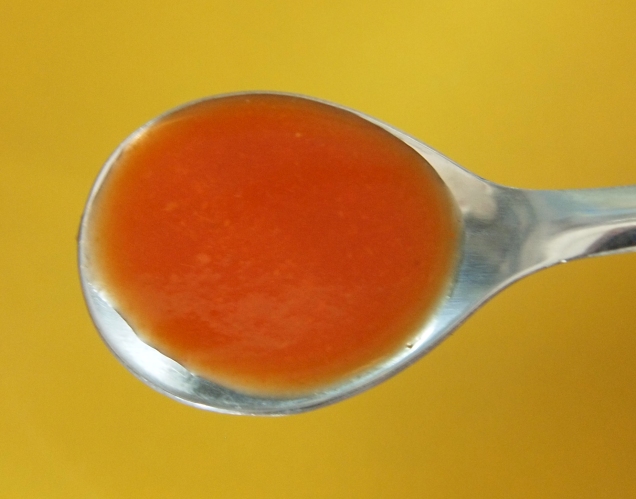 But actually, I don’t have to eat this sauce to know how prominent that star fruit is. A single sniff will do the job because, well, there’s a nice blend of carrots and red peppers in there somewhere but it’s definitely subtle, compared to the citrus-like overtones. And its almost watery consistency also implies a lot of juice.

The carambola, to use its proper name again, is very much the star of the show – Fittingly – though not quite the one that I expected.

It isn’t green, in any sense, and nor is it “warm”, like yuzu. It’s quite close to lemon, yet it doesn’t smell acidic and, when I do come to taste it, it isn’t bitter, like the zest. What it reminds me of most, in fact, is the extract of lemon oil that CaJohn’s used in their Hydra, oh so long ago.

Only, this juice is stronger than the Hydra’s essential oil and it doesn’t become unpleasantly fake and cloying, as I carry on eating the sauce. It dominates the D_ _ th S_ ★r O.G.’s flavour, just like it did the aroma, but this time around, that’s not a bad thing.

Not only does it not ruin the sauce, it utterly makes it!

It makes it one that’ll pair with white fish and chicken. One that’ll go beautifully with rosemary, over roast meats, potatoes and flat breads. And one that’ll really liven up a red ramen or pho. Yet where I love it the absolute most is soaked into the rice of some egg nigiri.

This sauce blends beautiful, non-acidic and not-quite-lemon top notes with a gentle base of mellow scorpion and ghost peppers. Providing a serious hit of bright flavour, before its

takes hold, around the back and sides of my mouth.

It’s strong, for sure, but not just in terms of the burn, meaning that you won’t need a tonne to appreciate what makes it special. Just a teaspoon to marinade or a few drops in a bowl, to offset the richness of a meat or mushroom broth. And, if you do decide to go the sushi route, why not blend it with a dash of mirin and rice wine vinegar, to lightly marinade the rice, yourself?

The ingredients list isn’t complicated, here, but the D_ _ th S_ ★r O.G. Really makes the most out of everything that goes into it, while putting its star in the spotlight for flavour. It contains:

The last of which, I’m pretty sure, is not a physical thing.

And, while the fact that it pairs so well with japanese food surprises me, it really shouldn’t. Hawai’i is, after all, the second home of sushi and fish has long been known to work with citrus. Both the origin of today’s sauce and the tasting notes given for its signature fruit should have clued me in on the sushi usage from the start.

Yet I’d clearly never had a ripe star fruit before and the green version that I had tried tasted a lot different. My expectations were, as a result, more than a little muddled.

So, once again, I’m going to say “Thank you very much!” to Heat Hot Sauce, for sending me this bottle and also to Spicy Ninja Sauce for filling it with something utterly delightful. The two of you have set me straight on a wonderful, tropical ingredient that, as it turns out, really deserves more attention than it gets.

To the fruit-lovers among you, I say “Give the carambola a go, if you can.”. Just make sure that it’s ripe and yellow.

To the heat freaks who like the high end of the scale, “This one’s something special!”. Not the hottest, perhaps, but still seriously strong and full of flavour. Well worth picking up, state-side, and definitely one of the more temping items to import, if you’re UK-based, like me.

And, to the Star Wars fans, “Enjoy your new film.”. And “May the sauce be with you.”. Whether it be today’s or one from a long time ago.

2 thoughts on “The Death Star”