Happy tuesday everyone, this week, I’m wanting to look at some ginger chilli sauces. Three rather different ones, all with a bit of asian inspiration and all from companies that we know well:

To start, we have The Upton Cheyney Chilli Company’s Roast Garlic & Ginger. A dark brown, almost black sauce from the makers of both Megalodon and a great Red Habanero, Mango & Lime concoction.

They’ve been pestering me to try today’s for quite a while but, before I do, allow me to at least introduce the others that are going to feature alongside it. We have:

And, from the Queen Majesty, who brought us the sophisticated yet unapologetic Red Habanero & Black Coffee, a simple Scotch Bonnet and Ginger number that I’m sure will be a lot less ordinary than its name implies.

Three solid makers and three equally solid-sounding flavours but how will they hold up in today’s comparison review?

Upton Cheyney’s offering, being the most requested and longest time coming, is the one that I’ll start with. Highly dark in both sauce and packaging, with a matt finish to its label and metallic highlights to really make it look special.

At first glance, those highlights make it a little hard to work out what’s going on with the imagery but that issue soon resolves itself and I come to realise that it’s not a pile of gold and silver sitting front and centre. It’s ginger and garlic. The product’s key flavours.

And, indeed, those are what I get most from it. Rich, dark, garlic, cooked to the point where all of its sugars have caramelised and gone black, with a definite tingle of golden ginger underneath. There’s a touch of red chilli – A naga variety – But it’s very subtle and pretty much unnoticeable over food.

Flavour-wise, this is more of an asian barbecue sauce than a chilli-based condiment, but it does pose a decent

It’s on the boundary between medium and hot, not even close to ghost-level, so I can totally see why they’re subtle about using dorset nagas on the front. Their UK chillies are a matter of pride, it seems from the blurb, but they use so little that it’s not worth scaring off those who aren’t superhot fans by putting it on the face of the bottle.

Our second sauce, however, doesn’t mention its pepper type at all. Despite their more fiery branding, Hot Face Sauces simply call their Ginger & Garlic a “medium chilli sauce” and list it as three percent “Chillies”.

I’m not a huge fan of that but, honestly, they are a pretty generic strain, whatever they may be.

When I give the sauce a go, it does taste of red chilli, softened by the addition of carrot and onion, but it doesn’t taste of any specific chilli that I’m aware of. In fact, the main flavour here is actually the sweetened ginger, with any garlic notes fading into the background behind that and the chilli.

It’s a much more simple sauce than Upton Cheyney’s – And rather more pulpy in texture – but it’s still a great addition to my stir-frys and jollof. And it’s just a tiny bit more accessible, with its low

Perhaps not my favourite of the Hot Face line-up but that’s comparing it to some absolutely astounding competition. I still enjoy it, all the same.

So, speaking of line-ups, let’s move on to our third sauce of the day, before I make my final verdict. The one from Queen Majesty, imported from america, where it featured as the fourth sauce on Hot Ones‘ fourth season.

As the first yellow sauce of the day, this one looks to boast a lot more ginger than the other two and its colour really stands out against the pearlised white of its label.

Yet, while the art of that label does differ quite a lot from the company’s habanero & coffee sauce, the yellows and oranges of its flowers and leopard seem to be the only connection to the contents. The change to the surrounding plants does not seem to go along with a similar change in herbs and spices at all. 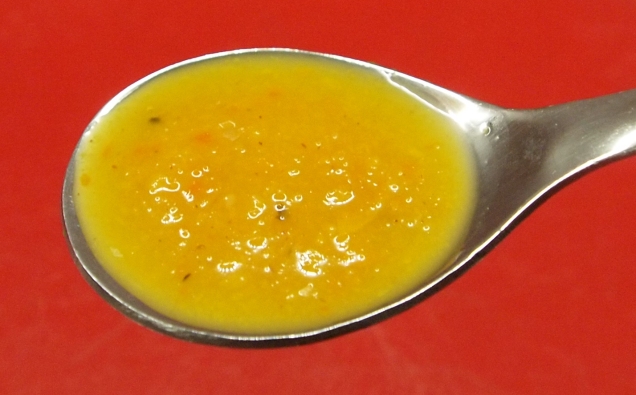 It’s tangy, citrussy and hot, reaching the upper limits of what I’d call a

with a sharp tongue burn. Pulpier than their previous sauce and far less liquid than Upton Cheyney’s, yet also much thinner than Hot Face’s sweeter ginger sauce.

This one, unlike today’s english pair, is entirely savoury and, while the shreds of pepper in it look red, they definitely don’t taste it.

It’s a complex, ginger-heavy, yellow pepper sauce with some clear onion overtones. Great for chicken, white fish and, in particular, over sushi. But I don’t see myself doing much else with it as none of Queen Majesty’s own recommendations sound that enticing.

I’d much rather have the usable simplicity of Hot Face’s stir-fry and pork-ready ginger number or Upton Cheyney’s soup, stew and ramen-enhancing, rich, dark, not-quite-bittered garlic product, that really livened up my nuggets and fried noodles, too.

In fact, much as I don’t like saying that one product is better than another when they do different things, The Upton Cheyney Chilli Company’s Roast Garlic & Ginger Chilli Sauce was definitely the most versatile and enjoyable of today’s trio, for me, and I may well be needing another bottle quite soon.