And yes, I’m posting on sunday, as well, everyone. I’m keeping busy this week.

For this particular recipe, though, it’s not just me that you have to thank. Its inspiration comes from Hot Ones and my own comments section.

You see, just over a week ago, I was watching Kristen Stuart eat wings and, despite putting on a good performance, I didn’t feel like I could relate to her like other guests. Until, that is, she hit wing seven and the big food question dropped.

As it turns out, Kristen is a forager. And not a ramson, elderflower and bilberry forager, like me. She forages for loquats.

Now, if you’ve read my review of Ibiza Chilli Co’s Magnificent 7, you’ll know that I’ve got a lot of love for the citrussy, slightly mango and apricot-like, loquat. So, naturally, I got excited to try her crumble.

Unfortunately, though, loquat season ended several months ago. I couldn’t get the fruit fresh and nowhere sells it dried or frozen. All I could get my hands on was another bottle of that glorious spanish hot sauce, with which to try out Glempsto’s crazy-sounding loquat drizzle cake suggestion.

Now, I took a few liberties with the recipe, as you’ll see in a moment. I wanted to highlight the fruit’s citrus qualities and the sauce’s spices, not just replicate a lemon drizzle. And, while I wasn’t sure quite what to expect, I absolutely adore the resulting sweet and tangy cupcakes.

They’re soft and spongy, with an icing that turns almost jam-like when they cool. There’s a lot of lemon zest to them, upfront, yet they’re not bitter and their dairy content keeps the flavour smooth. Then the cinnamon comes in, a little subtle beneath the loquat topping, and provides that warming, autumn spice that the fruit cries out for.

They’ve exceeded my expectations in every area but one: Heat.

If you’re looking for a chilli kick, the almost imperceivable

that the sweetened sauce becomes is certain to disappoint but, as I try to make clear on a regular basis, I’m not all about the spiciness. Sometimes I just want delicious spice flavours that I can share with the world.

Today’s recipe may be incredibly mild but it’s packed full of warming spices, bright citrus and a delightfully exotic fruit topping. If you’re here to appreciate flavour and not just fire, I really think you’re going to love it.

Here’s what it takes to make:

So, let’s get started, shall we?

To begin with, mix the butter and castor sugar in a bowl until light, fluffy and thoroughly combined. As always, I like to do this with a fork but your choice of implement is up to you. Just consider letting the butter reach room temperature first, so that it softens up, if you’re having trouble.

Once that’s done, beat in your egg and do your best to break up any lumps. We want a smooth batter, if at all possible.

Next, the dry ingredients – Flour, baking powder, cinnamon and lemon zest – can all work their way in, alongside half of our lemon’s juice. Only half, though, as there’s a limit to how sour we want our buns.

And then, the final ingredient, the milk goes in.

Now, you might notice that this recipe has been taking cues from my old, mock-buttermilk-based, chipotle chocolate cupcakes. Yet I’m not adding the lemon and milk at the same time this time. Why?

Well, in that recipe, I used only a teaspoon of lemon to get just the beginnings of a sour milk texture. In today’s, however, I’m using more than three times the amount and the milk would curdle much faster. So, instead of giving it time to rest and do its thing, I’m mixing up my batter for baking as fast as I can to minimise the time that they’re together uncooked.

And then I’m separating it between twelve bun cases to bake in the oven at 180°C for twenty minutes. 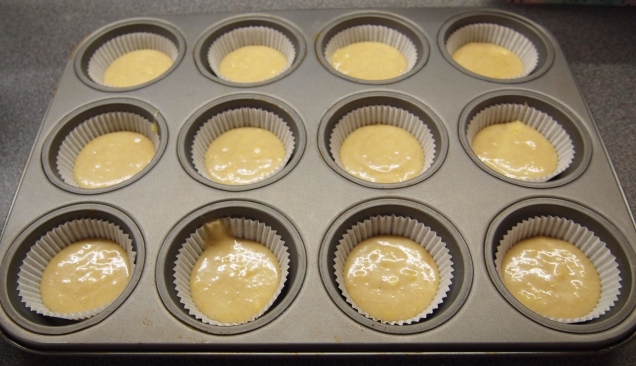 Or until they start to brown at the edges.

While we’re waiting for that, though, let’s make some icing:

This stuff is super simple. The Ibiza Chilli Co’s sauce is already so full of flavour that there’s no need for us to add anything but icing sugar to it. And I’ve already given you the ratio in the ingredients.

Simply whisk well to remove any clumps and you should have a thick, yet still runny, smooth, loquat (or nispero, to use their term) icing with warm spiced notes and just a hint of lemon. A perfect sweet yet tangy topping for the finished cupcakes:

Which will thicken up to a jam-like consistency as they cool.