Happy halloween, my fellow heat freaks. It’s trick or treat time and I’m really hoping that today’s seasonal special is the treat that I was promised.

This “cauldron” sauce has come to me, quite last minute, from the lovely folk of Brighton Hot Stuff. Too late to make my usual tuesday timeslot. Yet the company’s previous products have earnt my respect through their flavour and I’m willing to fit them in, where I can, with that rare thursday review.

There is, however, a nagging voice in the back of my mind which can’t be ignored. One that’s more sceptical of this sudden freebie, thinking “This would be the perfect time for a company to prank you with another Hell Unleashed.”. And it’s not just BHS’ work, either. It’s a collaboration with a company who I can find very little about online. One by the name of Lazy Scientist.

So, while it’s likely no more than my own paranoia, I’m going to be taking things a touch more cautiously with today’s review.

It doesn’t look like anything evil. Its brown paper labelling is the same as we saw on Brighton Hot Stuff’s earlier work. Just with two company names instead of one, this time, and one of their three Xs swapped out for a heated round bottom flask. Presumably the logo for Lazy Scientist.

That simple labelling and the sheer brightness of the sauce itself – Visible even through the bottle – are very reassuring signs. As is the lack of extract listed in its ingredients:

But, that said, we’ve seen such lists lie to us before and there’s nothing stopping them from doing so again.

No, the only way to know, with absolute certainty, if the guys behind this sauce are evil, is to try it:

Well that’s suspicious. No dropper cap means that either they’ve taken my previous complaints to heart or they want me to use a lot of this one. Which I’m not going to do right now. 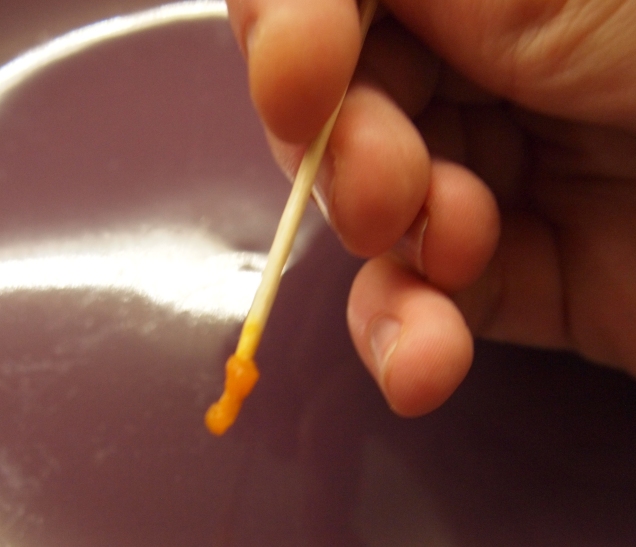 Now that I’ve got it on my cocktail stick, though, I think that there might be a third reason. Judging by the way that it clings to the wood, I think the Cauldron might simply be too pulpy to make it through their usual nozzles. And the scent coming off it isn’t too intense but it’s enough to tell us what that pulp is.

This is a pumpkin-based hot sauce. One with the unmistakable aroma of that autumnal, orange squash. And it tastes like it smells, too. Albeit with a few other flavours in the mix, that I need more sauce to truly put my finger on. 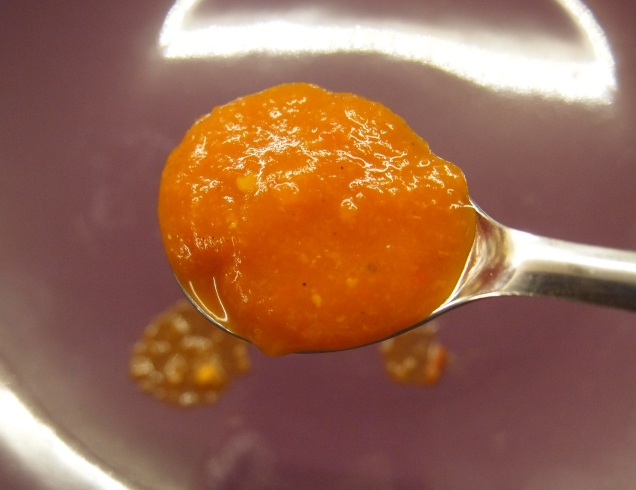 Even then, the onion and garlic are not immediately obvious, though they are there. Along with an acidity that comes across as more tart than tangy, possibly because there’s more than just cider vinegar to it this time. They’ve added orange juice and I can definitely tell.

Yet I can’t pick out any of the specific peppers that they’re using. The fermented mash that the Lazy Scientist have provided blends too well into the pumpkin, itself, and I’m only getting subtle hints of red chilli from it.

The one variety that I do taste is the yellow trinidad scorpion, which I’m pretty sure isn’t actually in this sauce. It’s probably just the result of everything else masking the scorpion’s red notes, while the acidity and onions bring out its sharper side.

Regardless, it’s a good blend and it’s finished off with just a touch of autumn spices and a slightly bolder, almost herbal element that I can’t quite place.

It’s going to go with pumpkin dishes, obviously, but also sweet potato ones and I’d definitely add it to my stew on the days when I want some serious spice.

Because, at a whopping

even if it does take a moment to creep in, the Cauldron is anything but mild. Its scorpion-heavy superhot blend is oh so recognisable in the sharp, tongue and throat-heavy burn.

It’s crazy strong but it’s not beyond nature, like I was afraid it might be, and I’m pleased by that. I do prefer a natural heat and flavour and the flavour on this sauce is a whole load better than 📽️ the last pumpkin one 📽️.

Plus, while I haven’t given a lot of recommendations for its usage, that’s not to say that it won’t pair well with a tonne of foods. It’s more indicative of its unique taste and the lack of time that I’ve had to experiment with it.

It’s going to go with far more meat and roast vegetable dishes than I’ve mentioned, I just can’t quite put my fingers on which. Though I think, with an acidity similar to Cornish Chilli Co’s Red Snapper, pub grub might be a good place to start.

So, if pumpkin and superhot chillies are your thing, this sauce is definitely worth getting your hands on, while you still can, and I’m very glad that I got to try it.

My worries appear to have been entirely unfounded and so I’ve put a link to the company in my sidebar, now, so that you can find their website with ease.

5 thoughts on “Trick or Trinidad?”