Sup peeps. Earlier this week, we looked at some szechuan-style peanuts from Brighton Hot Stuff that I highly recommended using in a stir-fry.

I stand by that recommendation but, today, I’m going to add a caveat. They went really well into both noodle and rice-based stir-fries and they’d be just as good in a veg-heavy one but there’s a lesser known type of traditional stir-fry that I don’t see them working in. Potato Stir-fry.

Yep, you read that right. There’s a real chinese dish where they slice potatoes into ultra-fine strips and cook them like noodles. Albeit a touch more al denté.

I’m not going to lie, it’s super weird the first time you try it. It’s completely unlike any western form of spud. Yet keep going, for a few mouthfuls, and you’ll soon come to love it.

I discovered this dish at Xi’an Impressions, in london, on route to Challock Chilli Fest. I picked up a taste for it there that turned into a craving, during my recent brighton trip, but, unfortunately, I never made it back.

Instead, I’ve had to learn to cook shredded potato stir-fry myself. And now I’m going to teach you. 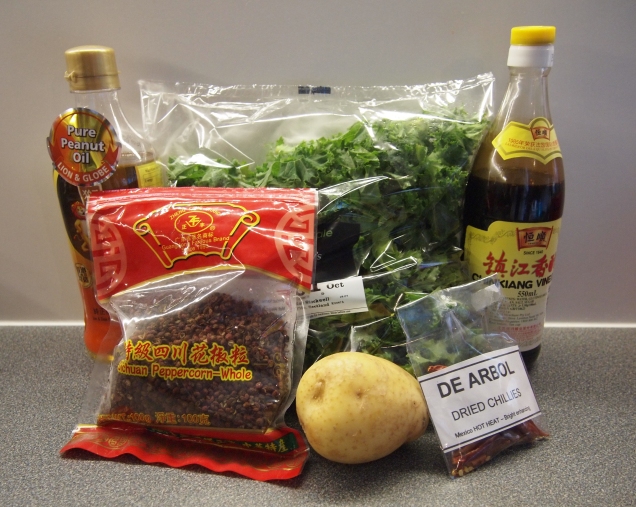 And a good-sized handful of shredded kale. For which similar leaves, like spring or collared greens, can be substituted, should you prefer.

In fact, only the peppercorns and potato are mandatory ingredients in today’s dish. A spirit or clear rice wine vinegar with a dash of soy sauce won’t taste exactly like the less umami-laden chinkiang variety but it will provide a similar, dark and tart quality. Just as vegetable oil with a teaspoon of sesame won’t provide the earthier, fuller body of the groundnut oil but it’ll still be just as rich and nutty. Ideal for those of you with peanut allergies.

Plus, de arbol peppers aren’t traditional to begin with. I like their slightly earthier, nuttier flavour more than what supermarkets call “chinese dried long” but most recipes will call for that more asian variety.

So, while I honestly believe that the recipe tastes better with the ingredients that I’ve listed, you’re completely free to change things up according to your own tastes and what you can get hold of. It’s the method that’s important.

To begin, fill a soup bowl most of the way up with fresh, unsalted water and begin skinning your potato.

Slice it in half, for ease of cutting, and then make the rest of your slices about three millimetres thick. Continue cutting along the length of each slice and you should end up with strips like mine: 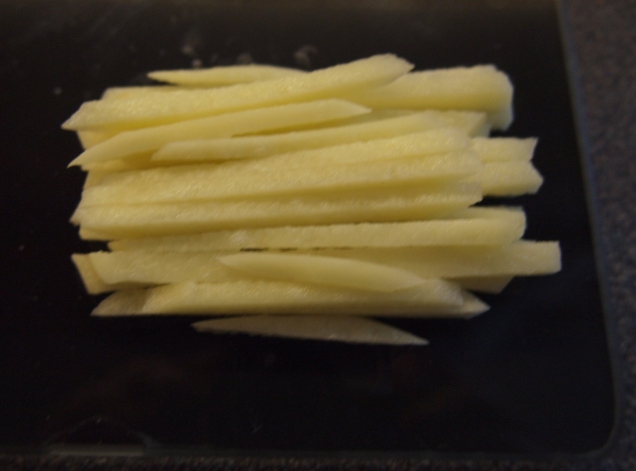 Strips that want to go straight in the water so that the starches soak out of them. That’s how we keep them firm and prevent them from clumping in the pan. It’s why we don’t add any salt, so that there’s as much room for starch to dissolve as possible.

Now set that bowl sliced potato aside, for the time being. It needs at least ten minutes to do its thing.

In the mean time, measure out your oil into a room temperature wok and break in the peppers to ensure that their heat seeps out. Crumble in the peppercorns, too, and turn on the heat, slowly bringing the oil to a gentle bubble over the lowest possible flame.

When the peppers darken, the infusion’s done but don’t rush it. The longer it takes, the more heat you’re going to get in the final dish.

If your potato strips are ready, drain them now and chuck the lot in. Otherwise, remove the oil from the heat until they are. Either way, once they’re in the wok, up the heat to high and keep them moving for a quick, even fry.

Three to five minutes is all that it takes, depending on how hot the wok is and how much crunch you enjoy, but you’ll want to add the kale even sooner. It needs to spend a minute to a minute and a half in there with the spuds. After which, the cooking’s done.

Transfer the results to a bowl – You can even use the potato soaking one – using a slotted spoon or spatula to get rid of any excess oil, then quickly drizzle with your chinkiang vinegar and serve. 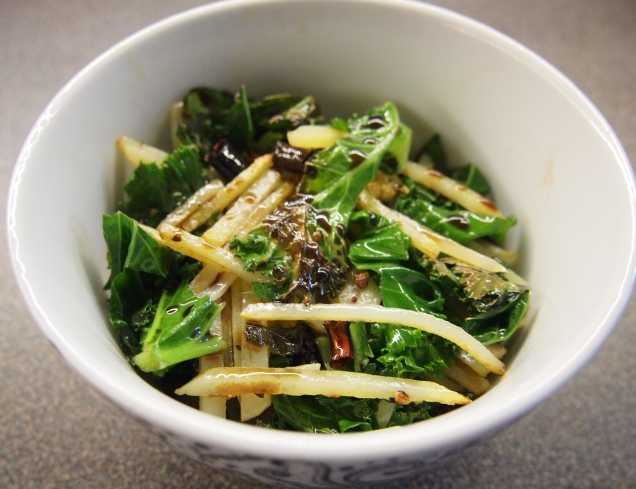 Some say that this dish is meant to be eaten cold but I was first served it wok fresh and I like it that way. With a genuine warmth to match the medium

from its chilli and peppercorns. A heat that creeps in subtly after a few bites.

Yet exactly what sort of heat seems to vary based on the quality of the ingredients. Cheap, supermarket-quality szechuan pepper provides only the slightest of anaesthetic tingles, allowing the chillies to dominate and blaze the back of the mouth. Yet, with the ones that a friend sent me from china, the chilli goes all but unnoticed. A tiny ember beneath the static tongue tingle of those good szechauns.

Again, it’s up to you which you prefer. The dish can be enjoyed both ways but I, for one, am really glad that I have the good stuff!