Howdy folks, today’s recipe is another one of my crazy fusion foods. It’s mexican and its american but it’s definitely not tex mex.

What it is is an invention all my own, cobbled together from random pub grub and then remade with slightly better ingredients back home.

It’s a quick, tasty, somewhat messy appetiser that I like to call “Mexican Buffalo Corn” and I really want to share it with you. But first, let’s clear up a few potential misconceptions:

First, it’s not mexican. It uses mexican hot sauce and mexican herbs for a mexican-style flavour but the closest actual mexican dish is a spicy, cheese-laden corn one known as “elotes”. This isn’t that.

Second, this dish is vegetarian. It doesn’t contain actual buffalo but rather a buffalo-style wing sauce, made from the above-mentioned mexican hot sauce. My own twist on a creamy and buttery, yet really rather tangy, american classic. Using corn on the cob where you’d normally find chicken.

And, finally, this is not my main recipe of the month. It’s a mini one that uses the black label Valentina sauce, even if small adjustments will allow you to use anything with a similar mexican flavour. So expect another recipe next week.

For now, though, let’s get started. 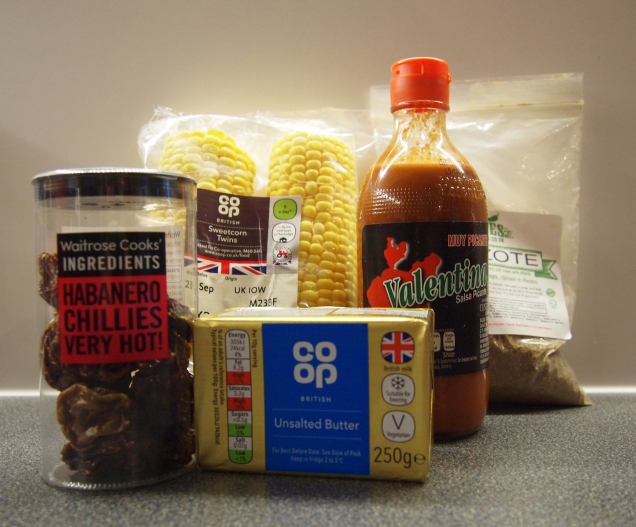 And water for steaming.

Bring the water up to a gentle boil over your cooker and turn down the heat to keep it there. Suspend your corn above the now boiling water, either with a multi-layered steamer or with a steamer basket and put a lid on it to keep the water vapour in.

There are other ways of cooking corn, including microwaving it so that it steams in its own husks, but a lot of british corn is sold huskless and I find this to be the second easiest method. And it’s not like, at a mere eight minutes, this method takes much longer.

Once the corn cobs have done their time in the steam, it’s time to take the lid off and replace them with the butter. Using a heatproof bowl, of course, to keep it contained.

Now, I’m using unsalted butter because my base sauce – The black Valentina – already has a lot of salt to it. That’s the one downside to real mexican food. If you’re using something that’s merely mexican-style, however, like Tapatío or Gringo Bandito, you can and probably should use regular salted butter.

Either way, though, it’ll take about five minutes to melt, giving your corn cobs just enough time to cool to an edible temperature, while you whisk in the sauce and all of your dry ingredients. Then simply drizzle your mexican buffalo sauce over each one and dig in for some tangy yet smooth, earthy yet red, delicious, mexican-spiced flavour! 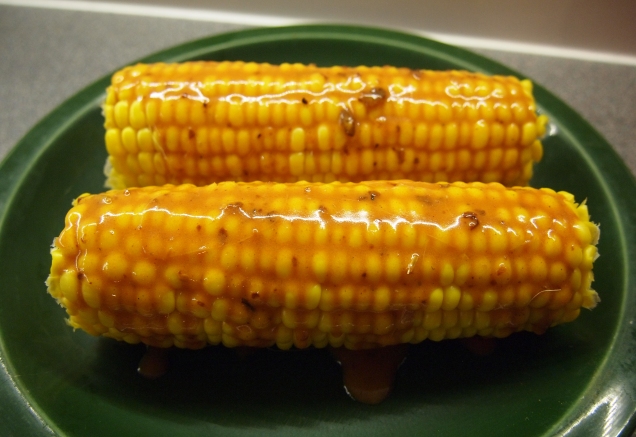 It’s not particularly spicy, even with all of those habanero flakes, but it sure has the flavour of something hotter than a low

and it’s miles better than just infusing heat into butter.

For the maybe twenty minutes that this simple recipe takes, the results are incredible!