I’ve had some truly delicious sauces from them in the past, in the form of a green sriracha, 📽️ a crazy ketchup and a heatless cherry bourbon barbecue 📽️ but today, we’ve got something extra special. As you can tell from the mock-confetti on its label:

But wait, does that say “Chipotle Hot Sauce”? Doesn’t every company make one of those?

Yes, this is a standard recipe of just three ingredients – Chipotle, vinegar and salt – but its heavier on the peppers than most smoky sauces and that vinegar is something special. Here’s what the bottle actually says:

This is a chipotle sauce of the sort that only Sauce Shop would make, with not only fermented chillies but a specially fermented vinegar, too. And, as I’ve said many a time before, the vinegar that you choose can really make or break a sauce.

Let’s see what vanilla porter does for their fifth anniversary release, shall we?

Opening the bottle for the first time, there’s no delay on the aroma that greets me. It’s bold, rich and earthy, with overtones of oak smoke and just a slight hint of a tang.

It’s not sweet, it’s not molassesy and it’s not a barbecue sauce. This one is pure chipotle, even carrying hints of a red jalapeño that has lost its natural sweetness through fermentation – Through the conversion of sugars into lactic acid.

Between what I smell and the dark, somewhat seed-filled, reddy-brown that the sauce’s minimal labelling shows off, I already know exactly how the main body of it is going to taste. Yet I still pour myself a spoon to get that last little bit. The nuance that should come from the company’s hard work. 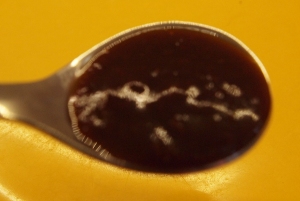 And indeed, as I fill my mouth with this thick, slightly chunky sauce, the vinegar comes through rather more than it did on the nose, making Sauce Shop’s Chipotle a particularly tangy condiment. Albeit still far from as offensively so as the Cornish Chilli Co’s.

No, Sauce Shop’s vinegar could never be that harsh and abrasive. It’s smooth, not sharp. Dark and and lightly malty. It is, in fact, almost chocolatey, in some respects. A perfect fit for a chipotle product.

I do think that they could have gotten away with a little less acidity and that that would have been an improvement but, at the same time, I really like the subtle undertones that their vinegar adds. And, being the most unique ingredient in here, I would have been very upset if I couldn’t taste it.

This is a good sauce. A delicious, smoky, savoury, tangy and nuanced,

chipotle one which is definitely special enough to mark the company’s birthday but also so general purpose that it’ll go with almost anything that the chilli will. Burger, chips, roast meats, mexican foods, mayo, ketchup, con carne and many other places besides. Just maybe not something as sweet as my mango sorbet.

If that sounds like your thing, go out and grab it now, before it disappears. Because this limited edition really is worth a try!