Hey there heat eaters, do you recognise this chilli?

I wouldn’t be surprised if you don’t, since it’s been a long time since I last had it and this time was my first time seeing it fresh, too. It is, however, the chilhuacle negro (literally “ancient pepper black”) that we saw dried in my old enchilada recipe, where I was reviewing La Picanteria’s peppers and salsa.

Honestly, though, that salsa was a tad disappointing. The dried chillies, themselves, had a wonderful earthy flavour that was uniquely reminiscent of artisan tobacco and, even way back then, I thought that I could do better with them. Now, I finally get the chance.

So, years on from that first taste, having I finally managed to track down another supplier of the pepper, I’m making myself a superior salsa negra. A black salsa that isn’t quite the traditional sort but uses the proper aztec peppers and tastes astounding.

Like, devour three portions in one sitting and then go out for more ingredients levels of astounding.

But they are hard peppers to get a hold of and, while Yorkshire Peppers had plenty for me, I can’t guarantee that they have enough to go around. If you want to follow along with today’s recipe, you may need to substitute a milder, equally rich chilli like a poblano or a rehydrated ancho or pasilla.

They won’t taste quite the same but they’re the closest easily available peppers that I can think of.

Here’s what else I used: 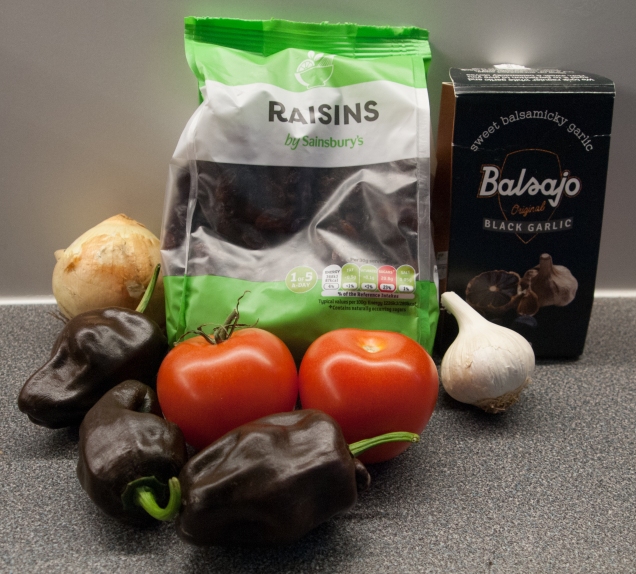 And absolutely none of the black garlic that I originally thought that I was going to use. Turns out that the recipe was rich and dark enough without its distinctive, balsamicky undertones.

So that’s one less ingredient to have to track down but you’re still going to need the epaƶoté – A traditional aztec herb that can be bought from either of the mexican importers that I’ve looked at or from the spice specialists, Spices on the Web, who you’ll find in my sidebar of links.

It’s a interesting herb. Lightly woody – Like pine, in particular – with some savoury green elements, akin to dried mint, and some undertones in common with coriander and oregano. Yet it shares none of their top notes and its own are strongly earthy. Pungent, even.

On its own, it’s not particularly pleasant, but there’s no other plant quite like it for salsa. Or for adding just a touch of dry woodland aroma to just about anything mexican.

It may sound strange but, now that I’ve tried it, it’s a mainstay of my spice cupboard.

So, with that out of the way, let’s get cooking. And yes, I do mean cooking. Because the key to any good salsa negra is its blend of dried fruit and smoky char.

To that end, we’re going to fire up the grill (broiler for my american friends) to 250°c and wait until the oven registers the correct heat. Then we pop in our tomatoes – On a baking tray, of course – and leave the door open just a crack to ensure that the ambient temperature remains just below what will trigger the heating element to turn off. To ensure that they’re constantly sitting just below a source of heat.

After between five and ten minutes, their skins will split open and they’ll start to sizzle and smell like soup. Don’t take them out. They need to be in there for a full twenty, so that their surface begins to blacken up properly.

And, just so you know, you might want to pick some nice, firm tomatoes for this. Truly ripe ones could easily turn to mush.

Then again, though, we are going to be blending them now. In a bowl, along with the raisins. Perhaps it doesn’t matter if they do.

So, now that you have a bowl full of dark, fruity gloop, what comes next?

Next, we chop the onions and garlic. Or, more specifically, we chop the onion in half and cut it into three or four millimetre slices. Then we crush the garlic with the flat of our knife, top and tail it, peel it and chop it up fine as well.

Strictly speaking, keeping everything the same size is more important than what that size is but the thinness of the onion slices really helps us achieve our goals when we fry them up. For which we’re going to heat a bit more oil that you might think we need on high, since some of it will cook off as we go at such a temperature.

Once the oil is up to a good heat and flows easily around the base of your pan, chuck in all the onion at once and let it sizzle, stirring occasionally for around five minutes. It should be more than just starting to go golden by that point.

From there, reduce the size of your hob flame to medium and add the garlic. It should take only a few minutes for that to go a similar shade of gold but you’ll need to stir more regularly now, in order to stop it burning.

The onion, though? That’s going to blacken up real good at the edges and there’s not a thing that you can do to stop it. Which is part of the point.

These blackened edges taste burnt but, once they’re in with the tomatoes, they serve only to enhance the char. As long as you don’t burn the garlic, they aren’t going to bitter our salsa. They’re only going to add to the darkness and touch of smoke.

Mix them in now.

Next, grind your allspice and cloves and mix them in, too, along with the pre-powdered herb and spice.

Then, finally, deseed, de-placenta and finally chop your chillies, rehydrating them if you’re using dried, and stir them through to finish everything off.

The results should smell sweet and rich, in a way almost reminiscent of chocolate, with just a hint of christmas spices. The taste, slightly more savoury and very full-bodied but with, again, some slight similarity to mince pie filling.

It’s rich, dark, dried fruit flavoured and well spiced, with some savoury smoky notes but also a natural sweetness to it and, if made with the proper chilhuacles, a delayed, low-medium

A seriously tasty and at least semi-traditional way to enjoy one of the world’s oldest and most unusual peppers. I vastly prefer this to the previous ancient salsa recipe that I tried and would love to give it a go in cheese sandwiches, over burgers or on the side with a con carne but, let’s be real here. It’s not going to make it that far.

This salsa is just to good to make past the packet of tortilla chips that I keep in the kitchen.

4 thoughts on “Return of the Ancients”