Hey folks, I hope that you’re all enjoying the summer sun.

Today, I have for you some rather summery sauces that I picked up a little over two summers ago. A pair of highly fruity products that I tried all the way back at Reading Chilli Fest and have been just waiting to post my review of.

But, between freebies, newer items and the fact that I wanted to spread such fruity sauces out, it’s only now that you’re finally seeing this pair. The final pair, in fact, of Mango sauces from that event: 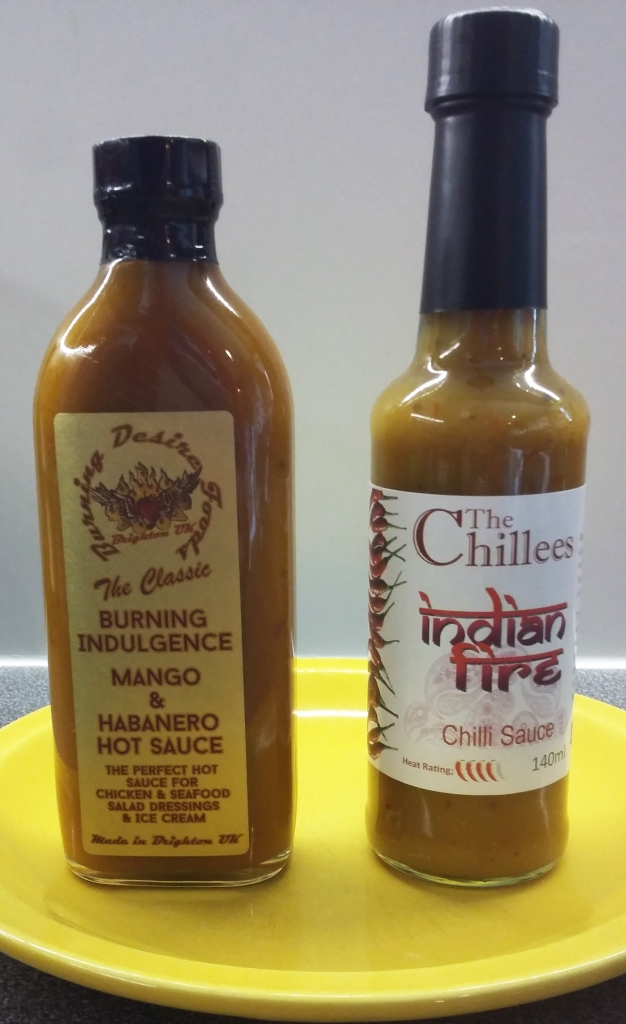 How will these two, in particular, compare, though, to the oodles of other mango sauces on the market?

The Chillees’ Indian Fire comes out the gate pretty poorly, with only mock-arabic text and a faded henna art-style pattern on white to represent itself. Packaging that looks far better than that of their last product but still doesn’t exactly say quality.

Whereas Burning Desire’s flaming, winged chilli logo and yellow-outlined red text look fantastic atop their textured gold label. It says even less about the flavour of their Burning Indulgence but it implies a level of quality and class that the Indian fire just doesn’t have. At least visually.

And The Chillees’ sauce, itself, has a rather murky appearance through the glass. Yellow, yes, but a muted and slightly grey-brown shade. Not nearly the appetising, bold orange of Burning Desire’s offering.

The two are quite different in their appearance and definitely stand out, visually, from all the other mango sauces on the market. It’s just, that isn’t necessarily a positive for the Indian Fire. It’s going to have to really grab people by the taste buds if The Chillees want it to succeed, because it’s unlikely to win them over any other way.

So, if flavour is what’s important – And it always is – why don’t we start the tasting?

And yes, even in taste they are very different from each other but it’s not how they differ that stands out – It’s how they don’t. How they are, in fact, quite similar to ones already out there.

The Burning Indulgence is very heavy on its habaneros and has a real citrus tang to it but still a smooth and powerful hit of the promised fruit. It reminds me of the mango-backed 📽️ Heavenly Habanero 📽️ from Byron Bay or a version of Upton Cheyney’s mango sauce that’s given up its beautiful three way contrast for the more common, orange habanero.

In that regard, I’d actually say that it’s worse than Upton Cheyney’s sauce but it picks up the slack in other areas. Most noticeably, with a particularly sweet, fresh and smooth tasting alphonso mango as its primary ingredient.

The quality of the fruit alone makes this sauce but the way that its smooth, natural sweetness plays off against the various acids – Especially the lime juice – and the distinct tang of fresh habanero, while also complimenting the gentler main flavour of those chillies, is truly beautiful.

Whereas the Indian Fire, coincidentally, reminds me of the other sauce from that very same post. The Wiltshire Chilli Farm mango sauce that I reviewed alongside Upton Cheyney’s.

It’s a sweet, mango-based sauce but, aside from that, it’s nothing like the Burning Indulgence. This one bolsters itself with a strong undertone of onion and, as with Wiltshire Chilli Farm’s product, a lot of indian spices.

If an indian takeaway made a curry out of mango, this would be the resulting flavour. A little sweet, a little bitter, a lot of fruit, a good deal of onion and a spice blend that makes good use of both mustard and cumin seeds. Among many other things that I can’t quite place right now.

It’s good and it’s the same idea as the sauce that I’ve been comparing it to but it’s not, in fact, the same flavour. Because, unlike Wiltshire Chilli Farm’s, today’s curried mango product doesn’t use the spices from a chutney.

Both are gorgeous and, if you’re after the flavour of the fruit, I’d say that it stands out just a little more in Wiltshire Chilli Farm’s product. Whereas The Chillees’ Indian Fire is a touch more unique.

though, and will likely go with the same sorts of things. Curry, cheese, chicken and strong flavoured fish, like tuna, would all be great with this sauce. And yes, I would put this one on kedgeree as well.

As for how Burning Desire’s compares, I’ve already said that there can be little connection drawn between their Burning Indulgence and the Indian Fire. The only comparison that I can really give you, on that front, is that the Indulgence is a good deal hotter. On the high end of a

But there is a good deal I can say about it and the other sauces that I’ve mentioned in the post.

It is also a touch hotter than the 📽️ Heavenly Habanero 📽️ and does all the same things, with fresher fruit. Aside from that extra heat, today’s product strikes me as strictly superior, so, unless Byron Bay’s tickles the very tip of your threshold for chilli fire, I’d recommend Burning Desire’s over it every time.

Which is sad but impressive, given how long I’ve considered Byron Bay’s a high quality staple.

Upton Cheyney, though, still hold a potential spot on my shelf, as the red habaneros that they use provide an extra layer of contrast that isn’t present in today’s sauce, no matter how much it excels in other areas. It’s not a necessary contrast, per se, but it means that the two sauces wind up filling slightly different roles.

The Burning Indulgence will certainly still work as a dipping sauce and in my tacos but the curries that I see it working with are creamy kashmiris and fruity dansaks or pathias, not so much the thai sort that I suggested for its predecessor. And I feel like this product might even be a little too bold for salad dressing, lending itself better to becoming part of a vinaigrette than to simply pouring over the veg.

It’s definitely suited to chicken but I’d also go a little further afield to a root vegetable casserole or tagine, since I think it would pair really nicely with cooked carrots and sweet potato. Or, for that matter, with a strong-flavoured meat, like duck, that benefits from the addition of sweet yet tangy citrus fruit.

I don’t find it quite right on ice-cream, despite its maker suggesting that I use it there, because it carries slightly too much of the cider vinegar’s aged apple tang, but it’s close and your tastes may well differ from my own. It’s worth trying for yourself.

And indeed, this sauce, The Chillees’ sauce and both of the sauces from my previous mango comparison are well worth giving a go. All four have been excellent and were different enough not to overshadow each other. You can’t go wrong with any of them but here’s what goes into today’s two:

While The Chillees’ Indian Fire contains:

And, though only the Indulgence claims to be vegan, neither contains any animal-derived ingredients. But there’s something else that bothers me about the Indian Fire’s list.

Normally, I really appreciate companies naming the specific chillies that they use but here, The Chillees appear to be making up their own names.

“Jamaican Jerk Chilli” is clearly meant to be scotch bonnet but what about the “Fire Chilli”? Is that the pusa jwala? Pusa jwala is commonly shortened to just jwala, meaning “flame”, but many peppers have similar words in their given name, so I just can’t be sure.