Alright, everyone, you’ve heard of hot sauce but, today, we’re looking at hop sauce. A green and herby bird’s eye blend from Hop Burns & Black. The most well known chilli retailer in london.

I picked up a few things, when I was last there, but today’s “Hoptimo” is special. Not just because it contains hops but also because it’s a custom creation from Slow Richie’s and Brick Brewery, made specially for the store. This is a Hop Burns exclusive:

But it does, indeed, contain hops. The signature ingredient in one of the shop owners’ other passions: Craft beer.

And, in this review, we’re going to find out what those hops do for hot sauce flavour.

But first, I need to see what they do alone, for comparison. 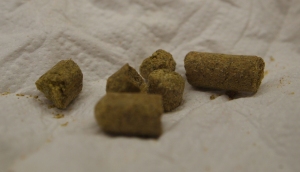 These dried hops are bitter, earthy, herbal and slightly vegetable, with mint-like menthol overtones. I can’t say that I particularly like them, especially as their bitterness hangs around in the back of my throat long after I’ve swallowed, but something about them seems familiar.

Their green and astringent side reminds me of broken ferns but, when combined with those earthy and herbal notes, these hops are even more reminiscent of a student-filled park on an early sunday afternoon, if you know what I mean. And, as it turns out, there has, indeed, been some interbreeding between those herbs and these, in recent years.

Still, it’s an interesting flavour and one that I could definitely see leaving its mark on a dry pint. Or, I suppose, a rather herb-heavy hot sauce. 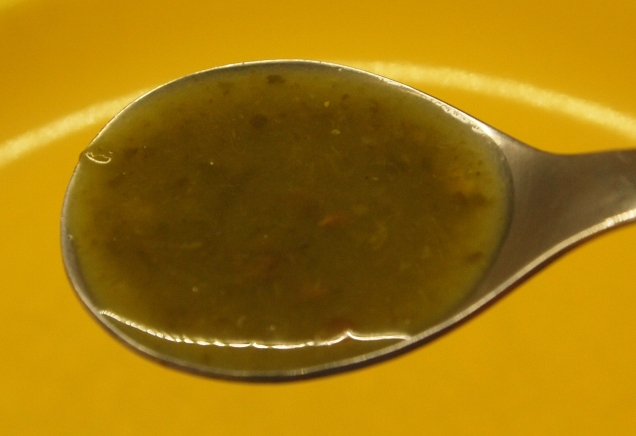 And that is, indeed, what today’s product is. Very liquid, very green and not just strewn with but absolutely filled with shredded leaves, stalks and cumin seeds.

They say that this is a zesty garlic sauce on their plain, white label but a single glance at my spoonful tells me otherwise.

This is a herbal, green chilli one with, perhaps, some supporting elements from its garlic and lemon juice. And its aroma matches that appearance to a tee.

In flavour, however, the garlic undertone of this sauce is far more apparent than expected and there is just a little tartness to it. Neither the fruit nor the root dominate, like the herbs, but they provide a solid, earthy base on which that unique herb blend can build. Alongside the very complimentary, green chilli taste of the product’s bird’s eyes.

It’s a great combination that utilises the hops well, even if it doesn’t focus on them too heavily. And, while those hops were bitter and menthol-tinged on their own, that menthol has cooked off, just like that in Fat Man Chilli Co’s Mint, and the bitterness has been masked by the rest of the product.

Instead, it’s their soft, earthy, vegetable kind of herbal taste that shines, here, bringing together the garlic and cumin with the greener coriander and parsley leaves. And they also help to keep the sauce firmly grounded in the realms of savoury and not sweet.

Elements of today’s item remind me of Chilli Pepper Pete’s Zhoug but this one is rather less bold and brash. Something that I would actually use as a pour on sauce to my pastas, pizzas and calzonés, not just as an ingredient. Because this one goes really well with fresh cooked veg, rich meats like peperoni, and tomatoes.

Whereas, heat-wise, it’s actually stronger. Hoptimo’s thirty percent chilli content has given it the low end of a

which is good and hot in the back of my throat.

It’s not quite the sauce that I was expecting, given the label, but I like it a lot and, if you’re after a herb sauce with a difference, this is it. Just don’t expect it to taste much of lemon, beer or anything else with legal restrictions on it.

This is a totally above board sauce from Hop Burns & Black, Slow Richie’s and Brick Brewery, which I wholeheartedly recommend.

Here’s what goes into it:

And, unlike a lot of the products that I feature, this one actively states that it’s vegan on the bottle.

5 thoughts on “Hopping to It”