Welcome to june, everyone. To kick this month off in a rather special way, I’m looking at a pair of imported hot sauces that harken back to the dreams of my youth. 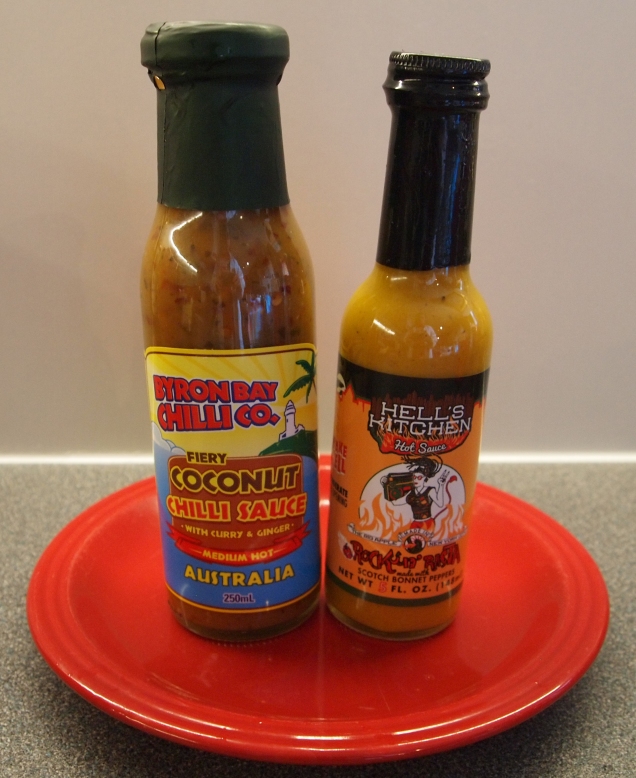 Byron Bay’s Fiery Coconut Chilli Sauce, imported from australia by my good friend Matt Tangent, of Aussie Hot Sauces. And Hell’s Kitchen’s Rockin’ Rasta from the US, first imported by Russel of Grim Reaper Foods but, more recently, picked up by the UK’s largest importers, Hot-Headz.

And, if you’re one of my UK readers, you might recognise the coconut sauce on the left. It may be made in australia now but, until about a year ago, Byron Bay had a partner company producing it over here, as well. Matt actually brought this one over at my request, since I really wanted to talk about it. Thanks dude!

Yet, as excited as I am for the return of the Byron Bay range, theirs isn’t the only sauce on display today. Or even the only coconut one.

Neither of today’s items are quite the korma in a bottle that young me wished for but both are delicious, creamy, rich and sweet, coconut-based, curry sauces, all the same. Ones that my ten-year-old self would have been overjoyed to own.

So the question is: Do they still hold up to the more refined tastes of my mid-twenties?

Byron Bay’s label hosts a delightful island vista, just shy of tropical, rendered in simple, bold, light colours to keep from overcomplicating the image. And, while there’s little in the way of imagery to denote its ingredients, the brown background of the sauce’s name and the lettering on the word “coconut” are clear enough to get its fruit across.

Whereas the Rockin’ Rasta comes up rather short in the visual explanation department. Its green, red and yellow colour scheme sells its caribbean inspiration almost as well as the attire of the company’s demon girl mascot but it wasn’t until I read the ingredients list that I realised that it wasn’t the typical mustard sauce.

Hell’s Kitchen have their branding down and it’s cool that the clothing and hair of their mascot change to reflect the region, yet the picture of their pepper is very subtle and there’s nothing else to tell us what goes into the sauce beyond the list. Here it is:

While the more clearly labelled Fiery Coconut does say everything on the front of the label, even if its curry nature is purely in text. Here’s what it contains:

It’s not suitable for vegetarians or vegans, unlike the Rockin’ Rasta, and you can kind of get that from its aroma. A savoury, oily note on the nose that, once you know what it is, is pretty unmistakeable. It doesn’t dominate the sauce’s scent but I can’t say I care for what it adds to it.

Unlike in the mouth, where that savoury note comes across as richer and more umami-ish, adding a far more welcome depth to the smooth, creamy, sweet and surprisingly herby sauce. 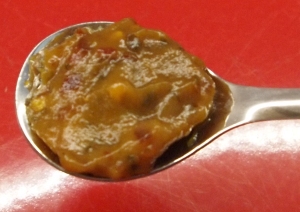 The curry powder plays a more secondary flavour role, despite how well the spices carry throughout the sauce, due to how dominant that fish-enriched coconut is. Yet the coarse grind of those spices does something else of importance, adding a tiny crunch to the product and preventing it from feeling like spicy baby food.

It’s an unusual texture and it doesn’t exactly pour well but the Fiery Coconut is a real treat in the mouth and smears beautifully over chicken, fish and barbecued shrimp or prawns. Plus, it’ll lend its own richness to any coconut curries you plan on making, if you add it early on in the cooking, and work similarly well to give creaminess to a mushroom-based soup or stew.

The burn of this one is only a late, medium

in the back of the throat. It won’t add too much fire to those dishes but, in terms of taste, I’ve not had any other sauce like it. It’s delicious!

So, how do Hell’s Kitchen compare? Well, their sauce still has a certain richness to its aroma but it’s much lighter, as is reflected in its appearance: 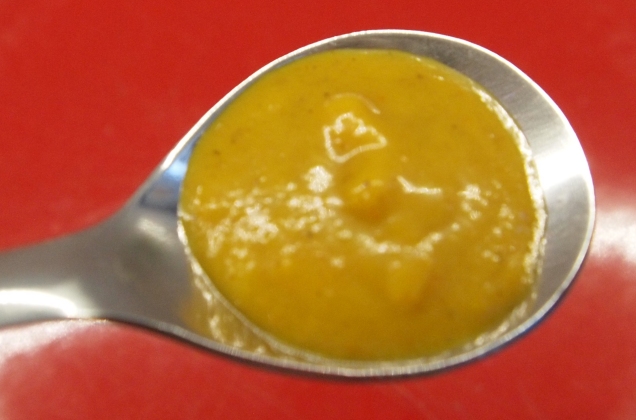 It’s smooth and thick but will actually flow off my spoon, if held at an angle, and you can tell that it’s rather more pepper-heavy.

If you were hoping to taste the mango, you’re going to be disappointed, but the coconut’s creaminess and the orange vegetable hints from the carrot definitely go a long way in supporting the main ingredient – The yellow scotch bonnets.

This one’s hot, hitting the very top of my

rating, but it’s not hot for hot’s sake. Its chillies bring an earthy, yellow pepper flavour that works wonders with the coconut and touch of garlic, while providing a bit of hot chilli sourness to offset the sweet of the honey.

The sauce winds up tasting almost rooty or woody, perhaps from some classic caribbean allspice, and smooth and mellow as it is, it’s going to add a lot to caribbean curries, patties and chicken dishes. Maybe a few thai dishes, too, an egg mayo or even a cheese sauce. Its earthy notes are almost reminiscent of nutmeg, after all.

And yes, I would throw either of them over my chips, even now.

I do prefer Byron Bay’s Fiery Coconut to the Rockin’ Rasta, if I’m honest, but neither is a replacement for the other and both are great coconut sauces that do, indeed, please my adult self as much as they’d’ve pleased a younger me. I could happily recommend either of them and, if you can’t eat fish or you have a genetic aversion to coriander, you’ll still be very happy with Hell’s Kitchen’s creation.

4 thoughts on “Curry in a Bottle”