Hey folks, do you recognise this fruit? 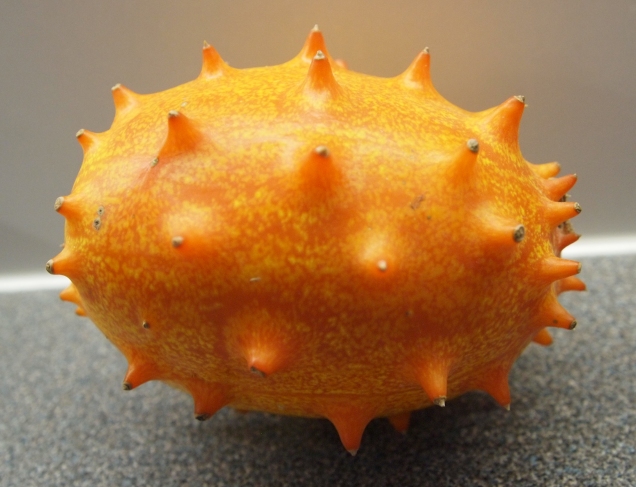 If you’re a Marvel fan, you should, ’cause this is the only thing growing in Thanos’ garden. And, while it doesn’t come from an alien cactus, the inside of the real kiwano looks more extraterrestrial than anything in Endgame:

It’s a freaky-looking fruit and its taste is just as weird – A blend of cantaloupe, cucumber and lime – but it’s right at home with herbs and citrus. It’s more vegetable than fruit but a friend to fresh flavours all the same.

In today’s celebration of superhero movies and obscure, african fruit, I’m not going to be replicating the mad titan’s horned melon soup. That dish is as much of an affront to the world as his use of the infinity stones. A thick, snotty, disgusting mess of a meal, about which horror stories have trickled down through my family for generations.

You do not cook the kiwano.

This fruit or vegetable, whichever you choose to call it, is best served fresh or frozen. It’s typically recommended for use in mousses, smoothies, sorbets and citrus-heavy cocktails but, for today’s recipe, I’m going guac.

Mexico’s famous, creamy dip/condiment hybrid that brings together all things fresh and green.

Now, I have gone on record, in the past, saying that I don’t much care for guacamole, or any other form of avocado, but, in the last month or so, I’ve somehow taken a liking to MexGrocer‘s recipe, all the same. My concoction is based on theirs, yet I’ve made several more tweaks than just the extra fruit, so I still feel wholly qualified to call it my own creation.

Here’s what you’ll need to make it:

And up to half a lime.

Why up to? Well, I paid quite a pretty penny to get my kiwano ripe from My Exotic Fruit but you will, on occasion, see it sold at market stalls or in the larger outlets of chain supermarkets. When bought from a supermarket, however, the horned melon is a very different beast. It’s picked early, for greater shelf life, and has a lot of tartness to it, bringing its own lime-like qualities to the fore.

As a result, the amount of citrus that this recipe calls for is entirely dependant on where you buy Thanos’ favourite vegetable. I used that full half lime but some of you might not need any at all. A supermarket kiwano, itself, may be enough.

But, speaking of variation in fruit and veg quality and ripeness, the kiwano isn’t all that matters. Soft avocados, ripe enough that you can feel a little give with your palm, are even more integral to making this dip than the right acidity. If you have to use your fingertips then they aren’t ready.

And, while much less of a big deal, using ripe, juicy, red tomatoes will still improve the end result.

For your chillies, though, you don’t want ripeness. You want to get them just as they’re beginning to yellow.

This gives them some citrus elements but keeps them from tasting lemony. Instead, their main flavour is that of a soft, green vegetable and that, combined with the citrus, is unlike any other fruit or veg. It’s an utterly unique taste that few people seem to realise the value of.

Nowhere sells lemondrops in this state but most chilli farms do sell lemondrops and will be willing to accommodate a special order if you ask nicely. Mine came from Cornish Chillies but I’m sure that others will be just as happy to help.

Or, of course, you can grow your own.

However you get your hands on them, these hold a unique green chilli flavour that works wonderfully as an undertone to today’s guacamole. Especially once we roast them for a pleasant, smoky char that takes some of the edge off.

To do this, skewer them and hold each one roughly an inch above an open flame for several minutes, turning regularly for an even light blackening like so:

Now chop them, the coriander and your onion as fine as you can, removing the seeds and veiny placenta from the peppers. Ideally, the onion should be diced into half-centimetre cubes and the lemondrops even smaller.

Then, once all is nice and small, take a little bowl and use it to toss them together with the salt. This draws the juices to the surface to allow them to oxidise, which is what creates the pungency in the onions.

Set the results aside for now, though, and chop the tomatoes into similar cubes, leaving them on the chopping board while you decant the avocado into a bigger bowl.

Mash the green, buttery vegetable with a fork until it forms a finely textured paste, then scoop in the contents of your kiwano. Mix the two together and taste, before adding whatever amount of lime seems appropriate. As explained above, I can’t tell you how much you need because it will vary quite heavily.

Finally, stir in the tomatoes and the onion mix and either serve or carefully cover in as airtight a manner as possible, to prevent browning.

If eaten immediately, this dish has a sharp

but, if refrigerated, the avocado will mask most of the chilli as the flavours mingle and you’ll be left with a mere one.

This is a mild dish, more about the flavour than the fire, and the chillies only emphasise that. They support the other green and citric elements, while adding depth to the taste. Their heat accentuates the onions, rather than providing any serious kick, and the fruitiness of the tomatoes provides a great contrast to the peppers.

As for the kiwano, it, too, adds depth to the green. Each individual seed winds up coated in a goo with far bolder, brighter, more cucumber-like taste than the avocado, giving bursts of flavour to the bowl and adding another level to the fine yet chunky texture.

They are, after all, like smaller, more fragile pumpkin seeds.

I’m very happy with how this guac turned out and maybe, just maybe, Thanos wouldn’t have had to die if he’d made it instead of that vile soup.

2 thoughts on “The Mad Titan’s Molé”