Hello again, fiery food friends. Having heard from them just last month, I’m sure it comes as no great shock to see Fat Man Chilli Co on here once more but today, we’re getting just a little further out there in ideas.

That probably sounds like a rather bold claim after their wacky green sauce but that’s the thing – Both their green and their chilli ketchup were sauces. This week’s item is anything but.

What I have on show today is a grinder containing their Sweet Child o’ Mayan – A coffee, cocoa and chilli rub intended to glaze dark meats.

As I mentioned back in my chipōtle salsa review, I’m not the biggest fan of coffee. I’m more of a tea guy and, even then, that’s something that I’ve picked up since I began my blog.

But, even so, I’m perfectly willing to give this item a go because that same salsa opened my eyes to what coffee can bring to a chilli product.

Plus, of course, the other ingredients all sounded like a great fit with it:

It’s a simple list – Only cinnamon and sugar weren’t already listed on the front – but it’s a promising one. One with very little that could go wrong, as well.

Just a bunch of rich, dark and/or golden flavours, coming together with a hint of hot pepper. It sounds practically decadent but, before we get into it, there’s something I need to address about the packaging.

No, not the label – That’s no different from Fat Man Chilli Co’s others.

Instructions extruded from the lid, telling us how to get the perfect grain size from this grinder.

But, for most purposes, you’re going to want it nice and fine, I think. 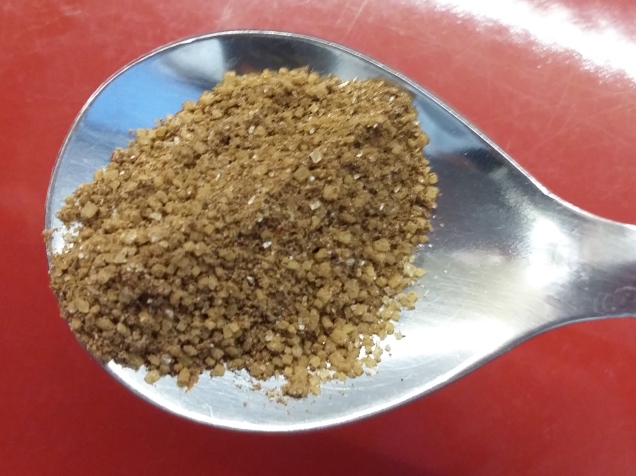 Now, just so you’re aware, it is a little slow to come out on this setting but that’s just more time to enjoy the smell. A dark, rich and savoury, coffee-based aroma with sweet brown sugar and cocoa notes coming through behind. It’s gorgeous!

And, while the taste isn’t quite as heavy on that upfront coffee, that only means that the secondary flavours have more room to shine and we end up getting to taste the cinnamon quite strongly.

The chilli is more there for heat, I feel, but I’m not too fussed about that. I’m getting all the enjoyment of a mocha, with none of the bitterness, the great taste of brown sugar and one of my favourite spices. I’m loving this!

But it’s not meant to be eaten as is. It’s meant to caramelise over your roast.

So, while I’m going to call it a

on its own, that doesn’t necessarily reflect its proper usage.

Cooked over meat, I find it drops right down to a barely detectable

but it’s such a great blend of sweet and rich with its golden sugar and sweet cinnamon paired off against the slightly more savoury coffee and cocoa. Coffee that you can definitely tell has been ground fresh.

Ideally, you want an equally rich and flavourful meat to pair with it, like beef or pork, but just about anything that’ll hold this sweet, sticky, crispy coating is going to become highly moreish in its presence.

And, while it never gets too high, the heat does head back up towards that of the blend alone as you keep eating. The spice’s fire and flavour hangs around for quite a while between bites and uses the fact that it does so to build upon itself.

But where I got the most of this product’s strength in my tests was, to my surprise, when I tried it with milk.

A tablespoon, stirred into a steaming mug full, would have made for the most soothing evening blend of mocha latte and cinnamon hot chocolate had it not been for its unexpected low

It was still wonderful but it most certainly wasn’t a night-time drink at that strength.

Other uses that spring to mind are sprinkling over con carne to add a little extra depth and grilling on pineapple or, for a vegan meat alternative, smoked jackfruit.

This item is very much about flavour first, so it may not satisfy someone looking for a good burn, but it’s downright delicious so I hope at least some of you out there appreciate it as much as I do.

2 thoughts on “The Mayan Grind”