Hey folks, today I’d like to talk to you about a recent purchase of mine.

Not another sauce though, or even anything edible. No, today I’d like to talk about my mood ring. 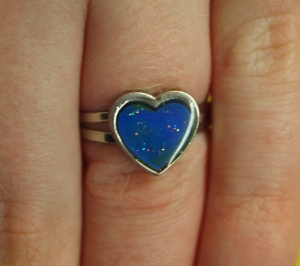 A silly piece of jewellery which, supposedly at least, measures small fluctuations in the wearers mood and signals it to the world. But that’s not what it really does.

Or why I bought it.

How the mood ring really works is by measuring your body temperature. By absorbing the heat of your hand through its metal band and using that to determine which of its many layers of heat-sensitive paint is most visible.

It doesn’t measure your emotions directly but there is at least a little connection between heat and mood. Namely that the temperature of your hands, compared to the rest of your body, is based on blood flow and heart rate. Things which most definitely change based on excitement, fear and stress.

So I though, hey, chilli makes the body feel hot. It promotes blood flow to the extremities so that the body can cool off. If I eat something way too spicy, all of my actual heat should go to my surface layer and make my ring change colour.

If it worked, it would be super cool to have a similarly painted bottle that you could hold to see the effects of the chilli. But it didn’t.

No amount of suffering on my part, be it with reaper, scorpion or extract, would shift my mood ring from dark purple. I was most disappointed.

So I tried again with another fruit. One actually known for its ability to raise body temperature.

I’m not going to tell you what happened here but, if you want to see me and a friend testing the effects of durian – The legendary vomit fruit – you can check it out 📽️ over on youtube 📽️.

And, for the sake of that video, I compiled a list of what each colour means, pulling from every other source on the net to make the most all-encompassing and accurate version imaginable. Which, since the connection between heat and mood is far from a direct one, still isn’t very accurate.

Black – Dead or dying. This can be literal, since a corpse will not have the heat to change the ring from its resting, room temperature state, but it can also be figurative. It can hint at the wearer being overworked, stressed out of their mind or, more simply, in dire need of waffles.

Grey – Down. Grey is a dull, subdued colour which supposedly reflects a similarly subdued mood. One of nervousness, tiredness or depression.

White – Frustration. An emotion that could be the result of many more specific factors but is commonly, at least in the mood ring world, tied to boredom, confusion or paranoia.

Red – Excitement. Perhaps in a positive sense but perhaps not, since anger and fear may also be considered forms of excitement.

Orange – Impatience and eagerness to act, typically implying a daring sense of adventure.

Blue – Confidence and passion, a good mood for romance.

Light Blue – A state of relaxation and calm, great for sociability and playfulness.

Turquoise – Contentedness or the pleasant feeling of being around or dreaming of someone you love.

Purple – Clarity. The sense of knowing what to do to achieve your goals and the drive to make it happen. Often comes with a sense of elation.

Brown – Restless worry or the sort of nervous dread that eats away at you, not the more exasperated form associated with grey.