So it’s tuesday again and I’d like to welcome you all back but I’d also like to welcome to the stage someone new. A small company from Lancashire named “Magma Sauces”, who make several fairly standard kinds of chilli condiment. And this: 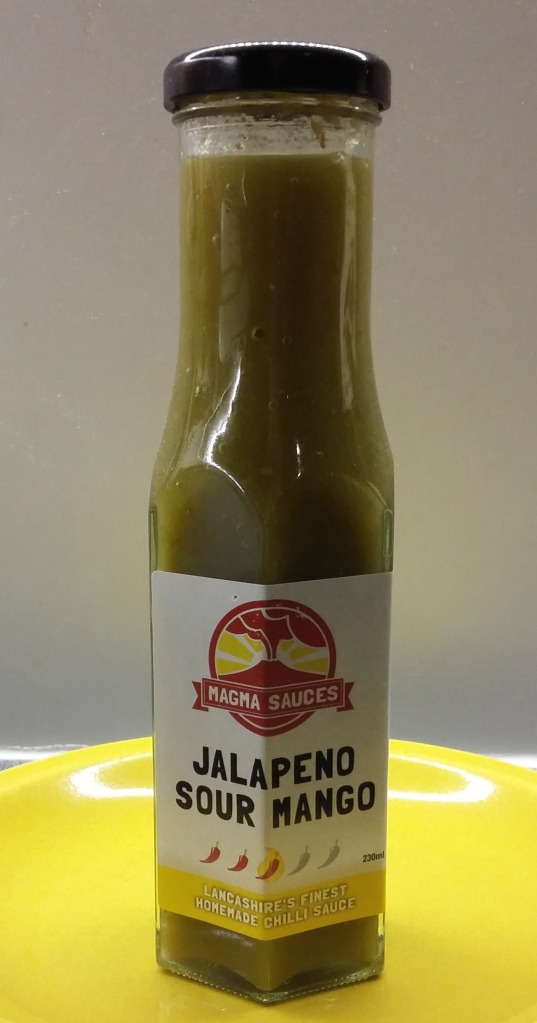 Nothing with crazy hot peppers but a company doesn’t need them to attract my attention. Not when they can do something crazy and unexpected with a common variety like this. And definitely not when it also happens to blend two of my favourite flavours.

So, given how excited I am by this particular sauce of theirs, I’m going to dive right into the tasting today. To be utterly frank with you, I just don’t have the patience not to.

It’s quick to pour but still decently thick, with tiny, sriracha-like grains suspended in its more liquid bulk. Its aroma is sweet and fruity, while its appearance is an interestingly yellow shade of green. One which suggests that it isn’t the mangoes that are sour.

And indeed, looking at its ingredients list, only its mango powder and cider vinegar could possibly be causing that yellower colour:

Everything else is either green or colourless, including my least favourite variety of bell peppers, but we’ll talk about what they bring to the sauce in a moment. First, I want to get my first impression out the way: This tastes very chinese.

But there’s more. A third one of the five main tastes that comes through a moment later. And that, dear readers, is where the bell peppers come in.

What they bring to today’s sauce is bitterness and bulk, as the remainder of their green pepper flavour blends in with the chillies. Chillies that already provide a shocking

in the throat and back of the mouth.

I definitely think that the flavour of the Sour Mango sauce would be better without the bell peppers but, given the usual expectation that a green sauce is a mild one, I can totally see why Magma Sauces chose them over greater chilli content. It’s already breaking through the usual heat boundaries of its colour as is.

And it’s not as if it’s an overly bitter sauce, anyway. Some people might well wind up appreciating how it balances out the sweeter start to its flavour, much like it did in last week’s peach product.

What I can say with certainty, though, is that it does a lot to define the useage of this sauce.

A sauce that contains sweet, sour and bitter tastes, with a tiny hint of salt for number four, is just crying out to meet the fifth and final taste that the tongue, itself, can detect: Umami. That savoury meaty, richness found in mushrooms, meats and some varieties of bean.

Yet, while I commonly use the two words interchangeably, not all of flavour can be summed up by the five tastes. The mango’s easing of the transition between the sauce’s sweet, green, grassy start and its tart, tangy, fruity, browned-apple second phase is far more than just sweet followed by sour. And it isn’t the tongue that detects its vegetable finish, either. Odd as it may seem, most of flavour is actually in the nose.

And it’s the intricacies of flavour, not taste, that have the final say in what this sauce goes with.

Bold green flavour pairs well with equally bold meats like peperoni and bacon but the fruitiness of this sauce screams “pork!” to me. Whilst, at the same time, its smoother segments seem like a great fit for hot dogs and, as a whole, I could see it going pretty well on okra fries, a slightly salty egg fried rice or simply in a fried egg sandwich.

Being totally honest, it’s not my favourite of sauces, despite my high hopes going in, but it’s not a bad one, either, and it lives up to everything it says on the bottle.

Three red chillies out of five heat? Check. That’s a high medium for sure.

And lancashire’s finest homemade chilli sauce? Well, I haven’t seen any other companies out of that particular region…

If you’re looking for a green sauce that’s a bit different, has some fruitiness or a bit of a bite (both in its chilli and its tang), Magma Sauce’s Jalapeno Sour Mango is probably worth giving a go.

It isn’t an all-round, good for all occasions condiment but it’s the sort of unique flavour I could see having a cult following – A small but dedicated fanbase who go out of their way to find anything and everything that it’ll go on. And you’d better believe that I’ve seen a few of those in my time reviewing.

But, speaking of occasions, there’s a reason that I pick today to show you this sauce: It’s chinese new year and, as I was writing my review, it soon became apparent that it was perfect for the holiday.

It was green – A “new” chilli for a new year – but it also had a very chinese flavour and required me to talk about the five tastes. An originally chinese concept.

Everything just seemed to fall into place to make this the perfect post for the lunar new year. So, if you celebrate the holiday, have a great time today and I really hope that you’ve enjoyed what I’ve had to say.