Hello again, everyone, and welcome to what could almost be called a follow up to the apple tart recipe that I posted two days ago.

Don’t worry if you haven’t read that one, though. It’s not a requirement for this sauce review. Just a dish that I made to go with it.

No, if there’s one thing that you should know beforehand, it’s The Prodigy’s hit song from nineteen ninety seven. Because what we’re looking at today is Devon Chilli Man’s tribute to it: His Smack m,Peach up!

A sauce that I’ve long been meaning to talk about, since it’s the only one that I’ve found with Jay’s famous Peach Ghost Scorpion – A chilli once thought to be a potential candidate for the world’s hottest.

But, before I dive in to talking about the product and its pepper properly, I just want to quickly clear up a misconception about the song for which it was named. Since, if the lyrics are taken literally, it sounds a lot like it’s advocating domestic abuse.

Smack My B🔥🔥ch Up is, as I only discovered when researching for this very post, code for getting one’s fix. Normally one’s fix of a different sort of smack but, in the case of this sauce, it’s sweet, superhot chilli instead. A subtle mention of its addictiveness, hidden within reference to the music of my youth.

Not that I was ever a fan of hard techno.

Does it live up to that meaning, though? Is it good enough to cause addiction? Will it cause the rush of endorphins often referred to as a “chilli high”? Does it even contain peaches?

Well, I can answer the last of those now – It most definitely does – but you’re going to have to read on for the rest.

This is the Devon Chilli Man’s attempt at a bittersweet sauce. One that pairs fruit, sugar and honey with the gentle bitterness of his own grown, peach-coloured peppers. Yet its labelling, depicting his chilli superhero logo on black, is no different to what we saw adorning his green chilli sauce.

It’s a good logo but the background colour could easily have changed to better reflect the contents. As is, this says nothing about the sauce inside, visually. Our only clues to its taste are the name and the ingredients list. And, let’s be real here, few people are going to know what a jay’s peach ghost scorpion tastes like before they’ve tried it.

At nearly twelve percent of the product, though, people are gonna know afterwards, though, right?

Well, not necessarily. Despite its intense heat, the JPGS is a mild flavoured pepper. One without any notes of red, yellow, green or brown chilli. One that showcases the subtler sides of its ghost and scorpion parents but one that is, as a result, still a little subtle, itself.

As someone who’s grown the pepper before, I was pretty disappointed by it. Not because it wasn’t tasty but because the pleasant flavour that it did have wasn’t strong enough to hold its own in my cooking.

But let’s see what the self-proclaimed caped crusader of chilli can do with it, shall we? I’m sure that he knows the strain better than I do. 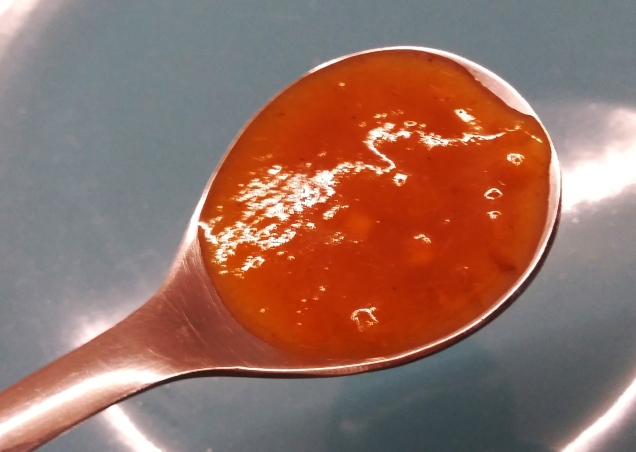 Flowing from the bottle with ease, this sauce is neither thick nor thin but is undeniably sticky. Sort of like a fast flowing barbecue sauce.

Its aroma is predominantly that of baked peaches, yet with a bit more sweetness and a pale pepper undertone that’s hard to describe.

Slightly woody, a little like almonds and just vaguely reminiscent of straw. Entirely savoury, yet umami-free, and obviously primed to hit only bitter, out of the five tastes. This, along with some more floral accents and the tiniest touch of something fruity, is the distinctive scent and flavour of today’s chilli.

I’m getting very little, if any, of the spices on the nose but they come out a lot more in the flavour of this sauce.

It’s still very much honeyed peach upfront but its wintery, cinnamon-heavy selection of spices, most likely also including nutmeg, is now immediately obvious. Unlike the chilli, which largely hits me with that bitter note, followed much later by a

that arrives in the back of the mouth and in the throat only after the sauce’s sweetness has begun to fade away.

And yes, it is a very sweet sauce, as its stickiness and fruit content alone should be enough suggest, but its fruit, spices and lack of any obvious vinegar element all really work with that to give Smack m,Peach up! vast potential as a dessert topper.

It’s not quite the addictive, have it with everything condiment that the veiled connotations of its name implied – Its use being limited largely to fruit pies, pork and duck – yet everything that it does go on is an instant winter treat with an awful lot of warmth.

Those of you who like it super hot are the target audience for this one, especially if you have a real sweet tooth, but those of you who only want hot or extra hot might still find use for it spread sparingly over ice-cream.

As for me, I definitely fall into that target group. I absolutely love this stuff and even went out of my way to bake a tart to go with it. One that would provide a simple, baked fruit base with just a little touch of tartness (no pun intended) and no spices to really let those in the sauce shine. 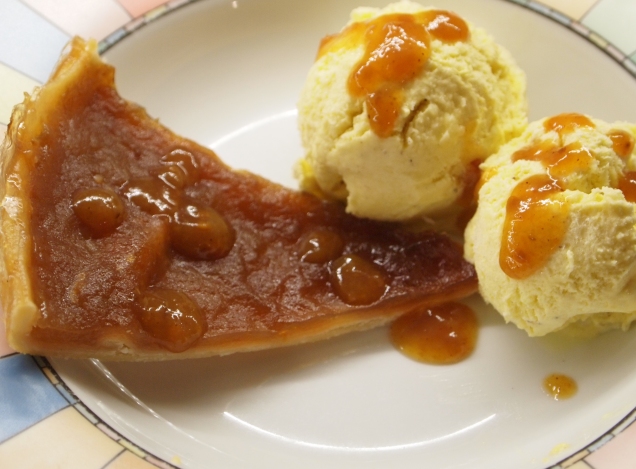 I don’t normally care much for bitter flavours but, here, those of the pepper offset the sweetness just a tad and wind up acting like the gentler sort that I found in Badger’s original reaper sauce.

Plus, the other flavours in the pepper come through a tad more when it’s on food, adding a different, not quite savoury but far from sweet element that I find almost reminiscent of tomato. A strange addition, without doubt, but a surprisingly welcome one regardless.

Smack m’Peach up! certainly isn’t going to suit all tastes but it’s carved itself a clear niche and it pulls its weight as a dessert sauce fantastically.

If hot honeyed peach and cinnamon sounds good to you, this is that taken a step further, with rather greater complexity and depth of flavour. You’re gonna love it!

One thought on “Peachy Keen”