Now, if you’re anything like me, you’re probably already wondering how relevant that spelling really is. It is, after all, a show about schoolgirls being spies, with no mention of chilli or anything like it in its synopsis. Is it just a misspelling?

That’s actually how the word “spice” is written in universe. With a Y, so that “spy” can be a derivative of “spyce user”. It’s a strange, fictional etymology but the show takes it and runs with it.

Their secret, anti-terrorist organisation is run out the back of an independent curry house, as a cover for their use of spices. Things like cinnamon, laurel, allspice and fennel all act as awareness-heightening drugs for their excursions, increasing both reaction times and the ability to process tiny details about their surroundings. Aiding both in combat and in more time-sensitive, stealth-based missions.

But it’s their hamburger curry that introduces our heroine, Momo Minamoto, to the world of Spyce and her ability to instantly detect its unusual blend that catches the interest of the rest of the team. Well, that and the naïve sense of hometown pride that makes her a typical anime protagonist.

Tsukikage, the organisation that she quickly finds herself a part of, may battle evil on a national scale but they are, at their core, just five girls who love the fictional japanese city of sorasaki.

Everything that they do comes from a desire to defend their own personal neighbourhood and way of life. Which is a strangely, yet pleasantly, down to earth perspective when the show’s threats are as grandiose as they become.

One which really solidifies the blend of action/drama and cute slice of life at the show’s core.

It’s not genius. It doesn’t make you think, like Full Metal Alchemist, and it doesn’t revolutionise a genre, like Shokugeki no Souma, but I, at least, was still drawn into its world. Still sold on its characters, despite their simplicity.

Release the Spyce may not have a deep message but it still demonstrates a character’s growth towards independence and adulthood, through somewhat fantastical means.

It’s a fun and enticing romp, with a fair bit of emotional weight to it, if nothing else. And, while that might sound a tiny bit childish and it never lingers too long on its dark themes, it definitely touches upon a few. Too many for me to rate the show below a 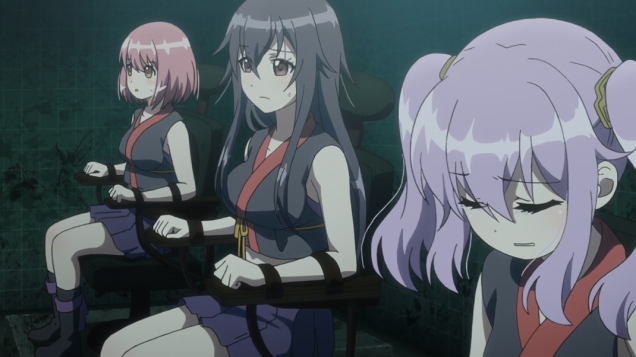 It’s not the next unnecessarily edgy, Madoka Magika wannabe but it’s definitely more of a coming of age story for those who can still appreciate childish innocence than a show for actual kids.

I did thoroughly enjoy it, though, for what that’s worth, and I would certainly recommend it if the premise interests you at all. There was far more to this show than I had initially anticipated and it now genuinely has me considering a thigh holster for my spices. You know, just in case.

And that’s just about all that I have to say for today. The only thing that remains is the anime fan tradition of naming best boy and best girl.

Best boy, this time, is a little tricky. It would be wrong to treat the show’s transgender woman as male and the little kid that I would otherwise have given the title to turned out to be more female than I thought, as well. Which, I suppose, leaves the unnamed butcher who’s stall fills Momo’s stomach before and after excursions as the only viable candidate.

For the girls, however, there’s almost the entire cast to pick from but I’m a sucker for the secret badass done right. Momo’s idealism and Mei’s free-spiritedness both have their charm but it’s Goemon Ishikawa, commonly known as Goe, who comes out on top for me.

And, should you ever spot me at an anime convention, chilli fest or comicon, just speak the secret phrase, “extra garam masala, no honey”, and I’ll be sure to have a special taster on hand.

Until then, catch you next time,